Growling as the yellow incandescence of disinterred anger lights their faces into view the ‘new’ mug of this old and long-embittered Rockville, Connecticut sludge metal band looks as if it’d gone unshaven for at least a week or two. Loneliness and depression have their own desperate smell but man, does frustration and anger reek when it ventures out of doors and starts to yell indiscriminately at the damned fishbowl we’re all suffocating under. Cable might’ve just dropped out of the dark after a decade of unrest but they’re not showing any signs of rust beyond their sixth full-length ‘The Failed Convict’ (2009). So, who are they again? At it since 1994 and originally formed in search of post-hardcore influenced metalcore wares it’d be their third album (and second for Hydra Head Records) that set Cable on a sludge metal trajectory and away from the quickly aging avant-metalcore game. ‘Northern Failures’ (2001) was the general blueprint for the sometimes atmospheric but typically forceful blend of sludge/doom metal that borrows from all manner of darkness they’d experience in life. The jagged southern rock influenced sludge verve that’d come to them as the post-millennium arrived would more or less stick from that point, still informing the nigh nihilistic levels of discontent fueling their latest album, ‘Take the Stairs to Hell’.

Short, hard as nails, and probably having more fun than they’d ever let on, the full listen to Cable‘s seventh full-length struts into an easy groove from the start that’ll push right past you if you don’t take a moment to appreciate what they’re up to. “It Cost Me Everything” busts its way into a set of riffs worthy of Maryland’s mid-90’s doom metal scene (alternately, a band like Deadbird) that quickly grinds gears with several blackened guitar tirades that resemble the more recent modus of groups like Tombs (Mike Hill guests on the title track, even). “Black Medicine” is the one, though; That second track is the shredding, death growling, howling, puking, and hard-grooving throat grabber that represents a major point of interest on early impressions that got me hooked on Cable‘s tormented vision for ‘Take the Stairs to Hell’. The hardcore kicks don’t really jump in until the slightly noise-rocked “Low Man”. The drums on this song might vaguely clue you into why they’re hitting so hard (besides the typically thumping Audiosiege treatment) as new drummer Alex Garcia-Rivera (Bloodhorse, American Nightmare) brings as much boom to his kit as he had for the deeply underrated ‘Horizoner‘ a decade ago. Without doing a full-on track by track review it’d be fair to say that the rest of the album is is no more and no less adventurous beyond the first handful of tracks where the majority of these songs are sludge/doom metal pieces that range from 3-5 minutes and feature some elements of post-rock to gild their raw-ribbed sludge edges.

‘Take the Stairs to Hell” is a dark and serious record that is unwavering in its intimately sorrowful frustration but at no point was I sure what it was all about beyond what the band have remarked in terms of the last several years being Hell for the artists. Most of this album appropriately reflects a mind entrenched in debilitating circumstances and lashing out in anger as a result; It seems they’d really taken their time with most of these songs written between 2014 and 2018 and as a result each hones in on a feeling of anger and isolation that is more daunting than it is cathartic. I guess I’m of the ‘older guard’ of sludge metal in that it should come from a place of mental poverty, a sorrow and a rage that are simultaneously felt from a place of doom. Uncontrollable mania in the face of depression informs the subject matter but not every moment of ‘Take the Stairs to Hell’ is a massive emotional drag. Cable really fit the vibe of ‘classic’ sludge metal ethos without creating steadfast from a traditional template of sludge metal; The result is a rawly imaginative record that is never so daring that they’d lose the plot. There are a few minor issues that become irritants at a certain point of familiarity, though. If the bulk of the tracks on this half hour record weren’t so evocative, heavy, and driven by pure doom metal I’d say ‘Take the Stairs to Hell’ is about one song too short, especially considering the final track (“Come Home”) is an eerie ambient piece performed by Crone.

Just as you can tell when a lot of ‘love’ has been put into a final product so can I suggest that plenty of hate fuels this record and the details within. At no point does this anger create much more than a compelling mood for what most would consider a slightly ‘modern’ take on doom metal with a heavy dose of sludge and post-metal tonality, but it all coalesces strongly enough to create a somewhat distinct style. Though I went back and forth on this record a fair amount I kept coming back to it often enough to accept the smaller flaws that slowed down the full listen, such as the outro track. ‘Take the Stairs to Hell’ comes with a fairly high recommendation, primarily aimed at sludge metal fandom. For preview purposes I’d suggest starting with the provided single “Rivers of Old” but not making any judgments either way until you’d sat through the first four tracks in a row, with emphasis on “Black Medicine” and “Low Man”. 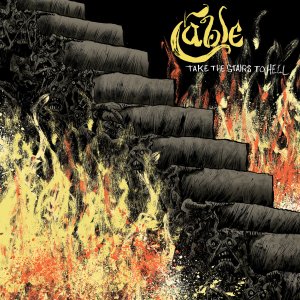