Deep beneath the shadows of the cemetery treeline lay the disturbed soil of a shallow grave he’d watch at night from his bedroom window, the discoloration of the ancient graveyard’s spot of tilled earth a badge of torment he’d wish no longer wear. The late hours cursed deeper with every silent tick of the digital, yet somehow forever incorrectly set, clock at his bedside. With a palm over one eye and a nigh-browned bloodstain grasped like shame in the other he leers as if the dew-whetted soil were translucent and some manner of immortal creature thrashed an early grave therein. As a prelude to his broken conscience and interminable madness it would be the third true summer night of a woefully haunted year when the beast within his mind ceased growling. From the disturbed plot of dirt a sinister phantom set at a piano with eyes affixed upon his very soul, staring back at him through his anxious perch at the window. His eyes could see the death beneath the Earth and the auræ of their suffering spreading through the soil and into each house of suffering within radius of grief’s curse. Fixated upon by the suffocating tendrils of the buried dead and poured full of each eternity the mind of any man would become too chaotic to restore to meaning and there it snapped inside him, a hundred sleepless nights in poverty of feeling and a wealth of paranoia there erased him from all place and time, made eternal with the mind’s eye-connection beyond death he’d become the reaper and just one among uncountable murderers tormented by the perpetual damned. Looming in the corner of the human mind coughs this hypnotic darkness, an offering of chaotic evil among the death-obsessed in Reykjavík, Iceland given form by the name Andavald that’d conjure misanthropic possession with the rasping polemic of ‘Undir Skyggðarhaldi’.

With the palm of malevolence upon my skull I did collapse under the opening salvo of the dread Andavald would choose to introduce themselves with, as if they were petitioning the listener to dissolve out of fear. Enter warmly lit extreme doom music’s well-blistered feet that’d cool in the night, a newly functioning blackened crawl would allow new skin to grow beneath the calloused layers of wear. These layers represent the various stable currents running through this somewhat tormented line-up of impressive musicians whose resumes include Mannviera, Draugsól, and Naught among others. The whispered rasps and dissonant crawling atmospheric black metal layers of ‘Undir Skyggðarhaldi’ extract their hidden depths slow and with menace unsheathed within the blindspot of the listener, it creeps within the psyche like a snake towards a bird as prey. Three well-shaped dirges oppress and delight the patient mind from here as the senses are strangled and the theme of unwilling possession is delivered with clarity though it is somewhat overshadowed by the agony of the process. By the time the title track has rolled through its motions you will either have been through a transfixing hex or checked out entirely within the perpetual movement of it all.

The doomed and sometimes discordant surges of early Carpe Noctem, transitional works from Chaos Moon, and the glacially cruel fixation of Lurker of Chalice only begin to describe the actual tone of ‘Undir Skyggðarhaldi’ which is never propulsive but always emanating some ruinous mid-paced blackness, some measure of downward spiraling sanity. There is certain poetic value to the full listen but, you’ll have noticed by now that for all of the shadowy language I can throw at it — the face-value assertion that these are somewhat shapeless ‘in the moment’ pieces is true enough. It all bleeds together into a mush of ringing guitars, seemingly four channels all fighting for space and creating tension in their delayed polyrhythmic blanketing. The experience grows to become unnerving, grating, and pure torpor until A.F.‘s (Draugsól) vocals push these swells along out to sea. The experience isn’t altogether corporeal but a ringing in the ears and a siphoning of mental energy that amounts to a personal dissolution and all that I’d suggest is that it isn’t a ‘riff’ album or one of specific moments that define the mass of its movement. Instead,’Undir Skyggðarhaldi’ reads as a haunting aimed squarely through the ears of the listener, a catharsis of possession and a loss of control that becomes suffocating pain upon the moment of captivity.

Dependent as I am upon moments that grab me there is some thrill to a black metal album that snakes it way around my senses and breaches the holes of the subconscious to some dire effect. Andavald have crafted an experience that’d tear apart the fabric of black metal with subtlety but without grace and plant down its own chaos in the midst; There is no redeeming takeaway here, the only result is devastation and misanthropy for the listener and as uncomfortable as it is to have gotten so close to the black flame of ‘Undir Skyggðarhaldi’ it remains a worthwhile experience to sit and feel the torment it brings. Highly recommended. For preview purposes I’d suggest the opening duo of intro ambiance “Forspil” and “Afvegaleiðsla” are the only reasonable place to introduce yourself to the greater whole, which is arranged (and flows) intentionally from start to finish. 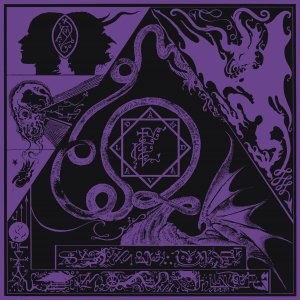