Two plagues are presented as black and shining mirrors upon the eye-clawing masses made hysterical by the burning world around them. Two wraiths of Satanic majesty growl downward-flowing formulæ by their own hand and mouth as the curve of the bellowing horn grows wet with the blood and spit of the fanatic. Two deaths crow mercilessly the pulsation of the hungered void as the cessation of all life beats a heart from the very chest of death; A rib-cage of eternal reclamation, a chasm piled with worthless creations slowly melted down to caustic bile and shat into more worthy fuel for chaotic higher being. A dream-like eulogy and a reinforcing sermon are made flesh untouched by light in the hands of New York, New York duo Ordeals whose desolation wrings its bloodied hands of lacerating melodic blackened death metal, their grasp again thrashes amidst the majestic reaches of the elite order on this their second EP, ‘Choose Death’.

A devotion to obscure and majestic Satanic black metal pairs well with cult death metal bellows in conjuration of the distinct two-headed hydra that bears Ordeals. Vocal work that recalls Infester, an almost Finnish death hurl a la Interment or Carnifex (the Finnish ones, in both cases), lends an imposing skull-filling rapture to the increasingly melodic poignancy of this duo. ‘Choose Death’ finds the two separated most clearly in style between guitarist/bassist Illuminated‘s work in blackened death/thrash project Throaat who sport a similar obsession for the obscure and spirited dark. When I’d reviewed Ordeals‘ split with Daethorn last year I’d remarked that a deeper shift towards Epoch of Unlight or early Abominant style melodic black/death metal appeared on the horizon but ‘Choose Death’ shows that their ambitions are deeper blackened and ultimately uninterested in anything driven by what could be considered precocious simplicity. The standards are higher and this perceptible leap forward makes great sense as these four tracks are gripping, memorable, and marked by spirited performances.

“A Throttled Dream” is an immediate blistering of the mind as its Necromantia-esque opening riff scrawls its way through sprays of fluid melodic black leads and blackened death motion. The sinister plague incantation that precedes the song serves to heighten its morose, misanthropic affect and though the extreme doom metal feeling of ‘Apotheosis’ (2016) is dormant throughout this 7″ the atmosphere thickens at a more deliberate pace. “Choose Death” is a spiritual defiance that employs an early Dawn feeling guitar arrangement that’d provide a sullen narrative beneath Zealous Hellspell‘s building menace; The eruption of this song is a shout aimed at the cosmos, a tormented Bölzer-like howling tirade that crowns Ordeals‘ unique melodic achievement with a resonant bellow of empowerment towards the finite being. Short as this experience might be, the meticulously pruned and captured pieces included within ‘Choosing Death’ are pure impact, every note is meaningful and every word equally intentioned. Distinct, considered, deliberate, and invoking a sound immediately identifiable as Ordeals for the initiated. Arrive now and receive them in this succinct form as no doubt further ambitions will produce weightier, more complex beast to digest. Very high recommendation. Though the entirety of the piece is around twelve minutes and I couldn’t recommend just one side of the 7″ over the other, I will say that letting ‘Choosing Death’ repeat for three or four full rotations in succession is the most appropriate bout of consumption. 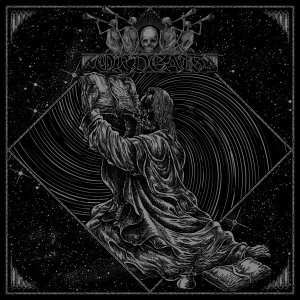