From the perspective of Fatal guitarist Tony Hamera circa 1990 there was little to no support for their brutal form of thrash metal after half a decade of throwing their weight around the greater Midwest United States whilst accompanying incredible cult bands like Angkor Wat, Devastation, Exmortis, and even Goreaphobia. It’d turn out their first EP that same year was their last release to date as thrash metal fell out of interest and death metal ruled the underground. Hamera would essentially drop Fatal‘s ambitions for the sake of a career as a sound engineer in Ferndale, Michigan and there the band would cease. Trouble is, Fatal fucking killed! Three demos that build up towards a powerful death/thrash style and a 7″ EP that gilds the relatively boring output from Thrash Records is a killer enough legacy to be worth remembering and thankfully Fatal‘s output has been treated well within a couple of retrospective releases between Necroharmonic and Hammerheart Records compilations. It’ll be a relatively short trip but each of these succinct pieces should add up to a fine evening’s worth of brutal thrashing madness. Hey! I’ve done my best to research as much as I can but please feel free to message me (grizzlybutts@hotmail.com) or leave a comment if I’ve left out anything vital or gotten something horribly wrong!

At roughly 24 minutes ‘Guts for Dinner…’ is not only the longest release from Fatal but also the most clearly Slayer influenced piece of the bunch, with a primitive and brutal speed metal attack that I love for its resemblance of Slaughter and pre-’87 Hallow’s Eve with a gruff vocal and some grinding riffs. It sounds like this tape only had one guitar track as the rhythm guitars cut out when the (frankly shit) solos kick in. Flippant as I might seem about it, ‘Guts For Dinner…’ is a fantastic demo that showcased some real style in terms of rhythm guitar and pushing out riffs that characterized each song. There is something ancient and pure about this sort of harried NWOBHM influenced speed metal with a maniac on vocals and the single guitar track conveys the raw feeling of a rehearsal or live set. I listened this demo the most when the first compilation came out in 2005 (‘Retrospective From Hell’, Necroharmonic) and have always treasured the naive early Bay Area jut of this, kind of like Holy Terror in some respects. 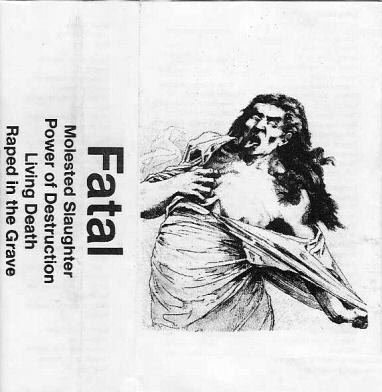 At this point Fatal had been exposed to more bands, played with several extreme folks and their sound would progress in that same direction of brutality and, in this case, frantic fucking grindcore influenced death/thrash metal. ‘Molested Slaughter’ sounds quite a bit like Westland-area death/thrash/grinders Infect who guitarist Tony Hamera had joined on guitar for (I believe) their second (‘Germs’, 1988) and fourth (‘Face the Infection’, 1991) demos. I love the grindcore influence on this one because it still sits in the thrash metal realm a la Righteous Pigs and Atrocity (Connecticut). I’ve linked the song “Raped in the Grave” to start because I felt like it was the most representative of Fatal‘s actual musical personality, many of the songs here are all over the place and wouldn’t point to their next step towards a purer state of death/thrash. I absolutely love Mark Nowakowski‘s vocals on this demo, he sounds fucking nuts when he breaks into those Cryptic Slaughter-esque rants. Otherwise I think they’d taken some cues from ‘Darkness Descends’ along with the more frantic death/thrash out of the Midwest at the time. This is a bit under-loved, even by the band at the time, but I still get a kick out of ‘Molested Slaughter’ every time I listen to it. 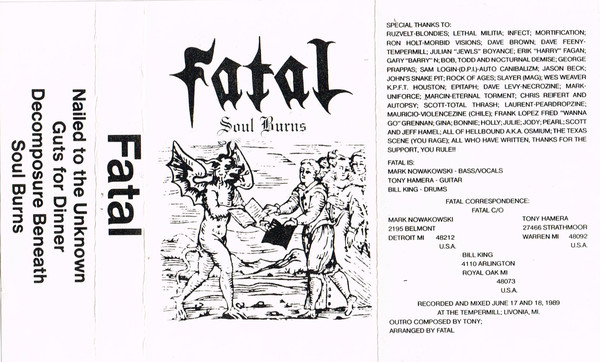 Here we land upon all of the right stuff happening at once. First, it was clear that Hamera had been putting in the work on guitars. We’ve got what sounds like four guitar tracks (if you include the harmonized leads) a rich enough bass presence with a heavy tone, and new drummer Bill King elevating Fatal‘s sound to fully professional with his frantic but precise style and a godly understanding of where to place fills within punchy death/thrash metal songs for impact. They had to be damned happy with this on some level as it was a leap their material had deserved since that second tape. I felt like the stage was set for a full-length on par with Num Skull‘s ‘Ritually Abused’ when listening to this demo. ‘Soul Burns’ sounds infernal, a little bit Morbid Angel to start (“Nailed to the Unknown”) but with the spirit of speed metal a la Infernäl Mäjesty fully stomping around. They’d matured past pure speed-fucked antics and again, I cannot overstate how much King lifted their capabilities as a whole. 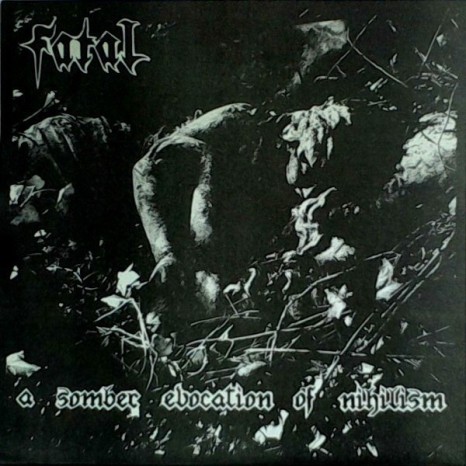 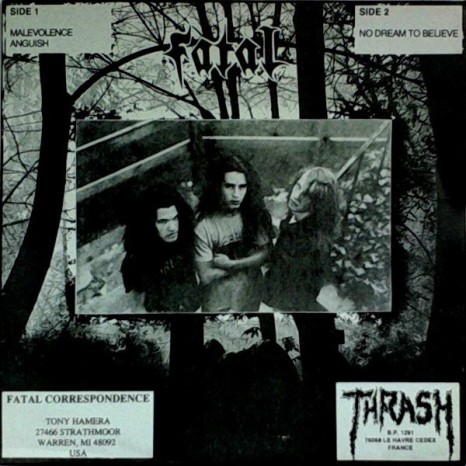 Remember that final Nocturnus EP before they split up? This final release from Fatal has that same sense of bounding ‘last gasp’ energy where they really put all of their fuel into these songs and intended to blow up from there. In all fairness, they certainly deserved to based on this material. For 1990 these are sharp-edged semi-technical shredders, pure death metal songs that are twisted and violent without relying too much on double-bass drummed brutality to get their message across. I suppose Thrash Records was dodgy in terms of getting the word out and to be fair, Fatal still sounded like a thrash metal band when they dipped into their more intricate ambitions. Interestingly enough, interviews with the band around this time often remarked on an increased interest in ‘doom’ sections and some likening to early (this was pre-‘Gothic’) Paradise Lost and this provides some interesting context that most wouldn’t hear otherwise. Hamera was apparently pretty obsessed with shred guitarists around this time but still pretty humble about his own skills. As far as I know a tape version of this EP was made/planned that included one extra song (“Profane Incarnation”) but this song has never been released on either compilation.

Depending how much you connect with these songs you might feel differently but I don’t carry any sort of harrowing existential dread in not getting at least a full-length from Fatal. It seems unjust on some level but it appears the band was dropped for the sake of other interests and engineering ambitions. The fact remains that they had riffs, they put them to tape and everything Fatal released was either quality thrash metal, death/thrash or death metal and in each of their releases might’ve been formative in some sense but their steady progress remains an impressive document of Midwestern extreme metal in the late 80’s. Normally I’d recommend the most essential releases of the bunch here but I think I’m better off recommending the Hammerheart Records anthology because it is the best sounding of the two compilations of their material and it is arranged chronologically so the progression from demo to demo is that much more pronounced and comes with sense. If all else fails, the ‘Soul Burns’ demo is really the biggest moment for my own taste.