United by the excitement of death metal’s terror amongst the thousand lakes the earliest threads leading towards the Grave Siesta of today began in a garage full of teenagers in Mikkeli, Finland around 1990 where the death metal to stoner/doom metal progression of Caricature would likely coincide with the collective discovery of marijuana. By 1994 they’d drop the old band and form Rite who’d serve as a multifarious and cheekily deviated blend of stoner rock/metal that could veer from punk to death n’ roll on a dime and Hell, they stuck with it for sixteen years until a hiatus was necessary in 2010. From there it was Grave Siesta time for the duo of drummer Juha Kivikanto and guitarist Sami Lintunen who’ve more or less played in the aforementioned bands together for thirty years at this point. Their focus would shift towards doom metal, and I don’t mean anything ultra-traditional or particularly Finnish either but, what I’d call fuckin’ weird stoner/doom metal with a healthy amount of 90’s Scandinavian stoner rock oomph in the vocal delivery. Now nearing the decade mark for the band here in 2019 we’re gifted the third full-length from the band in the form of ‘Voidward Spin’ which finds them hitting upon their most ‘traditional’ heavy/doom metal side thus far while still keeping it hairy enough to feel like a Grave Siesta record.

No doubt in my mind that what got these guys geared up for music at some point along the way was the music of Lee Dorrian and more specifically the early transformation of Cathedral from death/doom towards stoner rock/doom metal infamy. Why? Zip through their body of work and you’ll hear it left and right in spirit and in the case of ‘Voidward Spin’ we’re greeting by a romp ‘n stomping howler in “Vacant Throne”. From that point they diversify wildly to the point that the unpredictable ‘try anything’ mentality of the band was the main reason I’d kept coming back to Grave Siesta‘s latest record these last several weeks. I guess I’d call vocalist Taito Halonen a bit of a maniac for his performance here, though he had quite a range of expression to work with ‘Voidward Spin’ has pulled a bit more out of him than previous and its made for an impassioned doom rock record. The two major sides of the coin are the scowling stoner/sludge metal vocals (“Weakness”, “Seizures in a Castle”) and Hour of 13-esque singing (“Depopulation Prayer”, “Bastardized”) that give some duplicity to the experience but there are ‘cleaner’ vocal moments as often as there are deathly grunts (“Vacant Throne”, “Post-World Peace”). It all works quite well side-by-side though the flow from song to song can be somewhat curious until you’ll know the full range of the vocals, they don’t smooth it all together quite as well as say, Cardinal’s Folly have but the variety lends itself to repeat listening all the same.

“Depopulation Prayer” was the main event that sold me on the record during my initial full listens and with that track in mind I’d say Grave Siesta carry with them a fully impressive grasp of the Sabbath-based musical language of doom. That they would hit the hardest within the most apocalyptically obsessed tracks on the album, generally Side B, might speak best to its inspirationally doomed anthropocene theme and the general ‘feeling’ of the record as a whole. There is frustration and defeat in the songwriting here that feels more and more distant from the tongue-in-cheek lyrics of the previous albums, which I’d say is more my own preference even if I’ve admittedly not read the lyrics closely to be sure. More than half of the tracks here stuck with me for their gloom, their aggressive motion and the sorrowful gnashing of the more doom focused side of their sludge/doom/stoner metal mutant existence. Though I’m no purist I did find myself, again, leaning towards the more resonant ‘cleaner’ (sometimes a bit tipsy sounding) doom metal drawl of certain songs and I’d just generally wanted more of that and less of the hissing n’ spitting sludge style; It all balances out nicely by the end so, it is a minor point on my side.

There is a very important delineation to be made between a band that tries to do everything and does nothing well and a band that does a lot of things because they’re fuckin’ weird by nature and good at what they’ve developed over time. Grave Siesta are the strange fellows who’re prone to staring off into space imagining worlds beyond worlds, and the type that’d never rest into a niche for the sake of comfort unless it was carved by their own hands. I’d say they’ve hit upon something special and altogether enjoyable to listen through with ‘Voidward Spin’ and I’d give high recommendation of it. For preview I’d suggest “Weakness” and “Depopulation Prayer” are just incredible tracks to introduce yourself to first and then make sure you give the pairing of “Vacant Throne” and “Intolerance” to see how well the many sides of Grave Siesta‘s dice roll together into one glorious form. 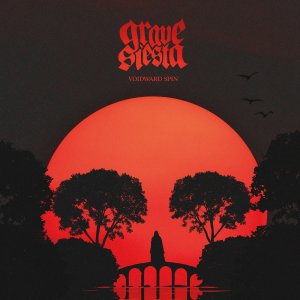