Of all of the thrash metal bands to crop up out of the greater Cleveland, Ohio area in the mid-to-late 80’s Terror have perhaps earned a place in underground metal history as dedicated, hard-living and surely most rabid among the bunch. The early years were a trip with short one-sided demo tapes with dubbed porn clips in between songs and ripping thrashers that’d make Hallow’s Eve and Rigor Mortis blush. I don’t have any first hand information and Terror is fairly new to me so if any of y’all out there have info to contribute or reminisce over, don’t hesitate to chime in in the comments down below. The big story here and the most characteristic narrative that we’ve seen several times before is a Slayer influenced band being open to death metal ideas as they see the end of thrash metal around them; This is the case with Terror but they’d never get a record deal from any of the eleven or so demos they’d release between 1987 and 1995. This time around I won’t be digging into related bands for the sake of brevity but don’t hesitate to look for some offshoots and nearby projects with Mystik, Blasphemy, Paralyser, Funeral Pyre, Witchery, Harlot’s Grip, and Soulless. Each of those bands (the Ohio ones) has been touched intimately by a member/ex-member of Terror though the earliest line-up is largely deceased at this point. Hey! I’ve done my best to research as much as I can but please feel free to message me (grizzlybutts@hotmail.com) or leave a comment if I’ve left out anything vital or gotten something horribly wrong!

A couple things to note before kicking into this early set of short demo tapes: You can grab the ‘Decades of Terror’ compilation from Stormspell Records through their CDBaby account or Hell’s Headbangers for a decent price and it covers I think everything pre-1991 before the band shifted towards pure death metal. Otherwise I’ve provided links of varying quality. Secondly, there are no tape covers for the majority of Terror‘s demos as far as I can tell. This first demo is characteristic of their style and sound right from the start as a bunch of teenagers cranking out primitive thrash metal performances around three songs at a time with at least one porno clip in between. Apart from the Overkill “O” in their logo Terror appeared more or less infatuated with the first two Slayer albums along with local underground acts of the Cleveland area. This first demo is unique in the sense that it is the only recording from Terror that doesn’t feature guitarist J.J. Sekula (RIP) who is probably best known as a founding member/guitarist of Mushroomhead.

The second demo from Terror was the band proper now with two guitarists as J.J. Sekula was included. I always felt like the versions of these songs from the first demo sounded almost the exact same but you’ll notice vocalist Mark Jones‘ cadence has changed and he becomes slightly more expressive a la Hallow’s Eve and some of the riffs begin to resemble early Rigor Mortis or even (early) Dark Angel at times. They’ve not changed up the speed drastically but this tape is just a bit tighter than their first one. I don’t think this first year of demo tapes from the band offered anything incredible but, definitely showcase a hard-assed sense of rhythm that surely calls for cover versions by way of primitive black-thrashers today

With all prior members out of the band by 1988 beyond the two Sekula brothers and the one-time appearance of Paralyser drummer Eric Birris (who would commit a murder-suicide in 1992, apparently) Terror would release an official rehearsal tape as a three piece in 1988. ‘Targeted For Assassination’ is successful in the sense that it showcases new songwriting ideas and leaves the older sessions behind, eh well this time there are even more porno clips. I like the ideas Sekula had brought to Terror‘s sound in general but this isn’t his finest guitar work for the band quite yet, if anything Birris really shines on this rehearsal despite being fairly low in the mix. 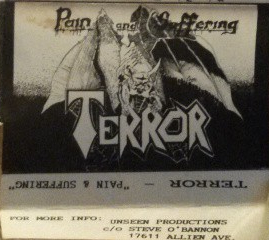 Pro-tape, clean sound, and generally well-produced bit of thrash metal from a band that should begin to remind you of Sacrifice, Rigor Mortis, and even Slaughter/Strappado at times. ‘Pain and Suffering’ was the slickest sound from the band yet as they entered 1989. The addition of one-time bassist Joe Cox and drummer Vic Novak really gave a good shove forward for Terror‘s pacing and general precision at this point but, the songwriting hadn’t yet benefited from the shift towards a darker, faster tonality. Brian Sekula‘s vocals are classic death/thrash venom at this point and the cleaner vocal style of earlier demos appears to be long gone at this point. The big song here is the later Laaz Rockit-esque rythms of “Prophet$” and that open wah pedal kinda guitar tone, I really get a kick out of that song each time I listen. Not a huge leap forward for these guys but a transformed band by most standards.

At this point we’ve been lucky enough to have been faced with appropriate demo quality sound for the late 80’s era but ‘Carving Techniques’ is by far the worst sounding recordings Terror ever officially released. Recorded as a trio, this time with “Deadly Dave” on drums who was also playing in Mystik at the time and would apparently die from an accidental gunshot in 1995. I’m not trying to be overly morbid here but there is some looming sense of tragedy in researching the deep past and darker side-effects of hard living by way of the harsh 80’s underground heavy metal climate.

Recorded live at the Electric Banana in Pittsburgh, PA in early January this set of songs would largely appear on the next studio demo so, this is meant for the completionist or anyone interested in on stage banter. The only thing notable here is that the bassist (Toby Wulff) would join Embalmer soon after and play on their first couple of classic demos. Don’t get too excited about that, though, you can only hear him during the gnarly rock solo in the middle of the title track. 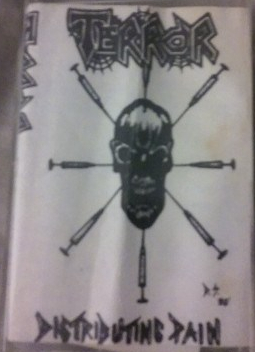 This is the point of transgression where the aggressive brutal thrash metal of Terror past would make the savage leap towards death/thrash metal without fully committing to the death metal side of the band. I hear a bit of early Death and Sadus in their sound this time around unless I’m mistaken, but the attack of this demo is the real draw. Drummer Vic Novak appears to be working with double bass drums and this really revs up their machine. This and Mortification‘s (Michigan) demo are two of my favorite gnarled up mid-west death thrashers of the era that go one unappreciated. The original masters of this tape were burnt up in a fire and they’d distributed fifteen copies at a show the day before without saving a copy for themselves so it seems like they had to track down copies and dub them between boomboxes and scrape together what they could from outtakes. I believe the version I’ve linked is the original but only because it is the six song version whereas compilations have only included five at this point. Could be wrong.

‘Terror Entombed in Terror’ was a major high point for the ‘original’ line-up of the band featuring both Sekula brothers and Novak. It isn’t the cleanest demo from the band to date but much of that is due to tape decay from the sound of it. At this point they were a death/thrash band and it might’ve been evident that this death metal direction was Brian Sekula‘s vision more than the other two as they’d leave soon after. I felt like at this point he’d heard Morbid Angel‘s debut and it’d changed what he wanted to do with the band. Novak would join black metal project Funeral Pyre and J.J. would join alt-metal band Mushroomhead. The lead guitars were really the bigger success of this demo and the Blood Feast / Rigor Mortis horror thrash feeling would’ve gone over well if a full-length had come from their last two demos worth of songs. Not sure why that never happened but it seems disinterest, stylistic changes, and line-up shifts kinda kept this band down for a long-ass time.

Everyone but Brian Sekula was out at this point and I believe he (or J.J.) had a son at this point because a third Sekula born around 1991 has played guitar in Terror since the reformation of the group around 2014. Two members of thrash/groove metal band Famine (later Lowdead) would join him for this curious double-bass thumping death metal demo that didn’t have even a trace of the bands thrash metal past. Think along the lines of early United States death/doom and maybe a hint of the first Paradise Lost album but with an almost artificial drum sound. I find the atmosphere of this demo really interesting but none of it translates into discernible songs because the drums are so blown out. 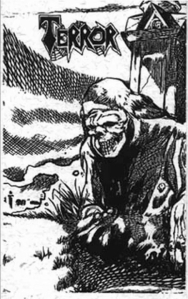 It comes as a bit of a damned surprise that the final demo from Terror‘s body of work is one of the best things they ever did but it comes with a small caveat: This is the ‘Terror Entombed in Terror’ drum tracks, those songs, but everything else (vocals, guitars, bass) had been re-recorded in 1995. It is slick as hell and almost feels like at proof from Sekula that those old ideas could have translated beautifully into pure death metal had they stuck with the project. His sludgy guitar tones and wailing lead guitars should scream early Cianide (or Obituary, or Viogression) in your ears and fuck if this isn’t a brilliant piece of “What if…?” set to tape.

From there releases from Escalation Anger, Funeral Pyre, and Bloodsick would follow from Brian Sekula and he’d spend time in Nunslaughter as well as engineer ‘The Horror of the Truth’ by Morpheus Descends and mix some Incantation releases in the mid-90’s. Novak would go play in Unified Culture and Lord of Absynthe. J.J. (RIP) would, again, continue to focus on Mushroomhead until he was replaced in 2001 due to drug use. I had a blast going through these demos, which more or less represents these folks going hard at their metal obsession during their teenage years up until their twenties. It is a shame we’d never gotten a full-length but the full progression from primitive thrash towards sludgy death metal is a trip. The really essential stuff includes ‘Distributing Pain’ and ‘Up From the Grave’, so I’d recommend that most but it is all pretty ripping stuff if you’re a death/thrash demo head.