Brothers Takis & Alexis Dalamitras formed Stigma (Στίγμα) in 1985 in the town of Kato Milia which was a part of Petra in Greece at the time. An anarcho/hardcore punk from the start, they were known for their rebellious lyrics which were sung in Greek. This is only worth mentioning because it was considered a somewhat limiting choice that’d won them some underground cred at the time, well, before they became a thrash band on their third demo. If you consider the entirety of Stigma‘s demo only existence in the 80’s and early 90’s you’d be smart to look towards Epidemic (United States) for comparison as most of the tape trading metal world would discover them as a brutal and atmospheric death/thrash metal band. I find Stigma fascinating because they were so ambitious with their style changes from demo to demo that they truly never had just one identity they wanted to settle upon, at least until decades after they’d split up and decided to reform as a hardcore punk band again. The clincher is that they were actually pretty good at everything they attempted and even won the attention of Wild Rags records back in the day for the late release of ‘Sickness of No Survivors’ just as the band had folded. This will be a rough ride but an important and interesting one for people who are interested in the development of extreme metal throughout Greece. Hey! I’ve done my best to research as much as I can but please feel free to message me (grizzlybutts@hotmail.com) or leave a comment if I’ve left out anything vital or gotten something horribly wrong!

This first demo from the band is sometimes stated as 1986 and 1987 depending on the interview but most agree upon 1986 for the actual tape release. Their first order of business was adding Vasilis “Riko” Spanoudakis on vocals that year and then by 1988 Giannis “Tsiko” Taniklis replaced him. With this line-up they recorded their first demo in ’86, which contained four tracks… The line-up would also include Takis Dalamitras on guitar, Alexis Dalamitras on bass and Sakis Poulios drums. They moved to Thessaloniki in 1987 and have remained there ever since. Confused yet? Well, the records for the early days of this band aren’t very clear and the information on the demos aren’t well preserved. They were just an okay anarcho punk band with some crust influences that I would compare to early Heresy. Aggressive but also not very clever. Most information suggests there are four tracks on the first demo and six on the second, but this playlist includes five that appear very related and accounted from an original tape. 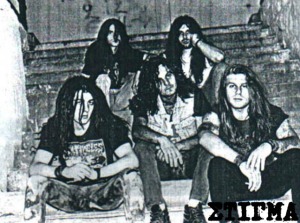 At this point we could say that Stigma had gone from typical European hardcore punk to typical crossover for the time. Two separate reports exist for this demo that suggest someone named “Kostas” provided drums, the other says that Lambros Megariosiotis and Kostas Fares provided the rhythm section for the six tracks on this tape. So, who knows for sure at this point but the story seems to be that the line-up changed when they moved to Thessaloniki. There isn’t much to note about this demo, it is pretty good quality for primitive crossover that leans towards hardcore punk with a vocalist who had maybe heard Kreator and decided to go for something more aggressive. “Technology, The Beginning of End” would end up on a compilation with bands like Death Courier and some interest from the more extreme metal scene would generate from there. By 1989 most of the line-up would be replaced and the two brothers Dalamitras would demo a death/thrash song as a demo/single entitled “Prisoned in the Guts of Heaven” which won’t be easy to find but you’re not missing anything important. The band was a five-piece at that point.

From that point they would shift back to using the English version of their name (“Stigma”) and begin focusing on a slightly progressive death/thrash metal sound sung in English. Many line-up changes had occurred between 1988 and 1991 but the line-up was fairly solid from that point with George Athanasiades on drums, Ghenas “Eugene” Tsaridis on second guitar and Nikos Garas on vocals. In 1991 a six song demo was recorded recorded in Rock Studios in sessions that also included Yiannis Koutselinis on keyboards. So, that should give you a hint at what their style had become overnight. It is one of the most thrilling death/thrash records from Greece in general and is maybe one part Kreator along with some ‘Beneath the Remains’ and even some great similarities to German death/thrashers Eternal Dirge. Some copies of the ’93 re-issue of this demo are still circulating today thanks to collectors of Wild Rags Records tapes. This demo is the reason anyone would mention Stigma today, they were just fantastic on this tape and any rabid death/thrash hunter should get a kick out of their combination of simple drumming and complex guitar work which gives a bit of a tech-thrash vibe at its best and remnants of crossover thrash at its worst.

The last recording from this revolving door of constantly shifting style came in the form of ‘Epitaph’ a professional demo tape with five tracks in an ominous and frankly exciting death metal style. Guitarist Takis Dalamitras would fill in on vocals after Ghenas Tsaridis had left. This ends up being one of the best things for Stigma‘s sound as Dalamitras was a far more brutal vocalist with a killer presence on this tape. It is such a crying shame that they split-up that same year because ‘Epitaph’ was where Stigma had hit upon something exciting and brutal as hell. Think of early Gorefest tonality but with the grandiose guitar compositions of early Nocturnus and Mercyless. Both of this bands demos are somewhat rough transfers in terms of what you can find online but that shouldn’t make their brief underground legacy any less worthy of examination. I’d say I probably lean towards their death/thrash sound more than their pure death metal sound but only slightly. “The Dawn Of The Undying Lamentation” might be the best song they’d ever written, though. The band would split up more or less immediately after this was released in 1993.

Stigma would officially reunite in 2010 as Στίγμα and they’d intentionally shift back to their Greek-sung anarcho punk style with some grind/thrash influences but very light ones. Their first full-length, ‘Η Ελλάδα Δολοφονεί‘, in 2014. I do no believe they play any of the old thrash, death/thrash or death metal songs from their past though some of the old hardcore punk/crossover songs were used in some form for the album. Ex-members would play in Wardogs, Infest, Landmine, Fire, and Madrake… Basically some underground Greek bands from various punk and heavy metal styles. If nothing else I’d say at least check out ‘Sickness of No Survivors’ and ‘Epitaph’ because they’ll likely surprise you with their songwriting, the demo tape quality is a headache though.