The blustery neon pink winds and flailing silk scarfs of the shallowest of 1980’s rock music hadn’t ever lost the ear of heavy metal but, the filth-ridden airs of pussy-chasing, guitar wailing balladry and cocksure strutting virtuosic twang was surely far less in fashion during my own formative metal years within the 1990’s. To see it now come into fashion after having grown up around metalheads wishing to crush glam rock and rip that teased hair metal from history conjures a reaction that I find truly hard to fight. Not only because of the burned-in notions of vapid and self-indulgent rock star bullshit but, because the millennial fellows writing those throwbacks are generally unskilled in terms of songwriting, reference, and do not possess the technical guitar skills necessary; To be fair, most are excellent in terms of costume design and modernizing the imagery of the bygone era; I can appreciate a general concept and aesthetic theme for a touring band. With this bit of perspective in mind you could easily excuse me for sneering at the general shift towards voluptuous 80’s heavy metal softness on this second full-length from German quintet Lunar Shadow, who’d sprung into the spotlight as a gloriously epic and slightly convoluted fantasy metal presence back in 2017. No less a heavy metal band today, their second full-length comes with a somewhat reasonable disclaimer that it may take a bit of patience to see the forest for the trees on ‘The Smokeless Fires’.

A wall of obtuse writ would obfuscate the actual joy of listening to ‘Far From Light’ when it’d hit upon so many unsuspecting true metal fans in 2017, myself included as I’d not come across their self-released 2015 EP ‘Triumphator’ when it was released. Every review read the same at the time: “Gorgeous harmonies, soaring vocals, jogging riffs, dual guitar attack is immaculate — But, the songs are long and amorous.” This was why it was so good, it was daunting, huge, an immaculate and pedantic undertaking that felt almost extreme in how ‘epic’ it actually was. What good is epic heavy metal that says ‘when’ as the liquid cheese of it all overflows beyond the limits of their proverbial dinner plate? The best songs on ‘Far From Light’ were the 8-9 minute odysseys of the soul-wringing high fantasy and nigh religious imagery and the same could be said for ‘The Smokeless Fires’, though there are half as many and they’re all shoved onto Side B. This is no major offense but I am slightly underwhelmed in realizing that those harsher vocal moments and weirdly progressive nods to 80’s US power metal have been traded for softer, plain moments.

Is there a “Cimmeria” on this record? Where they’d break into thrash, or something akin to the peak of “The Hour of Dying”? A major point of interest of that first album were the sojourns into extremity as the song’s narratives reached their apices. Those moments come, but it largely in the final two tracks “Hawk of the Hills” and “Red Nails (For the Pillar of Death)”. There I see a fully recognizable follow-up and improvement to ‘Far From Light’ but, that leaves the rest of the album to sort of prove itself to my ears. “Catch Fire” is perhaps the actual place to start as it not only showcases a new level of sophistication in terms of harmonized leads but also vocal arrangements from new vocalist Robert Röttig. From there the old comparisons to Borrowed Time and ‘The Awakening’-era Dark Forest seep away into the middle of the tracklist. This is a low point on the album (“Conajohara No More” through “Pretend”) with a style that I’d describe as ‘slow-motion Fifth Angel‘. It isn’t quite power metal and it isn’t full on Warlord‘s ‘Deliver Us’ in pace either so, it felt as if the energetic kick-off of the album might be a red herring and this wasn’t remedied until “Laurelindórenan” fires up a bit. I think my earlier comment about younger musicians not having the necessary skill to pull of 80’s heavy metal was of course hyperbolic and in the case of Lunar Shadow their skill on this recording is admirable, guitarist/composer Max Birbaum in particular shines throughout. Where I am not impressed is in the songwriting on that first half of the album, the opener excepted. It is a flailing mess, as if Dokken‘s softest era were attempting some kind of Queensryche-esque concept album. The majority of ‘The Smokeless Fires’ succeeds otherwise, particularly Side B.

Memorable as the main thread of lead guitars, galloping hooves, and piano-graced farewells on “Red Nails (For the Pillar of Death)” are as an experience it is third fiddle to the major epics that bookend ‘The Smokeless Fires’. “Hawk of the Hills” is incredibly over the top with it’s double-bass drum push into the first verse, the hints of ‘The Eye’-era King Diamond at the mid-point and even a bit of blackened speed metal beyond but by the time I’ve hit the six minute mark the shredding outro and final chorale isn’t necessarily anything special in the realm of ‘epic’ heavy metal or throwback power metal. “Catch Fire” is a bit more successful with its very well crafted intro and brief thrash metal thrusts, this is the Lunar Shadow that I loved on ‘Far From Light’ and well, there isn’t enough of it this time around. Because more than half of the experience is highly repeatable and gorgeously melodramatic I can at least moderately recommend this sophomore full-length from this promising German heavy metal unit. If you’re a bit more inclined than I am towards the Aqua Net generation of coif, the recommendation is quite a bit higher though I don’t think it touches the level of detail that groups like Haunt or Cauldron have brought recently. Moderate recommendation. For preview I’d suggest just going for it and starting with “Hawk of the Hills” and then try “Roses” to get the full range of the album in two parts. 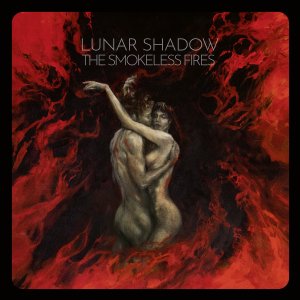