A bloodied path of singed flesh and relentless exorcism by fire exists ahead of any man, or sect, hoping to skate freely between realms of life and death. Katabasis is final in the minds of ignoble men but there is always a Tiresias in any tragic undoing, a soothsayer vibrant even in Hades realm, who’d spurn on any blood-drunk rites and give consult to the brave hero who’d seek freeing passage to the beyond and back. For their noble purposes and classic heavy metal stewardship it’d appear the passage between theatrically achieved 80’s heavy/speed metal and the daunting rhythms of early 90’s melodic black/death metal spiral out of control in the hands of Grenoble, France based quartet Sacral Night. A spell for the ages meant for ancient attuned ear their debut album swings a true metal sword with a serpent’s mask for a helmet and its scales bound upon shield bringing venomous blackened horror in spirit and wailing legendary axe down upon the gate between the living and the dead. ‘Ancient Remains’ comes with a reclaimed and protected unholiest vision held in both arms and swung down hard upon the unsuspecting traditional heavy metal fandom.

Surely anyone who’d ever placed Dissection‘s ‘The Somberlain’ next to King Diamond‘s ‘Abigail’ and felt some kind of glorious psychic connection beyond the referential cover art had been silently wanting bands like Satan’s Host, Tribulation or early In Solitude to make a serious connection and in some sense they’d almost gotten there (see: “The World. The Flesh. The Devil.”). You could maybe point towards Bewitched (Chile) and their ultra-cult second album ‘Dragonflight’ as Sacral Night‘s label (Metal on Metal) smartly does for a great approximation of what that convergence of second wave black metal virtuosity and classic King Diamond theatrics might be but few bands had reeled in both sides for something particularly listenable (for my tastes) until the release of ‘Darkness Process’ (2017) EP. If you’d fallen in love with that EP as I did, even counting it among the most underrated releases of 2017, then you might take pause for a moment and prepare for a moderate change of staff beyond that 2014-2017 era of the band which I’d say focused more directly on overlaying death metal instrumentation with a classic speed/power metal vocal. For ‘Ancient Remains’ Sacral Night have swapped out Silver Wind vocalist Antoine Volat for bassist/songwriter Florent Brunet-Manquat (Sanctuaire, ex-Necrowretch) while simultaneously adding a two new guitarists and replacing Elvenstorm guitarist Michael Hellström. It is quite the large shift in staff but I’m guessing a necessary one so that they could take the band more seriously with a more active festival and recording schedule. There is little to fear in terms of their sound facing any drastic change, though.

From the first track “Silent Night, Bloody Night” it becomes clear that theatrical values of Sacral Night‘s sound are dialed back just slightly from a King Diamond-esque personae towards a Hallow’s Eve-meets-Agent Steel sort of howl. It should be no surprise that Brunet-Manquat is a capable vocalist if you’re familiar with underground French heavy metal and his fairly standard presence in 80’s French heavy metal influenced project Sanctuaire. I’m sure there is a more exacting comparison for his vocal style that I’ve overlooked but think post-’85 evil speed/power metal. If this 80’s speed/power sound was the only point of interest I’d probably just shrug off ‘Ancient Remains’ as perhaps one of a thousand bands to release a traditional ‘old school’ dark speed metal album in the last few years but, their exploration of black/death metal rhythm ideas continues to express in an interesting way for the full-length. Sacral Night almost appear to have studied the possible connections between what bands like Portrait, Candle, and Attic have done in modernizing the King Diamond/Mercyful Fate sounds and turning away from a plainly polished rendering of it. Instead their rhythms invoke heavy metal with a sort of retro-reversion applied to their melodic black/death rhythmic ideas, taking a mid-90’s deployment and walking it back to about 1986 while keeping the double-bass drumming and guitar tone tempered to a Helstar ‘A Distant Thunder’ level of modernity. What in the hell am I talking about? It is a theatrically performed heavy metal album with restrained death metal drumming and riffs, which is somewhat in line with In Solitude or Tribulation in terms of modus without indulging in extreme metal vocals. So, more or less ‘Darkness Process’ but with heavy metal songwriting coming first and foremost, preventing the extreme metal aspects from overshadowing the craft.

Brunet-Manquat’s vocals provide gritty and vibrato-shaken charm to the full listen, echoing in presence and with a certain melodramatic horror applied to their delivery. My mind goes to ‘Death & Insanity’ by Hallow’s Eve but without the pedestrian thrash grunting and a heavy dose of classic French heavy metal. It all comes together a bit like ADX‘s hugely underrated ‘Weird Visions’ as they incorporated double-bass drumming and more complex riff patterns to modernize for the global audience beyond ‘Suprématie’. The distinction of extreme metal influences does kind of melt away as you listen and the cadence of the album will please fans of vocally driven 80’s heavy metal performances more than it will the speed (or black/death) metal addicted riff-mongers. Lead guitar melodies provide a trailing direction and general tension for each track while the rhythms section sometimes appears to create a separate polyrhythmic entity intent on following the ghostly vocal presence. It all comes together in a grand, haunting production that bleeds together into one ghastly sitting that thankfully limits its story to about half an hour. Any longer and I think ‘Ancient Remains’ would be in danger of becoming too repetitive and guilty of not expanding its general stylistic concept far enough. This could still be fairly accused if you’d been drawn in by the promise of something a bit deadlier, but I would argue there is a fine line they really can’t cross… The danger that they’d become ‘Of Human Bondage’ era Angel Dust doesn’t involve that many degrees of separation, drastic as that might seem.

With consideration for the amount of work it’d taken to shift from major line-up changes in 2017 towards a full-length today I’m impressed that ‘Ancient Remains’ retains the feeling and sound of Sacral Night‘s buzz-worthy EP and expands it into an unsettling, ghostly heavy metal album that manages to be ‘extreme’ beneath the bloody sheets. It does resemble a sharp blend of ideas that’ll surely need refinement over time but taken as is and in the moment this debut is a satisfyingly complex and uniquely arranged seaming together of two distinct worlds related blood but raised separately. It’d all seem like gimmickry if they ever pandered to the juxtaposition of classic heavy metal and extreme metal worlds, instead they blend them almost too cleanly like a weirdly shambling corpse that’d been animated by magic. The blasts of “The Blood Spattered Bride”, the empowered leads of the title track and the nigh nordic trailing leads and double-bass of “The Hexer’s Come” are so tightly integrated that it’ll all feel so unassuming until you’d taken a closer look and listen. So, I’m giving high recommendation of this album with the suggestion of giving it time to sink in as a grower. What it lacks in bombast it gloriously makes up for in conjuring such a precariously gloomy haunt. For preview I’d suggest the title track as an immediate hook to warm up to and then “To Conquer” which’d become my favorite track for its crypt-bursting operatic and satisfyingly convoluted rhythmic changes. 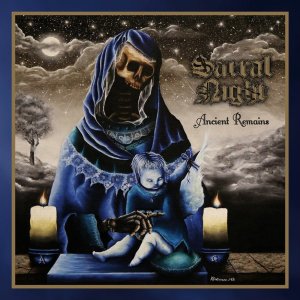