Creeping in the shadows of the deleterious London art-punk and noise rock-curious scenes flocks a piecemeal peel of members from anarchos Score, artisanal noise-wrangling punks Vinegar Strokes and (the most clearly related) gothy post-punk tinged heaps in Fex Urbis, who’d form the triply exciting prospect that is this first ultra-limited demo tape from Maladia. There is a lineage of mid-80’s Ginn, and SST’s vested interest in noise-rocked hardcore, in the mix as much as there is a punch of neo-punk psych-dystopia a la Glycerin (Japan) on hand for Maladia‘s first descent upon the populace. However impenetrable those references might be the infectious psychedelia-scorched post-punk scowling hardcore punk kick with a noise rock tail within deserves some vested attention.

Broken fisted LSD-chugging hardcore mutants were surely around before ‘In My Head’ era Black Flag but that’d be my first thought anytime I hear a catchy band whipping out the discord and fuzz’d gloom within 80’s hardcore punk structures. There was, however, a next level in bands like Wretched (Italy, see: ‘La Tua Morte Non Aspetta’) and that’d be my first thought when Maladia puts on their gnarly hats for “Corpse in Motion”, which isn’t too far a cry from a harder band like The Stains or todays Slimy Member. Yeah, we’re off in that mid-to-late Rudi Peni kinda place within this demo here and there and it’d be ace enough if the noise rock guitar slapping didn’t amp things up towards greater interest. The balance between performative post-punk that geeks along using mid-paced hardcore progressions, almost like a desperate late 80’s Mystic Records band trying to go rock but could only manage Flux of Pink Indians on quaaludes.

This all builds up to the massive nihilistic centerfold that is the four unholy minutes of “All Your Dead” to close the album. Here we’re treated to every inch of territory covered in one massive psychotic break that clangs along with a tentative step and a spitting shout. The way this final track rolls off the wretched back of the “Code Blue” by way of Venom swagger of “Ninth Circle” is nothing short of genius as an already dark hardcore tape goes a bit corpse-fucker at the end. I mean “Corpse in Motion” already had me there but the last two songs make it real. They’ve got a good handle on modern hardcore punk sounds that aren’t blandly retro, the post-punk and noise rock guitar works so well for that style a la early Laughing Hyenas, and the full listen is just fucked up enough to warrant some repeated spins. Highly recommended to pick this up and follow a promising project like this as it develops, if you’re into weird-ass hardcore punk. 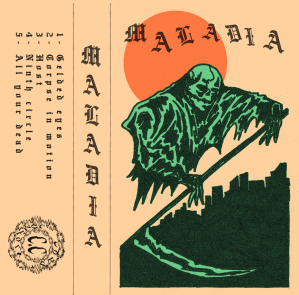