Finnish hyper blues-breakers Kaleidobolt set out to write on the edge of unholy momentum, straddling the verge of collapse in the hopes of creating compelling propulsion with their already unique heavy psychedelic stoner rock elasticity. On this their third full-length the Helsinki based trio have made a point of cranking the tempo and doubling the psychedelic ooze of their shtick in order to reach their heady goals at a steeper trajectory. ‘Bitter’ is the finest effort from the Finns to date thanks to the extra battery packs they’ve strapped on in composing its deeply intricate-yet-springily layered sound. The boogie is thigh-deep, their guitars are burning up at the neck, but is this going to be the album to get you into the electric hellfire club that is modern heavy blues/stoner rock? That’ll be up to you and whatever Satan you worship as there is a lot to unpack and not always a lot to ‘feel’ in the midst of this performative blast of high-functioning, generationally transcendent heavy rock.

There are plenty of modern analogues and ancient inspirations that’d underpin the fast-jogging blues-rock crescendo driven style of Kaleidobolt today but, they’d more or less come into view in 2014 in a slightly more sluggish state and cranking out proggy fuzz-rock jams that’d psyche the average desert rock and early 70’s heavy psych fan equally. The spirit of free-wheeling intensity a la JIRM, early Truckfighters, and Dozer were in there somewhere but a lot of Kaleidobolt‘s sound and movement come from an almost Nebula or Sir Lord Baltimore kind of cranked-and-bluesy late 70’s UK prog-psych arena. They’re a bit harder than that, though, with pre-‘Burn’ Deep Purple jams and post-Kyuss swagger providing a signature squeal long before Kaleidobolt knew exactly what to do with it. That’d be my first point of recommendation for ‘Bitter’, that these guys have figured out exactly what to do with their sound in creating twisted, growling, high-speed heavy psych tracks with it.

If there was an ‘Overkill’ paced version of a group like Admiral Sir Cloudesley Shovell it’d most certainly sound like this. That wallop of blues-driven and effects-soaked sprinting collapse makes up the bulk of what Kaleidobolt does on this third album as the core rhythms of their sound haven’t developed drastically beyond ‘The Zenith Cracks’ (2016), they’ve been sped up polished hard. Think of ‘Bitter’ as the heavy fuzz of Sir Lord Baltimore‘s ‘Kingdom Come’ played at 1.5 times speed and infused with some of the more directional rhythm guitar work from All Them Witches earlier era and you’ve maybe got a vague idea of what it’d sound like; Bear with me here as the sound is hard enough to equate with a lot of modern stoner rock as it is nowhere near as sleepily performed as any worthy peer. Because of the majority of ‘Bitter’ featuring bolt-like intensity it is the more restful and atmospheric moments in between that are (initially) the most interesting, this is a minor issue for the full listen as only a handful of these moments are particularly memorable or vastly different than the previous album. Sheer energetics does end up saving the day as the fiery performances are intriguing enough to draw the listener back in for closer examination that’ll reveal moderately progressive rock structures and a fair minimum of cliches.

There’ll be two camps coming out of ‘Bitter’ for the first time. The first’ll be so satisfied by the fast-jogging, boogie rocking, electric psychedelic meteor shower of the first four tracks that they’ll be sold before Side B even hits. The second might appreciate the loud and flashy wailing and variable pace of the record but won’t be anywhere near solid with the full listen until the duo of “Coyote” and (most importantly) “Hydra” hit. For my own taste I think I kind went through both phases over time but initially I think it was the mid-point break in “Big Sky Land” that had me slow motion falling out of my chair due to the intense body high created. There exists a spirited understanding of 1970’s “all in” hard rock mentality that is doubled in its intensity by the glistening chorales of psychedelic effects and shimmering guitar tones that bulk up the anxious flitting that Kaleidobolt characterize themselves with on ‘Bitter’. That awestruck blindness would last for countless listens before I’d had a more patient moment with “Hydra” and from that point on I’d become torn between the successes of that extended track and the more rollicking nihilistic blues of the remainder of the record.

I’d nonetheless stick to my original assessment that for all of the shocking energy and spiraling progressive stoner rock punches not yet pulled ‘Bitter’ is the finest effort from Kaleidobolt thus far. The potential appeal within is vast as fans of stoner metal, stoner rock, psychedelic rock, progressive rock, and even more adventurous doom metal fellows will find much to like. ‘Bitter’ is an easy recommendation but a moderate one simply because the loud spectacle of the music doesn’t always allow a lot of the more subtle successes to ring through without some focus. For preview the big singles are right there up front with “Big Sky Land” and the doomed “I Am the Seer” ready to go off but for my own taste it was “Deadpan Blues” and “Hydra” that I really felt no matter how many times I spun ‘Bitter’. 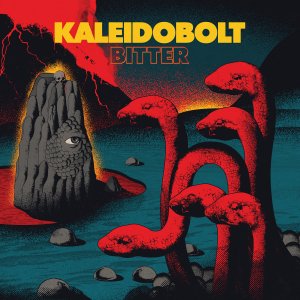