Much of the most compelling underground death metal filth to come from the United States in the last two decades has been driven by self-directed musicians who are often non-collaborative in studio for the sake of their own vision. This isolated sort of musician becomes a jack of all trades and often master of none as limited communication skills often lead to truly bent works without any of the checks and balances a creative bureaucracy brings. There are very few who break through in this way that contribute something of actual vibrancy or depth, especially in the field of rotten mush-spewing brutal death metal. Lectern are a fine example of the way out of that sort of creative rut through intense focus, once they’d move beyond recreating their earliest pieces, that’d expand into a more collaborative situation. The Wakedead Gathering is perhaps the most impressive opposing argument as multi-instrumentalist Andrew Lampe has developed his own unique unhindered beast through sheer determination and focus. There is surely another side to this and it typically comes with the bloated, anything goes rectum of Bandcamp as musicians find their ideal personal home studio setup and iterate like madmen. Jared Moran aka SLK aka K.J. aka Jjarnd Msdiun aka ShaolinLambKiller (54R, Ange de la Mort, Bloodsick, Corpse Arise, Dragón Blanco, Draug, Eats Aids, Er Murazor, Flittering, Forestfather, Hollowed Idols, Ishimura, Kamikaze Pilots, Maggot Crown, Morgue Walker, Mountain of Beard, Myrkridia, Occulsed, Oshiego, Putrefying Cadaverment, Raum, Shokushu Goukan, Spawning Vats, Subterranean Birthright, The Breaking Wheel, The Plague Doctor, Uzumaki, Vomitwolves, Xvart, Your End, Yzordderrex, Zombie Raiders, Ithaqua, Scowl, ex-Immaculate Molestation, Confined Space, Dragunov, Old Woman with No Teeth, ex-Cosmic Atrophy, ex-Gurthang, ex-Vixenta, ex-Bunker Buster, ex-Driven by Suffering, ex-Recovery Period, ex-S & M Party, ex-Seppuku, ex-The Men Behind the Sun, ex-The Nautilus) is well and clearly the sort of folk who runs with any and all ideas had, often committing them to tape entirely by himself and releasing several projects on his own Speed Ritual Records imprint. Chances are you’ve never heard any of those groups, maybe Cosmic Atrophy if you’re lucky, and I’d say it might be because quantity over quality is too natural an assumption to avoid when faced with such a constant stream of work. So, should you take one of his more promising brutal death metal acts, Filtheater, seriously?

It’ll all boil down to a matter of taste and expectation. For the classic brutal death metal fan who enjoys a rifle-tuned snare hit, chunky discordance, and distortion gargling tonality there is a filthy ruthlessness within ‘Blight of Sempiternal Putrefaction’ that’ll immediately satisfy with pure variation on a theme. Filtheater formed as a full band back in 2010 but it doesn’t appear like the project had really been up to much of anything beyond 2013 after the release of their fourth EP, ‘Crepuscule’. All of their material up to that point had been the same brand of Mortician and Avulsed driven percussive brutality that was intentioned towards classic brutality, filth, those rot-chugging milk-churn snare slapping psycho-blasted beasts that were so stupid you’d laugh at but hey, probably bought the CD off their MySpace page back in 2002. Putrevore is probably one of the more successful examples of this in recent memory but they’d never quite clunk out like Brodequin or dip into the technical nuances of Immolation influenced brutal death. This is more or less a void that Filtheater are beginning to fill though their modus is all savagery and skronking fits that often fails to capitalize upon potential bursts of memorable moments. What is ‘missing’ from their demo-era old school brutal death style is the sort of “change up” dynamic that holds cult bands like Morpheus Descends in high regard today whereas straightforward groups like Torture Krypt or Phlegm fade into the deeper recesses of collector hell with each passing year. As a pretentious old school death metal fan, I love that chunky and thugged-out approach mixed with Incantation-esque (“Swallowed at Dusk”) breaks but with specified orthodoxy comes some lack of interest within the overall variation.

There is a fine line between being beaten-up by a brutal drum performance (Adversarial‘s debut) and being annoyed by it (any Enmity album) and one of the big draws on ‘Blight of Sempiternal Putrefaction’ is that Moran gets it right with an unhinged and messy skin-slapping performance throughout. If you’re not as thrilled by stylized death metal percussion as I am then the oft abrupt and serrated sluice of chugs and discordant scrapes that drive each piece should tingle both old school garage death metal demo fans and 2000’s basement chug heads. No doubt you’ll hear generations of NYDM and what I’d consider Czech or Russian ‘classic’ era brutal death severity across the board and that’ll be the niche that finds Filtheater most redeeming unless the dissonant moments end up carrying the record for your tastes. After a handful of listens I ended up putting this record on the back burner for about a month and came back to it with fresh ears and came to appreciate the creative nuance of the guitar work. ‘Blight of Sempiternal Putrefaction’ does begin to sound somewhat redundant in its second half though the last four tracks are redeemed thanks to the strong finish of “Chalice Made of Bone”.

Trite as it might sound considering all of the glossy death metal options coming out of the woodwork every week year round there is something special about a death metal band that kicks up such a fucked-up, methed-out, roaring spectacle. Filtheater gouge hard and leave a bloody mess as they worm their way in so, I’d say they’re worth giving a chance despite the braindead zombie hulk ‘Blight of Sempiternal Putrefaction’ appears to be. Moderately high recommendation. For preview I’d suggest my own two favorite tracks “Malevolent Transcendence” and “Monologues of Reverance”.. 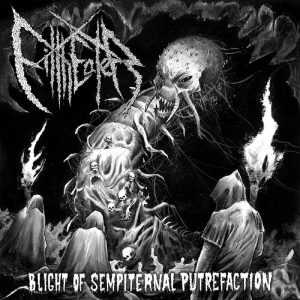