It’d be impossible to imagine the horrors of the scorned dead still spiraling in the minds of a humanity united in defiance of a murderous ‘God’, who’d resorted to the drowning of their world to cleanse the non-believer. Sharing their stories of survival for generations, and forever changed by the sight of the massive rotting death toll surrounding them, they would unite and usurp the heavens themselves. Without question the reasonable and the egregiously vengeful had to unite in שִׁנְעָר to erect the fabled spiral tower that’d reach the lie of heaven and usurp their fickle creator-destroyer, a common goal equally admirable today. The insecure and frightened ‘God’ grew only more wary as his creations would defy him and since childhood the slaves of Christ are taught that this God would divide humanity into pieces, scatter them and erase their shared tongue to spite them. Today we can be sure that this absurd notion of ‘God’ will forever divide and destine doom and pestilence for all as infantile minds believe a great flood, a great boat, and so many other noxious pseudoscientific lies. Québecois melodic black metal’s blasphemic melodic wunderkind Délétère spread pest and violence upon the myth of Babel, with the goal of the tower to free the would-be hero Tervenificus (“the fallen”, essentially) so he might begin the Theovoration, quite literally the consumption of ‘God’. Not only is their treatment of Romanesque portmanteau graceful and bewitchingly writ but so is this grand rawness, their latest EP ‘Theovorator: Babelis Testamentum’.

From the falling limbs of the leprous to the shackled extremities of Lucifer himself the gloriously stretching heights of Délétère‘s rigorous guitar work still define the band in terms of instantaneous appeal. ‘De Horae Leprae’ (2018) was a vibrant work that is not forgotten or unrelated in the wake of ‘Theovorator: Babelis Testamentum’ and some prior observations still apply. The first that I’d stand behind is that their style is closer to Dumal or Austere than nearby compatriots like Forteresse or Csjethe though there is a shared tonality, an emotive ‘dark metal’ strength shared by all related. The mentions of Woods of Desolation and earlier Sorcier des Glaces all could still apply to this sound as well but distantly. Délétère are to my ears still clearly discernible from groups like Véhémence and Aorlhac for their atmospheric (nigh depressive) affect but all the more related as their depressive rock toned compositions become more expressive. As a relatively short (21+ minute) set of three songs it may take about three spins of this EP to immerse and begin to feel the piece beyond its baseline sorrow, which is perhaps leagues more personal than its mythological themes suggest.

“Babel Insanifusor” is nakedly emotive compared to the rest of the EP whereas the first single “Milites Pestilentiae III – Babylonia Magnissima” seems to rejoice afterwards, celebrating some great pain with defiance. “Theovoratoris Aduentus” is menacing by comparison but no less an anthem than the piece that ends the full listen. Délétère would be easy to write off as a solid entry into what has become a signature sound for Québec’s more thoughtful black metal circles but I do believe these compositions are decidedly human and written less as iteration and more with their expressive value highly considered. There are as many ‘easy’ hooks in the guitar work as there are greater arcs that’ll take time to materialize and in this sense ‘Theovorator: Babelis Testamentum’ is a meaningful addition to Délétère‘s discography and not just a space-filler between full-lengths. It remains to be seen if this sort of songwriting is the plateau for the band’s work yet it is unarguably a glorious view here atop the tower they build in defiance of an unjust ‘God’. Moderately high recommendation, as they remain highly memorable and expressive. For preview we’re given “Milites Pestilentiae III – Babylonia Magnissima” as the starting point but, the whole arc of the piece is vital prior to any judgment. 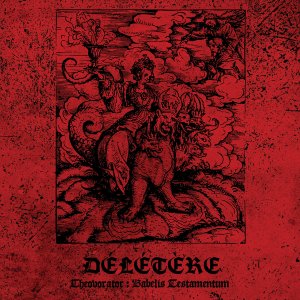