As a small cult of irreligious outsiders in Spain’s Canary Islands the steadfast love for traditional and unrepentant extreme metal spews direct and unending when exploring the many projects associated with Deathwomb‘s membership. Within reach of their goals nearby the true peaks of early Goreaphobia and Immolation influenced death metal on Necroven‘s ‘Primordial Subjugation’ in 2016 it’d seem that the artists involved had sated death’s true calling and their various formations (and collaborations) since have all focused heavily on pre-1993 black metal art. Misas Negros and Culto Profano each balance different death and black metal quotients while Deathwomb, the first to achieve a full-length, aims securely for ancient black metal with fairly obvious influences spread between three familiar pillars of auld bestial furor.

The clearest path to the left comes from the north with the mystic cataclysm of Beherit‘s ‘Drawing Down the Moon’ providing atmospheric aimed dry guitar mystère and keyboard tonality. Further down the spiral, and perhaps most profoundly witnessed in the guitar work, comes the spiked blasts and tangled riffing of Profanatica‘s alter-mentality Havohej with the equally classic ‘Dethrone the Son of God’ conjured in spirit. The trip to Hell is long for the blasphemer and has two stops in Salvador and Belo Horizonte as Mystifier‘s ‘Göetia’ and Sarcófago‘s relentlessly defiant ‘I.N.R.I.’ each have a seat at the altar Deathwomb would sacrifice upon. The important question to ask here is that how does all of that Satanic glory not add up to plaintive war metal or simple Profanatica (or, early Demoncy) worship, most of which is incredibly derivative? As with their work in Necroven the aim is not thoughtlessly cheap worship but adjacency; On ‘Moonless Night Sacraments’ those influences are rough guidelines for Deathwomb‘s sound creating an ancient aura with general compositional shapes that largely become their own interpretation.

For all of those references I don’t think the drum work is on par with Ledney‘s earlier classics, nor do I expect there are a ton of modern black metal listeners who could earnestly remember ‘Drawing Down the Moon’ without some effort. The most immediate references to the casually perusing black metal fan will (maybe) be the more recent hits of Moenen of Xezbeth or perhaps Cemetery Lights thanks to the inclusion of what I’d have to call ‘retro’ keyboards, which are personally more reminiscent of Varathron‘s sparing use early on. None of those points of comparison cue the listener into the sheer attack of the guitar work and its intermittent doom-bringing pace changes. This is where you’ll really need classic references to understand the point of view Deathwomb encroaches with. Otherwise it will feel ominous, aggressive, twisted and occult in its harried and compressed attack just as the transition from first wave to the early second wave was. I was entirely drawn to this album because I am a fan of Beherit in general and I felt there was a hint of demo-era Demoncy in the riffcraft. The guitar work sold me on this album from the first listen and the classic black metal ethos kept me listening once I’d realized how detailed they’d been in creating this otherwise unassuming album.

In recommending an album that is specifically and rooted in iterating upon such a righteous triangulation of early 90’s tradition there is the expectation among many to devalue what has been done when it is done again. That’d be a core divide between the greater swathe of metal fandom that I’ll never fully understand. To aim for an era and feeling is admirable when done respectfully and with taste, not only for the strong material that Deathwomb has conjured but for bringing the conversation back towards old and underappreciated underground classics. The ‘new-next’ thing is often babysitting in this sense until the young grow old and want these vital generational portals backwards in time and forth with the old spirit of extreme metal. Or, I dunno, on a base level it is riff-heavy, slightly cavernous and twistedly rhythmic ‘old school’ black metal record with a little bit of 80’s death metal stink lingering in the air. Highly recommended. For preview I’d recommend “God’s Servant Laceration” right at the heart of the album for a great first impression and then “The Primordial One” for its damned simple-but-effective progression and keyboard heavy reaches. 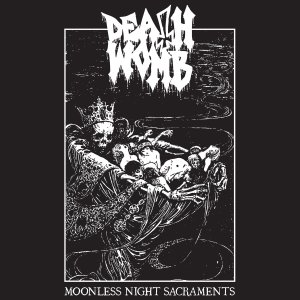