Though today they are considered one of the earliest and most celebrated black metal bands to have come from Fredrikstad, Norway the slow and relatively subtle rise of Kampfar from 1994 ’til today is a story that’d seem to have reached a definitive end in 2017, without a third and final act. Formed by musician Dolk (Per-Joar Spydevold) in 1994 beyond the dissolution of Mock in collaboration with guitarist/bassist Thomas Andreassen, Kampfar would exist as a duo throughout the 90’s quickly releasing two of the finest pagan black metal albums to come from Norway in the very crowded late 90’s. Uniquely melodic, trance-like, and delivered with the spirited subject of Norse mythology in mind Kampfar‘s early work would set a substantial and impressive tone for the project as they would soon push themselves into the live arena beginning in 2003. The additional line-up and live recognition would constitute a second wind for the project that’d peak just as Andreassen would decide to leave the band. A great paradigm shift would arise with ‘Mare’ (2011), a modern and melodic approach to pagan metal that would still resemble melodic black metal but elevate Kampfar towards a very different future than many had imagined for an act formed in the 90’s. Many would feel that core Mark II spirit had repeated itself enough by the time ‘Profan’ (2015) was released and due to issues of health and tragedy a definite end was reached, if only for one year. So, here in 2019 we are graced with what is proposed as a new beginning and third era of Kampfar with the release of ‘Ofidians Manifest’.

There is no doubt that you’ll hear a harsher, bolder return from the band with guitarist Ole Hartvigsen (Emancer, ex-Mistur) exploring the ‘epic’ textures of the bands past while pushing even further into the avant-rock influences that’d peppered themselves into the songwriting since his arrival on ‘Djevelmakt’ (2014). Until the first snarls of Agnete Kjølsrud (Djelv) had turned to chants and speaking in tongues on “Dominans” I wasn’t entirely sure this was such a new experience from Kampfar. The previous three albums were quite bold and offered plenty of depth and experimentation to that new sound but this time around it feels a bit like Rotting Christ‘s serious return on ‘Theogonia’ where the dangerous howls of second wave black metal appear with some earnest place in the mix and the focus turns away from what many would consider dark metal from a paganistic perspective. ‘Profan’ had been a high water mark for the band, a point of breaking as the touring cycle had ended, and the suggestion from Kampfar was that they wouldn’t continue unless they’d topped that achievement. I think it paints ‘Ofidians Manifest’ as a personally endorsed apex that could appear heroic if they’d reached that point. I suppose the question then becomes, have they merely returned back to fighting fit or is this a greater work?

Well, as a fan of the band who’d closely followed their work since ‘Fra underverdenen’ (1999) and saw ‘Djevelmakt’ as a major creative peak, topping ‘Profan’ isn’t such a wild achievement. It was somewhat bloated and very much an iteration rather than a step above. For sure they’ve healed those burns after flying too close to the sun but, I would rather see ‘Ofidians Manifest’ as a new and glorious epoch rather than betterment beyond prior work. The ability to surprise and transcend the expectations of Norwegian (and pagan) black metal is impressive and even moreso when Kampfar work with old and new ideas to make new and interesting noise; Case in point “Eremitt” with its alien folkish black metal build-up towards its surreal Falkenbach-esque melodic mid-point and then descent back towards darkness. It is a deceptively simple event in passing but a wonderfully complex listen in a focused setting and I’d say the same about the majority of the full album. I won’t say that every track is thrilling, in fact “Det Sorte” is a bit boring as an exit, but this is most certainly Kampfar doing their best work as they always have: With one foot outside-the-box.

On a purely subjective point of fandom there is the same joy here that I’d always gotten from listening to Kampfar that first lay in their melodic guitar work (1994-2010) and then later in their modern take on pagan black metal beyond (2011-2015) but I do have some trouble deciding if this is as important of a paradigm shift or simply a more deeply meaningful and ambitious return to form. ‘Ofidians Manifest’ does appear more personal, more vitriolic and driven, a unique but fiercely ‘black metal’ release that does admittedly grow in value with consecutive listens. I’d given myself a week longer than usual to consider the value of Kampfar‘s latest because it seemed to beg for a chance to hurls its snakes within deeper within my mind before passing judgment, and though I don’t consider it a ‘grower’ in terms of listening experience there is a greater arc and depth within that is absolutely not lost in the years since ‘Profan’. It’ll be an easy sell for past fans of the band though I do believe black metal listeners are a bit too quick to forget about what an event ‘Mare’ and ‘Djevelmakt’ both felt like at the time. It isn’t a challenging experience but a sublimely listenable record that all would expect from Kampfar at this point and they’ve provided this above-average quality since inception. Highly recommended. For preview I’d suggest “Ophidian” for a blast of energy, “Dominans” for what is undoubtedly the spectacle of the record, and “Eremitt” for its brief but righteous bend towards Valhalla. 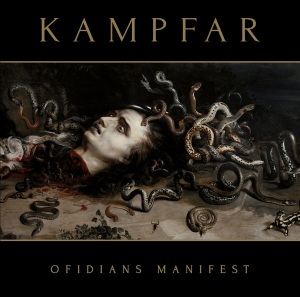