Fired up to start a thrash metal band in the relatively small town of Medicine Hat in Alberta, Canada Warthorn would form in late 1986 and quickly change their name to Disciples of Power by the start of 1987. From there they would release three mind-melting technical thrash metal demos that’d boast an entirely unique style crashing headfirst into Voivod-esque esotericism but with a level of precision already nearing the heights of Coroner and their ilk at the time. They’d proceed to have an incredible four full-length run that is not only unprecedented but severely underappreciated despite various attempts to reissue and reintroduce their catalog. I’d first heard ‘Powertrap’ in 2002 thanks to the internet (probably ClassicThrash.com) and I’ve been an addict since going as far as collecting any/all media I can find as the years go by. I’m sure most of the folks who know my tastes well enough are already sick to death of my rambling about this band but I couldn’t write an anthology of death-to-thrash metal histories without taking a long look at one of the best and unquestionably most original acts to ever transition from a pure thrash metal band towards death metal. Each step is weirder than the last but the progression from thrash metal towards progressive/technical death metal is very clear between 1988-1993. Many of the pieces are missing in terms of information and some of it just isn’t easily found online but I’ve done my best to research as much as I can. Please feel free to message me or leave a comment if I’ve left out anything vital or gotten something horribly wrong! 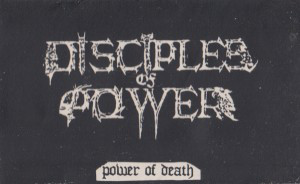 In all my years of scouring the internet and forums for information on the first (‘Cthulu’, 1988) and third (‘Power Trap’, 1989) demos from Disciples of Power I’ve only ever come across real copies of their ‘Power of Death’ demo. All of these songs were essentially featured on their debut full-length ‘Powertrap’ (1989) but these early versions are no less evolved and impressive even in their somewhat nascent form. It’d be their next demo that’d attract attention and signage with Toronto metal label Fringe Product Records who’d already made a name for themselves in introducing Sudden Impact, Sacrifice, Razor, Slaughter, Dissection and Corpus Vile to the greater metal populous. 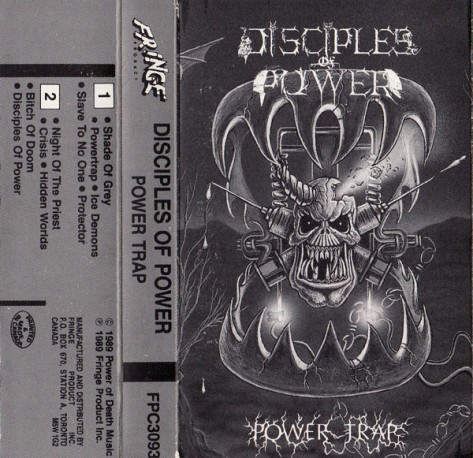 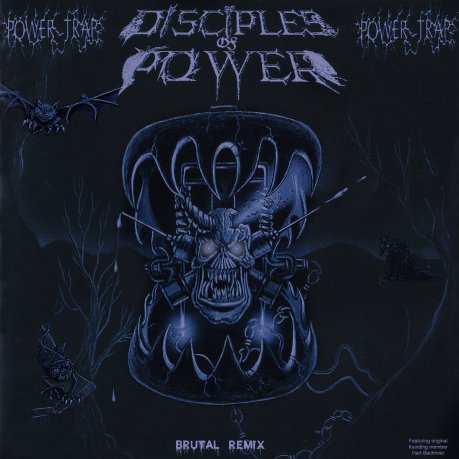 One of the absolute classics of Canadian thrash metal and technical thrash metal in general plus my number two favorite thrash metal (non-death metal) release of all time ‘Powertrap’ has an undeniably abrupt and unique atmosphere that only early Obliveon ever came close to matching. Memorable, twisted, and rhythmically advanced beyond anything Canadian thrash was doing at the time it is a wonder that this band didn’t ignite the world with their sound and style. It skates every avenue between crossover thrash, pure thrash metal, and death/thrash while never venturing far from the genres conventions beyond a wildly technical set of riffs. This would probably be the bands most consistent period of membership as the line-up that’d include founder, guitarist and vocalist Hart Bachmier, guitarist Maurice Williams, Drummer Dean Relf, and Chris Chapman would implode a bit soon after. Williams would eventually leave to join thrashers Process and these internal problems likely contributed to the three year wait for the follow-up ‘Ominous Prophecy’ (1992). Several janky reissues and bootlegs of this album exist but the only one worthy of your attention is the Blood Harvest Records one released last year as it improves the sound without crushing the dynamic range or original feeling of the record. The band have likewise made all of their full-lengths available on Bandcamp! 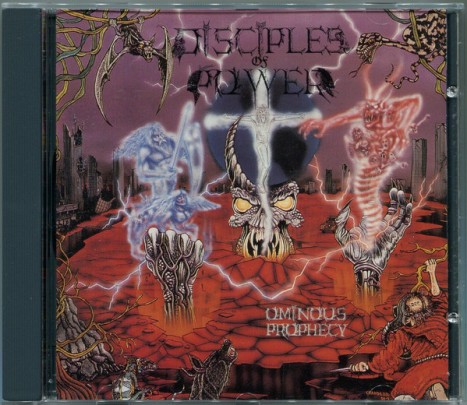 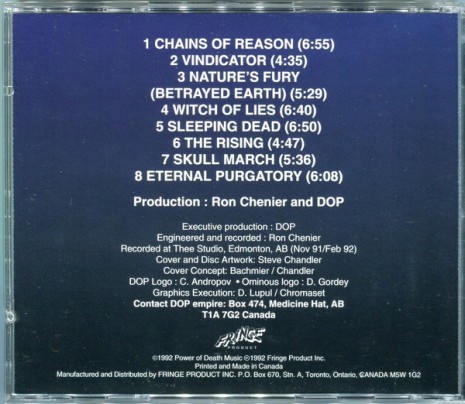 When I tell people this is one of my favorite records of all time without fail I get the most brutal sideways looks and hey, I get it. The production is a bumbling mix of spaciousness and compression. The vocals are somewhere in-between a growl and a guttural whisper. I find these aspects add pure charm to what is one of the most rhythmically unique death metal albums ever recorded. Only Bachmier and Relf remained from the original line-up and they’d brought in guitarist Wes Sontag who arrived with a fiery lead guitar style and incredible technical ability. It sounds like Bachmier had written most of the guitar parts and you’ll hear the ‘real’ Disciples of Power sound on their opus ‘Invincible Enemy’ but I personally never got over how great ‘Ominous Prophecy’ is. I’d love to write a thousand words on this album but I’ll keep it short and suggest “Nature’s Fury” and “Eternal Purgatory” will convince you to give it a real chance to impress. The Vic Records remaster of this album is great, though you’ll have to order it direct from the label in most cases or seek a used copy. As a general rule I wouldn’t recommend buying this type of remaster from Russia, only because I end up with bad bootlegs most often. 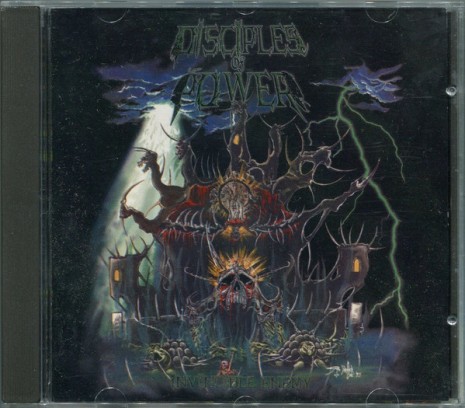 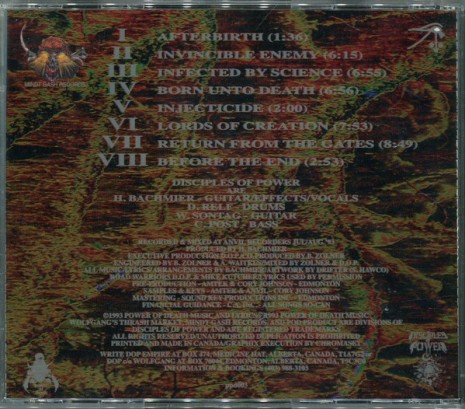 Frustrated with their bullshit contract with Fringe Product Records and seeing their entrance into the death metal realm completely ignored outside of Canada and parts of the United States, Bachmier would form Mindtgash Records and co-produce ‘Invincible Enemy’ not long after the release of ‘Ominous Prophecy’. This is perhaps the best entry point for ‘old school’ death metal fans and especially if you’re a fan of technical death metal old and new. As thrilled as you might be by the rhythms of tech-prog death out of Florida around 1993 chances are you might not realize Canada was already just as much of a goldmine. This album definitely appears written to take full advantage of the dual guitar setup compared to the rhythm driven previous album. You’ll undoubtedly get a sense that the Bachmier/Sontag duo was perhaps more capable than a lot of comparable bands but clearly working with basically no budget. It is a shame because this is perhaps one of the best progressive death/thrash records ever recorded. As odd and randomly strewn together as some of the guitar lines appear at first the record as a whole has a definite earworm quality that’d nearly doubled within this third full-length. Fans of Voivod, death/thrash, prog-death, technical death, and everything in between should be heralding this scraggly death metal record as a classic today.

I’ll be more brief than usual with this entry because I think it is worth focusing solely on those first three full-lengths to begin with. Of course ‘Mechanikill’ (1996) takes the sound and style of ‘Invincible Enemy’ to a truly incredible (drug-addled) height as the band finally gets a solid production job. The band would later split up and reform tentatively for ‘In Dust We Trust’ (2002) and though it is a fine album in it’s preserved form on their Bandcamp I’d likewise suggest trying out the official remaster released on Tribunal/Divebomb Records [Click HERE to listen on Bandcamp!]. You’ll quickly get a sense that the bands songwriting and style wouldn’t drastically evolve beyond ‘Invincible Enemy’ and as it’d modernize the value became slightly lesser. Dean Relf would form Section VIII, a technical/progressive death (core?) band that was just slightly ahead of their time around 1997 and their album ‘Not of Sound Mind’ (2004) should appeal to fans of bands like Neuraxis. Relf would also form the indomitable and underrated Warmarch in 2005 along with members of Weapon and Rites of Thy Degringolade, their album ‘The Declaration’ (2007) would eventually receive wider release but they’ve been long on hold. Sontag would produce all of these projects along with several death and black metal bands in the late 90’s and 2000’s. There were song reunion shows without Bachmier since and later a strange Official Facebook page would pop up… well, you can Google it and search around for info. Point is that this band never got their due and the remasters we’ve gotten are hardly unified or consistent so far outside of Blood Harvest and Vic Records treatment of the earlier catalog. Grab the first three and you should be set!