As the worms penetrate deeper still, the intestines are breached and their milky gas perfumes the atmosphere with a gory slap of true release. Crepitating bowel stew comprised of festering unreleased feces, sprays of ammoniated lactic juice, and quickly boiled anaerobic bacterial fermentation leeches its waft into the already stale air of worm-eaten flesh and great piles of cadaver gorged animal feces. Relish in the bloated piles of bodies mutilated by violence and scoured by the invisible ghouls and opportunistic gore fiends that’d feast under the three suns of Thra, burning in the desolate heat of Phoenix, Arizona. Such is the reality of their sludge/death metal sickness, their ‘Garden of Rot’, a churning mass of putrid gases and slippery infestation bubbling as rancid heaps and oppressive heat they’d call a debut EP. It is a magnificent thing and  a gloriously entrancing rhythmic sluice of heaviness and abominant death.

Formed as a quartet in 2016 and eagerly at work on a demo they’d officially release in 2017 as ‘Mourn’, it was clear that Thra had bright concept and ability enough to begin cracking away at their collective craft with some immediacy. That first demo was a bemusing piece to dissect as it’d express both specific taste in death metal as well as a wide range of sludge metal influences. The most obvious comparisons come from groups such as Dragged From Sunlight (‘Hatred for Mankind’ era), Mantar, and the underrated grinding pulse of Goatsblood but none of these really address the death metal influences nurtured on ‘Garden of Rot’. Taking their tools of the trade towards deeper underground rifts Thra‘s latest can swerve from Graves at Sea (or Thou, even) styled sludge in terms of rhythm but still fit the bill next to the most cavernous works of Corrupted or Desecresy. Is it a death metal record for sludge metal fans, or the other way around? In terms of rhythmic interest I believe there is a solid balance maintained between sub-genre ideals that’re delivered with extremity enough to interest just about anyone who leans one way or the other.

Thra might’ve not reinvented the wheel or spun up something tragically forward-thinking but they’ve smartly opted for a showcase of their strengths. There is great satisfaction to be had within their compositionally weighty throngs of sludge riffs and death metal delivery which provide a truly heavy sense of movement and progression. Though the quartet are pulverizing at face value there is a computer brain within the rotten mound of it all that entertains throughout this fine ~30 minute EP. It is an exceptional first step into official release territory and a great showing of where the band is at right now. Highly recommended. For preview the 10+ minute opener “Smoldering Skies” impresses immediately and “Drawn and Quartered” is where my own death metal centric tastes took me most often. 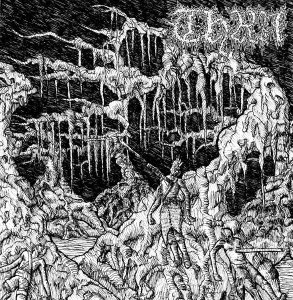