When a loved one changes before you in the space of just a few years, whether their health dissolves to pieces or their dreams are realized in their prime, to see beyond yourself and your own space in the world and to understand (and celebrate) them is perhaps the only meaningful definition of love anyone could universally appreciate. The artist is particularly flawed in this sense as they’re often pits of insatiable doubt, obsessive folks who’re only ever comfortable cloaked in their own thoughts and the worlds they’d create. It is easily forgotten how vital they are when pomp and eccentricities clip their social wings but, to assuage that discomfort and celebrate them can drive a struggling mess towards a masterpiece with great potential to enrich and salvage other lives. To be sure I’m attempting to champion the watchtowers that’d lift and nourish Spirit Adrift‘s founder and primary musician Nate Garrett (Gatecreeper) as he’d pull himself up through his cathartic psychedelic ‘epic’ doom metal one man show towards the celebrated and fiercely earnest heights of ‘Curse of Conception’ in 2017. What a peak it was for so many that year, it’d even landed as number six on my own top fifty releases, as it was graced with references to peak Candlemass, classic thrash and Pallbearer. If you could agree that breakthrough moment was ‘club-sized arena metal’ in 2017 then I’d suggest that ‘Divided by Darkness’ is no less intimate but head-on arena metal in 2019 and that Spirit Adrift adeptly aim for the nosebleed seats with this third full-length.

Performed in full by Garrett and drummer Marcus Bryant ‘Divided by Darkness’ is band-produced with the same engineering and mastering team for ‘Curse of Conception’ in Sanford Parker and Collin Jordan. That is to say that it sounds entirely related to the previous album in terms of glossy guitar tones and warming depth though there are some very key points of growth and change within that stretch beyond the prior established spark of the project. The first and perhaps most ludicrously specific point I noticed was the very late 90’s/early 00’s choice of a baritone tuning, taking that extra step down broadens Spirit Adrift‘s range somewhat but, for some this’ll read quite close to albums like ‘Odd Fellows Rest’ by Crowbar. Any chance I get to be flung back to my teenage years by a modern heavy metal album I’m typically less than eager to be ‘pandered to’ but, the title track strikes the right chord without any such specific intent. ‘Divided by Darkness’ does appear to holistically take a trip further back to the core of what ‘holds up’ best in Garrett‘s own history of heavy music exposure with unmistakable nods to the classics that bridged hard rock and heavy metal, the most obvious being the inspiring Randy Rhoads-era Ozzy Osbourne guitar references on “Angels & Abyss”. I’d drag you through those specific points only for the sake of appreciating that ‘Divided by Darkness’ is not ‘Curse of Conception Part II’ and instead an almost entirely different mood with performances that’ll register as entirely different until you’ve been warmed through by its often jogging and impassioned hard rock pacing.

Fans of guitar harmony the metal world over should study closely what Spirit Adrift comes first and foremost with on ‘Divided by Darkness’ as the major emotive forces of the album aren’t so equally shared between Garrett‘s higher registered, slightly nasal vocal and the soaring dual guitar work that dominates the album. This heavily differentiates the experience from ‘Curse of Conception’ which was a different kind of ‘epic’ doom metal album. The prose he’d deliver, as often harmonized as the lead guitars within, reads as the same philosophe who’d seen his own character rise from strife prior now struggling to stomach the unenlightened world writhing around him in various states of defeat and revision. That same level of cosmic frustration will be familiar but it falls most often from the mouth of a centered place or, from a wailing guitar solo. You might still consider Spirit Adrift a doom metal band for thier affect and heaviness but I’d suggest they’ve done something a bit bigger than a ‘genre’ record for the second time in a row; Garrett deserves some extra credit for a pushing for a sound that continues to be unmistakably Spirit Adrift‘s own as comparisons to Pallbearer and Khemmis make far, far less sense with each release.

Stomping heavy metal numbers (“We Will Not Die”, “Born Into Fire”, “Hear Her”), sweeping modern doom hits (“Tortured by Time”, “Divided by Darkness”), evolved 80’s showmanship and balladry (“Angels & Abyss”, “The Way of Return”) and an almost progressive sludge/rock kick (“Living Light”) express in evenly distributed high-quality across the full length of the listen but reach a clear peak in the transition from Side A to Side B. Though so many bands are content to put their craftsmanship into a guitar sound or a certain level of composition Spirit Adrift appear to consistently consider the entire experience in creation of a record worthy of their own enjoyment. From the track arrangement to the tonal journey from song-to-song and the stunning second piece from artist Joe Petagno on the cover there is sense of ease and professionalism that is outrageously classic in my hands and ears and indicative of some well-considered level of taste. So, does that mean I loved it? No, not at first.

To say that I fell in love with ‘Curse of Conception’ is almost an understatement as it came just at the right time with the right sound and hell, I bought the damn t-shirt. It still moves me and perhaps even more than it did back in 2017 and as such I’d initially felt ‘Divided by Darkness’ was distant, performative, and though it took some consideration and a few casual listens I’d eventually find several songs extremely memorable. It is a more measured and variable set of songs less a pouring of catharsis and more a ‘here’s everything, my absolute best’ and I’d be a dickhead to not realize and accept a piece so driven and confidently bare-naked in its reach. The songwriting growth on display and obsessive passion put into these songs is easy to recognize and worthy of celebration as Garrett‘s goals and abilities lift up Spirit Adrift into something nearly transcendent of underground niche and referential sound. Very high recommendation, it’ll be a grower for some and an immediate sonic hug for others. For preview I’d say they’ve already curated the middle of the album well enough with preview tracks but you have to watch the video for “Angels & Abyss” at the very least, then give the title track a few extra spins as it really stuck with me as their “Planets Collide” moment. 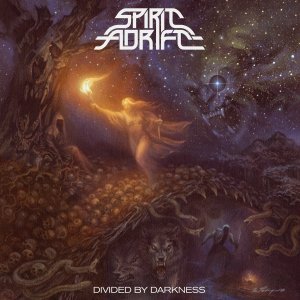