The actual discernible scent of death that triggers instinctive avulsion or a general prey response can be generalized to mixtures of methane, sulfur, and butyric acid but most popular science would first point to the aptly named cadaverine and putrescine for direct effect. Depending on the species and stage of decomposition between four and eight hundred distinctive chemical compounds contribute to the gloriously heady bouquet that your mind would immediately register as dangerous decay. As you might expect a dead pig reeks a bit harder than a human thanks to a bit more fat content along with extensive intestinal surface area but, there is little to differentiate the stench of a dead pig and any sort of human being. The best analogy I could make would be to simply create a festival of about two hundred randomly selected Swedish death metal bands and throw in a few HM-2 obsessed acts from the US and see if you could tell the difference. Whether or not you’re a pig or a man the love of buzzsaw death metal really does begin to beg the choice of all-or-none in terms of what gets a thumbs up or a thumbs down yet for whatever reason I persist in deciding who has riffs and who simply skates by with a cool guitar tone towing the line. For what its worth this internationally sourced collaboration between members of Just Before Dawn and Asphyx is distinctly and righteously Swedish in sound and thankfully on their second album Gods Forsaken have brought us some riffs to keep ‘Smells of Death’ brimming with interest.

Each of the folks involved in Gods Forsaken past-and-present have been involved in at least four very good death metal bands throughout the years. Some came to fill in slots when classic members left, a few are highly active collaborators and creators, and most were previously involved in either underrated Stockholm death metal fixture Blood Mortized or the aforementioned Bolt Thrower-esque project Just Before Dawn. Their bassist was one of the original guitarists from Amon Amarth and vocalist Jonny Pettersson should be incredibly familiar to folks who might’ve happened upon his several self-driven projects (Ashcloud, Nattravnen, Ursinne, Heads for the Dead). Yes, we’re in that weird ultra-prolific space of modern Swedish death metal where they’ve mastered the recording studio so easily that they can’t help but write 7-8 albums a year. Now at this point you’ve either clicked away furiously or you might’ve noticed every band I’ve mentioned is pretty good and very Swedish, that’d be the right way to approach Gods Forsaken in general. Does a buzzy guitar tone really communicate the personae of a nation? No, no, the idea here is that this is a semi-melodic take on the Sunlight Studios-esque sound a la Revolting and maybe a hit of Revel in Flesh for good measure. Well, the idea is that they’ve not gone full-bore ‘The God That Never Was’ (Dismember) but they do kinda venture into ‘As Blood Rains from the Sky… We Walk the Path of Endless Fire‘ (Fleshcrawl) territory here and there. Not sure what I’m talking about? Maybe sit this one out.

Trust that I love when buzzsaw-as-hell Swedish death metal bands go melodic death on some level, especially if they keep the huge tone when they do it. Centinex‘ ‘Reborn in Flames’ is an excellent example of this, even if it does use a flat-chested drum machine, and that tendency for that mashing of style and sound to sound a bit like Necrophobic is pretty alluring for idiots like me. No worries, though as ‘Smells of Death’ is semi-semi-melodic. ‘In a Pitch Black Grave’ (2017) felt way, way too much like a follow-up to Blood Mortized‘s finale ‘The Demon, the Angel, the Disease’ and I just happen to be that asshole who really preferred their self-titled debut in 2009 to whatever came after it. So, more of that third album wasn’t much to look forward to for my taste though it was admittedly a fine album with excellent drumming. Here in 2019 it seems that God Forsaken are creating their own pool of blood for inspiration and the result is a bit more dramatic, serious, and just slightly more ambitious in terms of tone that I can’t help but compare to Revel in Flesh. That is a good thing from my own perspective and it is a pretty strong showing because of that polished and semi-melodic bump in the first half of the album.

Where are the riffs? “They Crawl” is probably the most striking intro at face value but I didn’t really start buying into this album’s jib until “From Inside They Came” hit. From there the next 2-3 songs really are the life of this death metal party where the most brutal and varied ideas express. I wouldn’t say the rest of the album is phoned in but it doesn’t stab me in the eye in the same way as that central core of the full listen does each time. I’m still that kid who bought ‘Clandestine’ back in the early 90’s and loved it so I’ll still eat up whatever buzzsaw and cryptic rot a band like this serves up in the moment. None of the tracks really stood out to such a degree that I’ll be able to remember this album six months down the road without a little effort but Gods Forsaken continue to be a quality and professional sounding band right on the verge of blowing me away, just as Revel in Flesh do with every few records they put out. Moderately high recommendation, as I do find this to be above average. For preview the right place to start is “From Inside They Came” and then over to “The Process of Death” and “Dead and Buried” for the albums hottest spots. 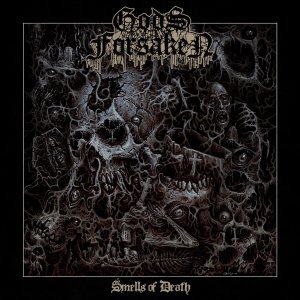