Muffled screams swell beneath temple-slithering strings that’d open and pour out their black ooze stickily upon the stoned soil underfoot. Dark black and bright white suffer in opposition where spiraling howls indicate the aggressor will soon be the victor among ailing yin. “Descent” is static scraped atop the burnt and brine-soaked shingles lapped by the waves of dread and drowning forces of the “Eye of the Quill”. Our introduction is not ominous or hallucinatory but directly growled insidious snarl that’d hide indiscernible from black shadows cast. A full and overflowing nine minute segue into sickness brings whisper and screaming steam-jetting alarm in unison, a distracting din for the over saturated electronic hum-and-burst of Sutekh Hexen. They arrive in distant hallway, within dark temple, floating ever forward as their surrounding pylons warp and shatter out of focus with every flitting frame. By the second segue we’ve been stabbed by poisonous blade, direct in lung and with choking gasp. The ecstasy of all bloods pressure released peters quickly into fear, and torpor, and weakness, then death. The black tongue falls from our dead jaw, splattering upon moss suffocated by tar; Eyes ablaze with chaos flame and fiery distortion relighting our husks corporeal ‘self’ into vengeful minion. The first half of our accompaniment then grows uncontrollable, a worrying beast of rage and venomous spew.

What began as a brutally raw combination of black metal and harsh noise one decade ago would pair Bay Area graphic artist and experimental musician Kevin Gan Yuen (Ogham) with original Cattle Decapitation guitarist Scott Miller (ex-Pro-Death, ex-Al Qaeda) who’d develop their inspired sound into a unique form of droning, blackened dark ambient music through a series of short tapes and EPs from 2009 until 2012. That original Mark I formation of the band would more or less have their peak and breakthrough as a duo with ‘Luciform’ (2011) where they’d found a strong but clearly homespun medium between scathing lo-fi noise and blackened guitar technique. They’d quickly top that piece with ‘Larvæ’ (2012) EP though it wouldn’t be long before Miller left and that second spot would be filled by an expanded four-piece performative and writing staff during this Mark II stage of development, which more or less ended around 2014 in terms of recordings. That slowly revolving door would collaborators such as Lee Camfield, Andy Way (A.C.Way, Thoabath), Ryan Jenckes (Lycus, Sixes), and Joshua Churchill who would appear together and apart in various configurations as Yuen would direct the approach. ‘Become’ (2012) and ‘Monument of Decay’ (2013) saw the project finding its purpose in a purer but still blackened dark ambient sound as well as honing their skills as drone/noise performers. In an interview in early 2014 Sutekh Hexen had expressed their self-titled debut (and first official) full-length would be ready by Summer of that same year. So, here we sit with its horned majesty five years later and fully numbed by its cumulative darkness.

I’d first seen Yuen‘s name and discovered Sutekh Hexen as a result when I bought Lycus‘ ‘Tempest’, still one of the finest extreme doom metal records of the last two decades, and saw his attribution for guitar/keyboards on the title track. At that time ‘Become’ really defined what I thought Sutekh Hexen ‘should’ sound like simply because it was my induction into their dark artistic-but-obliterative vibe and that came without any real inkling of their raw black metal/noise hybridization prior. ‘Sutekh Hexen’ makes sense as a piece of continuation from that first impression in the sense that the focus is on their own stylized version of blackened ambient noise experimentation. I don’t know exactly when visual artist/musician Demian Johnston (Great Falls, BLSPHM) had officially joined Sutekh Hexen but he’d collaborated with Yuen and Miller back in 2009 on ‘…In Antiquity’ from Johnston‘s Dead Accents label as well as ‘Keep Your Hands’ under the name Demian Johnston & Kevin Yuen in 2011. The deeper I dug the easier it was to see that they’d collaborated or employed each others work a great deal over the years. But that isn’t to say that ‘Sutekh Hexen’ is purely a collaboration with Johnston and in fact many of the tracks within were concieved and demoed as early as 2012 through 2014 and then finalized in 2018 between studios in Berkeley, Oakland, and Seattle. As it is a labor in motion (paused and resumed) across the greater body of resurrected Sutekh Hexen it stinks of old rot, degraded plastics, frustrations and defeat.

If you’d heard Yuen‘s noisome contributions to Abstracter‘s ‘Cinereous Incarnate’ last year or, Sutekh Hexen‘s incredible split with Hissing in 2017 then ‘Sutekh Hexen’ is lucky enough to have such an attentive niche-borer to witness this very limited and special Mark III moment that’d culminate and crush flat their prior history. Dark ambient, harsh noise, and even the hilariously chipper permutations of dungeon synth have had their rightful integrations into black metal from the very start of the second wave and if you’d consider the overly ambitious avant-mistakes of Quorthon or Tom Warrior in that same bucket there is quite a lineage to bear. As with the members of Sutekh Hexen themselves I was introduced to darker experimental and ambient music through those freakish side-projects of the early 90’s. The grotesque commune of Equimanthorn‘s ‘Nindinugga Nimshimshargal Enlillara’ and the truly original mastery of Abruptum‘s ‘In Umbra Malitiae Ambulabo, in Aeternum in Triumpho Tenebraum’ that same year remain huge informants for my own taste in dark experimental music yet there would be few rivals for these creations until modern computers put those tools in the right hands. Today Gnaw Their Tongues, Utarm, and I suppose even K.F.R. push the limits of what is harsh, dark and black metal. I’d say ‘All the Dread Magnificence of Perversity‘ from Gnaw Their Tongues is the closest kin to ‘Sutekh Hexen’ I could manage without following the darker noise scene closer than I could probably manage, though you’d still have to chop that one great piece into several vignettes of blackened horror to come close.

Without further dulling your mind with more loose prose to describe its otherwordly merits I’d just as well suggest the greatest strength of ‘Sutekh Hexen’ lies in the, again, cumulative nature of its whole. The first half is a symphony of dread, an ominous soundtrack to depraved sacrifice and brutal cruelty. The second half begins to progressively work in deeper threads of black metal influenced guitar work (see: “E Siel Enna Lehcim”, “Torrential”) and there lies the value for the open-minded black metal fandom seeking something heavy beyond sonic dread and horrifying manipulated field recordings. Those tracks will also appease folks who wanted something closely related to “Pareidolian” from the split with Hissing. I appreciated each of the three ‘Segue’ moments because it brings a point of calm that signals three complete acts for the piece. I could see how this would work as a performance and it does hold up nicely as a calm, focused listen. Does that mean it will win you over if you don’t have any real drive to appreciate dark ambient music, soundscapes, and disturbing experimental electronic music? Well, if Gnaw Their Tongues can be considered that sort of gateway then yes, I’d say this is accessible enough and makes a striking first impression.

As for lasting power within a collection, I think the typical record collector will be more excited for the incredible artistry that accompanies each of Yuen‘s (and Johnston‘s for that matter) works in terms of graphic design and illustration. That isn’t a slight against the music at all but, rather an acknowledgement that ‘blackened noise’ is a very specific niche that will take a lot of bold swings to convince the overstuffed traditional music fan to imbibe for more than one afternoon. I loved it and almost purely because it sparked a period of mental immobility for at least an hour before it began to spark my imagination in all directions. I wouldn’t say it is background music for lucid thought but purely dark music that creates a world one can fall into and wrap themselves in its heavily detailed experience. I am highly recommending this true ‘debut’ from Sutekh Hexen because it is a great possibility that your experiences with atmospheric black metal, esoteric extreme music, and extreme doom metal could gift ‘Sutekh Hexen’ as a worthy gateway towards the world of experimental dark ambiance and grimy sonic excesses. For preview I’d first recommend my two favorite tracks simply because I’d found myself leaving them on repeat for long periods of time: The meditative wash of closer “Pangea Ultima” and the black-martial roar of “Eye of the Quill”. 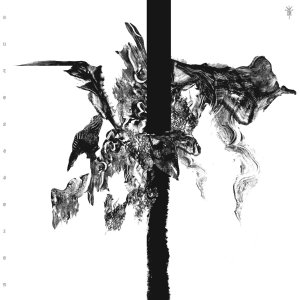