Inspired by the eruptions the world over that ‘Hell Awaits’ would cause Tormentor formed in 1985 as a group of young Porto Alegre, Brazilian fellows aiming for raw and aggressive thrash metal sounds. They would change their name to Massacre by 1987 and then Panic just before releasing their debut album that same year. From there the history of Panic becomes a little bit fuzzy in terms of who was in the band when, at one point in 1988 they’d broken up and formed a progressive band supposedly named Laurifer. Despite a very small amount of information surrounding their early years before reforming and signing to Cogumelo Records for a second full-length, it becomes very important to insert this band into any conversation surrounding the earliest attempts at extreme thrash and death/thrash in the greater South American metal scenes of the mid-to-late 80’s. Why I chose to write about Panic will become immediately apparent when you fire up their debut full-length but the stylistic changes beyond are equally interesting.

Though they’d formed in 1985 and went through a couple of name changes afterwards it was clear from the start what Panic were aiming for in creation of their debut ‘Rotten Church’. This is exactly the sort of brutal and raw thrash that ‘Hell Awaits’ and ‘Seven Churches’ would inspire the world over. One part Slaughter (Canada) a hint of Kreator‘s debut, and plenty of Possessed to go around ‘Rotten Church’ is an appropriately raw and hellish thrasher that is shockingly brutal considering the era it came from. I was attracted to this album initially because it finds a sort of safe place in between Hallow’s Eve at their heaviest and Pentagram (Chile) at their most thrashing mad, the result was long lumped in with compatriots like Holocausto but I’d more comfortably fit a record like this next to ‘Morbid Visions’ from Sepultura. Discovering this record on the internet a little under twenty years after it’d been released as I dug through Brazilian death metal history was inspiring as it egged on my trip as a truly hidden gem. Reissues, bootleg or otherwise, often feature the ‘Seeds of Hate’ demo, which I would normally place before ‘Rotten Church’ but there is some disagreement about which came first, as dumb as that might sound. I love this album, it is an incredible compliment to records like ‘Schizophrenia’, ‘Seven Churches’, Pentagram‘s demos, and should be a very exciting part of any collectors Brazilian death/thrash haul.

I’m almost entirely sure that ‘Seeds of Hate’ came before ‘Rotten Church’ seeing as how it is a demo that contains the first three tracks of that album and in a more raw form. Many people disagree with me on this, so I figure I’ll just leave it how folks seem to want it. I prefer this version of “God’s Death” though they are not wildly different. Panic would disband the next year and remain inactive until 1990 when vocalist Regener Fortes would align with a new set of folks and take things in an (initially) more classic thrash direction.

Gladiator, Distraught, Panic, Leviaethan, M-19, Alchemist, Morbid, Sarcástica, War Dogs, and Reversed Cross all contributed demo tracks for this Thrash Attack Festival compilation and I guarantee you won’t hardly recognize Panic here. Their style was more classic thrash oriented when they returned, and didn’t appear to be touching the raw death metal of their early days. Before you get excited about any of these bands listed keep in mind many of them are Brazilian bands so if Alchemist, Morbid and Gladiator excited you, they’re demo-only Brazilian thrashers with those same names and most suck hard. Leviaethan contribute a track off of their debut ‘Smile!’ and they’re probably the only band here worth following outside of Panic. 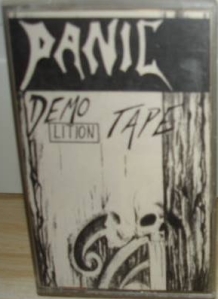 At this point Panic added guitarist Jean Mejolaro and released a more brutal demo tape that I believe got them signed to Cogumelo Records at the time. It is a full 24 minute demo and it is clear they were aiming for something more technical and tightly wound than anything previous, somewhere between ‘Beneath the Remains’, Bay Area thrash, and something hardcore punk slapped like Dorsal Atlântica. Compare this version of “Time to Die” to the one on the Thrash Attack Festival compilation and it should be clear they were conscious of the need for something more death metal oriented to get signed. 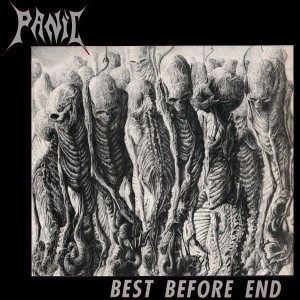 Though it will seem somewhat strange that I end up favoring ‘Best Before End’ over the raw, cult death/thrash blasphemy of ‘Rotten Church’, I find the combination of semi-technical thrash sound and death metal vocals particularly satisfying. Much of the ‘Demo-Lition Tape’ demo is represented here in somewhat tighter form and with a fairly different line-up. Panic, along with a handful of other Brazilian thrash bands had reached a sort of technical peak that goes completely ignored by even the most die-hard classic thrash fans due to groove metal more-or-less taking over the South American popular metal mindset by 1992. Trust that there are a several dozen technical/progressive thrash records from 1989-1993 that continue to be overlooked. ‘Best Before End’ is special for its uniquely non-scene rhythms for their time and place, a refined and not so primal approach defied expectations for a death/thrash band who’d made their name as a raw, ripping hell-fest to begin with.

Panic would again shift their line-up and take about three years to record the follow-up, ‘Boiling Point’ (1996), a cheesy (non-tribal, at least) groove metal album a la Overdose that isn’t worth getting into as it has no real perspective outside of bland trendiness. As much as I’d have liked to really dig through Panic‘s history and find more compelling things to say about their discography, they are a cult-assed band that never took serious ownership over their past until much later. Because the line-up has changed dramatically with almost every single release there isn’t a legacy there in the same way as other bands. They were just a heavy thrash band that pushed towards a solid death/thrash style, that’s it. I generally feel like ‘Rotten Church’ is their truly inspired underground metal record and ‘Best Before End’ ended up being interesting almost by accident, both are excellent brutally dark thrash records worth hearing.