Here I present a ten album sampler of some of the best immersive, atmospheric, instrumental, groovy non-metal muzak from early 2019. Consider it a look at what a trip, a trip could be a trip, it could be a trip to look at what a trip, a trip could be considerable. 01101011010001010010. Most of these albums made it here to Ten From the Tomb because I couldn’t manage the time for a long-form review or because I really didn’t have more than a paragraph or two worth of insight beyond banal description. If you’re not into the selection this week, relax! This’ll be back every 7 days with 10 more albums from different styles, genres, themes, etc.

Hey! Don’t dive in thinking this will all be shit just because I am not doing full reviews for these releases! I always have some quality control in mind and looked for expressive, meaningful or just damn heavy releases that hold value without gimmickry or bland plagiarism. This weeks picks come from  PATREON patrons who vote on a poll every two weeks and decide on the subject of this feature. Next week it’ll be some overlooked March releases. Thank you! I am eternally grateful for the support of readers and appreciate the friendly and positive interactions I’ve had with all thus far. Think my opinions are trash and that I suck? Want to totally tell me off, bro? Click away and let’s all live more sensible lives full of meaningful interactions. I’m too old and bored with people to care. 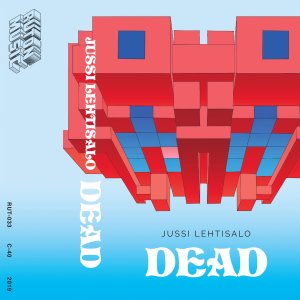 Digital creeps and critters programmed for an easy kill, quarter sucking demons of unfair patternation cued by primitive electronic beats, they all stew within dust-caked machines under layers of particle board, yellowed plastic and long burnt CRTs. ‘Dead’ isn’t just another solo album from Ektro Records/Circle honcho Jussi Lehtisalo because well, everything he does is almost distinctly nothing he’s done before (or at least lately). We have what I’d consider a sinister 16-bit era soundtrack to an arcade machine that electrocutes kids until they catch fire and shit themselves to death at once. “Jam (Part One” has such a beat, I kept coming back to its trailing hits and anti-synthwave style. “Drums” is brilliant too, it reminds me of old MIDI tracks I’d make in the mid-90’s but never really finish… No, really that is a compliment there is something freakishly cool about the ‘big but minimal’ electro feeling of the full listen here that I really appreciate. If you like this sound but want something more catchy, Lehtisalo has also graced us with singles from Lazer Angel, Dekathalon recently, check those out too; If you want something more danceable and experimental grab Spektator. Long live the SWOFHM. 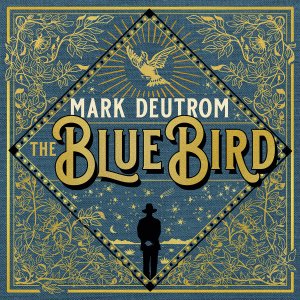 If you’re not familiar with Mark Deutrom you might’ve skipped out on the Melvins‘ discography after ‘Houdini’, basically their era for becoming a ‘big fuckin’ deal’, as he was the bassist beyond that album up to and including ‘Electroretard’. I know the name in hindsight because he’d produced the first Neurosis record as well as big ones from Sacrilege B.C. and Raw Power in the second half of the 80’s. He’d also been in the fairly underrated crossover group Clown Alley, whom I’d recommend if you’re a fan of stuff like Attitude Adjustment. Alright, so what is ‘The Blue Bird’ all about? Ah, it’s a jazzy doom-rock record with a little bit of a weird strut that comes around just often enough to break up the otherwise heavily atmospheric euphoria the record creates. It is unquestionably the sort of record you’d year playing in a record store after everyone comes back from getting high in their car at lunch. Every track is meticulously designed and differs meaningfully from the others, each song brings a new and interesting sound without feeling slapdash or improvised. The genius of the work is that he’s managed to maintain an effortless chill throughout the listen even within the most cranked and staggering moments. 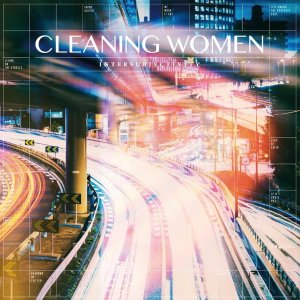 Context is so irrelevant if you’re just feeling a song or two and ‘getting off’ to whatever industrial-tinged pop rock you’ve stumbled upon but after you’re done wiggling around your tiny, shitty apartment to the beat of ‘Intersubjectivity’ there is some compelling context in hand. Literally in hand are a host of impressive custom homemade instruments, specifically fashioned using old and new housekeeping implements. Sounds like a dumb gimmick? Well, its worth looking up what those instruments are and how they’re used but I’d say this Helsinki, Finland make a compelling enough case to pay closer attention. The effect these ramshackle instruments have on the sound of ‘Intersubjectivity’ feels decidedly retro, somewhere between new wave and early industrial pop experimentation. I’m no expert in any case so, I suppose I am recommending it out of completely ignorant enjoyment. If anything I’d have liked it to be much weirder than it seemed initially.

Inspired by surrealist painter Conner O’Leary and created as a tape to accompany a book by the same name in 2018, ‘End Times in Babylon’ is a solo record of kraut/kosmiche music artist Michael C. Sharp (Sungod). The main reference I’d use here is probably Klaus Schulze but still far beyond the 70’s, the only record I personally own that’d be a reasonable reference (and still have this much guitar work in it) is probably ‘I Advanced Masked’ from Andy Summers and Robert Fripp. Great background music, and again it has that ‘stoned at the record store’ appropriate vibe.

Ron Anderson (The Molecules) revives his power-trio formatted avant-prog/rock project PAK with new collaborators Steve Blanco (Imperial Triumphant) on bass and Larry Kwartowitz (Cleric) on drums for ‘Bestial’ a nearly full hour of metallic noise-rocked distemper.Though we’re not treated to full on demonic incantations here there is some service to the inner beast with ‘Bestial’ featuring Anderson‘s typically frantic but unobstructed guitar work melding with the darker avant-metal nature of the other two thirds involved. I had a great time with this record, I mean keep in mind two of my favorite records of all time are ‘In My Head’ and ‘You Can’t Pray a Lie’… so the noodling, muscular, and constantly unraveling heft of ‘Bestial’ might require some level of brokenness to vibe with. If you’re not getting it right away, jump to one of the longer tracks; I felt they gelled hardest on “Reflection  Consumer”, “Prophesies Of The Sybil” and my personal favorite “Triskaidekaphobia” which should sell most people on a full listen.

A harsh noise-blasted industrial metal album that rides into the storm of power electronics but never quite touches the void. Hold Me Down comes from a member of industrial black metal act American and takes most clear influence from late 80’s industrial metal acts like Ministry and Godflesh but ramps that sound up with ten times the harsh, bloated scrape and less of the ‘groove’ that each band would run with as the 90’s approached. “Spoils” probably illustrates that comparison best, otherwise “Strapped” is by far the most badass track here and should sell most folks on the whole thing when it pops up.

Belgium based artist Arcane Voidsplitter is best described as ‘funeral drone’ in the sense that it is paced as the most oaken and ancient experimental extreme doom was. Including lofty celestial ambient keyboard work and heavier guitar swells as if divined through the ‘classic’ (most recognizable) peak of drone/doom the era of Earth and Sun o))). It is an appropriately cosmic combination that is difficult to digest if only because of the very extensive length but the unsettling space-ambient feeling is choice; ‘Voice of the Stars’ expresses a bit like a dramatic dark sci-fi ambient sscore. As far as I can tell this lush, cosmic darkness comes from Stijn Van Cauter (Until Death Overtakes Me) who also creates video games (under NULLL Games) and webcomics (Xyth Era). I really appreciate the independent and ambitious nature of his works and probably my favorite thing from him since The Nulll Collective‘s ‘De Monstris’. 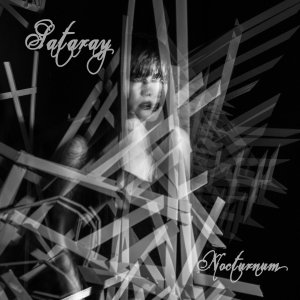 ‘Nocturnum’ comes as the solo debut of Olympia, Washington dark ambient artist Sataray who’d craft wild, intentionally dark soundscapes that appear as if conjured from the underworld and recorded backwards on tape. The artists most prominent medium is her voice that comes in deeply obscured and echoing layers, the ghosted chaos of the album cover really does capture the essence of what ‘Nocturnum’ is as an experience. A dark and eye-blurring experience that trudges back and forth into shadow. Much of the album is that reversed moaning hall of echoes and I found that if I didn’t intentionally set myself in the right state of mind, it’d become quite grating as a barrage of whispers, shaky synth and wailing incantation. I never felt like I fully connected with the piece but when I did achieve immersion it was truly harrowing.

No doubt all of the weirdest, and best, music I receive is from Finland and Aavikko is not so much weird but something entirely different. Mystic dance music, stiff lower-backed synth camp triage throbbed up and out in ’95, and this is their sixth album. The trio features Tomi Leppänen (Circle, Pharaoh Overlord, K-X-P) and has a decidedly different approach, though the retro synth will likely appeal to K-X-P‘s krauty ways. Aavikko is upbeat, a squishy sort of plastic hump music that had me wishing someone would drug me and steal my wallet at 3:00AM in some random eastern European country. Feels a bit like late 90’s Japanese video game music to me, not the right reference but still feels great. “Sleepstorm” is incredible, love the break around two minutes in and how it builds from there. 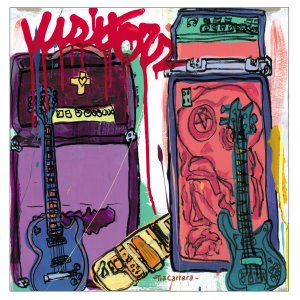 Austin, Texas improvisational psychedelic blues rock trio Tia Carrera have become known for their twist-and-turn filled jams over the last two decades but they’ve not released much of anything officially since ‘Cosmic Priestess’ (2011). ‘Visitors/Early Purple’ breaks that on-wax silence and feels a bit underwhelming at first. I’ve included it on this list because each record I’ve included thus far excels as functional ‘background’ music more than focused listening; Tia Carrera follows suit in some sense by putting out a feeling, a groove, and a performance that more or less works best as a righteous psych rock wail that doesn’t distract because it reaches a peak and coasts there looking for the sweet spot of the jam they’re in. The sort of record I enjoy in the moment but is only memorable for the effect it creates.