The wizard voice echoes through us like thunder calling water down from the sky, an impossible gravity plants our armored feet in our place beneath his magic. The bounding vibrations alone are unkind staccato shoves felt as barrages of punch and swinging air but, we are not dead, only more determined. Mirages of spectral knights and flaming arrows strike fear into all who’d enter without knowing better yet this auld trickery is mild to those carrying. One hit to see truth, two for poise under fear, and for the fearless seven to link the corners of the seal and dispel the enfeebled mages illusory power. Euphoria only slows us, torpor of the mind bending trees into knots as, I the mendicant and the seer peer through cruel blindness at the enchanted skeleton pile whirling scepter alight. Untouched, awhirl with sorcery in mid-air atop the point where two chasm meet the magic’d persist. With each cough the veil lift and re-drape, one hit to see truth, two… and we arrive upon red-swarmed bone and dried glistening meat setting in the hand of the goat-horned man upon sulfuric throne. Frozen by fear and spell alike we wither under transfixing gaze for seven nights, hallucinating the reign of our unholiest king risen from underworld unto armageddon. There we die as enchanted bone and cursed weapon, new and greater-singing lure for his army. This cursed doom, comes with one consolation too sweet to have imagined: The dark one crusades with eardrum rupturing dirge and marching munitions arranged by he the wizard, the Witchfinder, conjuring seven angel-exploding anti-hymnals, his ‘Hazy Rites’, to buff and soldier cursed bone warriors into undying demigods.

Don the mystic plant or immerse the incurable imagination as these seven living rituals erupt across the unknowing underground where Satanic wretch steals and enriches heathen souls into lumbering doom over the world. The crumbled, crushed pious lie in one great sea of blood and moaning lung-dripping from frail chests torn, juiced and eaten; Two revolutions of the sun pass so violently the cosmic heat of time dissolves our curse, our universe to rest. What echoes through the fabric of now-sated void, the traditional doom rite for one last 58 minute spin, is a second Witchfinder dirge composed to celebrate humanity’s most Dionysian demise. What beauty Clermont-Ferrand, France holds above ground is today a jeweled crust atop a brutally stoned and sludged underground behemoth, conjured beneath grand cathedrals by a trio of musicians finding new seeds of life and death beyond ‘Dopethrone’ and Slomatics as so many have before them. Their thunder is refreshingly conscious and proud of its influence that’d bulge with Bongzilla‘d ultra-tone, scathe with the nuclear crisp of Monolord and incant the dead marsh howls of early Windhand. Typical as the sound would seem at first, ‘Hazy Rites’ does not suffer from its sound being a known quantity instead it arrives with familiarity and mystifies with its satisfying doomed pace and hallucinogenic depth.

The right mindset is critical for consumption and if you’d not figured that an intense, medical-grade altered state might be required cue the mind into focus and freedom necessary to discern the nuanced progression here, it may express as a mild warping of the rote. Slow and blustering, creaking and thumping along as if thousand year old tree monoliths were falling by the will of chanting demonic druids the will of ‘Hazy Rites’ melts differently than Witchfinder‘s predecessor, a host of slow and bare pyschedelic sludge/doom renderings; Today we find the band writing concise songs alongside a handful of their ritualistic dirges, a bit like Green Druid in that sense but with a different Conan-esque production thanks to Haldor Grunberg of Satanic Audio (Dopelord, Spaceslug, Totenmesse) and a heavier emphasis on the riff. A beautiful rendering of a very simple form of stoner doom, the effect is meant to be intimate and the themes are entirely human but, pushed along by an otherworldly sound. I’d say from “Sexual Intercourse” and beyond the vocals in a particular increase in presence and ambition that the first three songs only dabble in.

You won’t likely hit the heart of this hour-long modern doom album for roughly half of that first spin though, I’d suggest the first half is equally effective for its heaviness. Not all of the trailing vocal performances work, “Dans l’instant” loses its way at the mid-point, but as a full listening experience I appreciated that what defined my introduction to ‘Hazy Rites’ would evolve before Witchfinder were finished casting their spell. Not a perfect album and also not as rote as it’d seem, I can give moderately high recommendation of this French bands second album both for its fantastic overblown stoner-doom sound as well as what they do with it. Moderately high recommendation. For preview I’d recommend “Satan’s Haze” for the sledging stoned-ass doom utopia of it all and then “Wild Trippin'” for a glimpse of the flipside and how Witchfinder capably shift gears throughout. 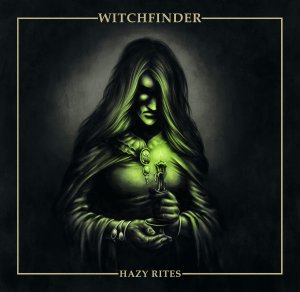