Scandinavia is so righteously dotted with distinct extreme metal sounds, infamous scenes, stylistic movements, and flamboyant historical figures that slightly less ‘old ways’ begin to age poorly as the referential nature of modern black metal picks clean untended corpses with revisionist likening. Nordjevel initially appeared as a sort of recreation sect intent upon the late 90’s and early 2000’s ultra-militance popularized by the cold brutality of groups such as Marduk, Zyklon, and Dark Funeral. There are of course a thousand more names to toss in the pot as ‘norsecore’ became a catch-all phrase meant to insult the less than original overpopulation of brutal Nordic black metal acts. The original idea posited by the duo of Doedsadmiral (Svartelder, Doedsvangr) and Nord (Fatal Impact, Tvangeste, Varde) was distinctly Norwegian and dryly brutal enough to be placed solidly within that vein by default, as they were joined by ex-members of Marduk and Ragnarok. Many people see such a form of accessible, clean and hard hitting black metal as typical or ‘standard’ Norwegian black metal fare but this is a fallacy engineered by the most surface level appreciation of that nations output. High fidelity and a certain standard of technique is not necessarily a curse to be upheld but, all things wither and reshape in situations of such intense darkness; It’d seem that Nordjevel now serves as a vessel for displaced black metal artists who notably excel in that most brutal black metal arena as they piece together an exemplar form with ‘Necrogenesis’.

It makes sense to begin with frankness and suggest that Nordjevel‘s debut full-length, ‘Nordjevel’ (2016), was a bland outing that couldn’t have been a more vanilla showing with consideration for the talent on hand and their otherwise interesting resumes. The follow up EP ‘Krigsmakt’ (2017) pushed things into a direction that felt too much like the Marduk record Frank Widigs had also drummed on prior (‘Frontschwein’). In the time since the band has been restaffed with two artists who are fittingly paired as they also fill out the reformed Odium line-up; The first is Swedish drummer Dominator (The Wretched End) who is best known for his time in Dark Funeral and death metal band Aeon. The second is Destructhor who received an unfair deal in being asked to participate on Morbid Angel‘s greatest embarrassment but the guitarist is an incredible talent between his work in underrated death metal act Myrkskog and his time in Zyklon. You can hear the signatures of both musicians informing the style of ‘Necrogenesis’ and their inclusion is a great blast of noxious engine air for the previously rote Nordjevel.

If you’re well familiar with ‘World ov Worms’, ‘Deathmachine’ and Destructhor‘s body of work with both groups his riffs will be immediately noticeable but since this is a primarily black metal affair references to Dark Funeral (particularly ‘Where Shadows Forever Reign’), 1349, and even a hint of Taake make for an accessible but urgent listen that isn’t afraid of breaking into nuanced or semi-melodic sections. Though it might sound slightly out of character for the established Nordjevel fan there is no doubt a higher level of precision and variety to be found on this second release from the band. As much of a pleasant spectacle and a successfully entertaining guitar album ‘Necrogenesis’ can be there is some of that same tawdry sensibility that I also get from Vltimas‘ debut, which released the same day, though thankfully a great deal less of it. Yes, these are professional and expensive recordings with impressive musicians at the helm but there is a sense of performative density, a thick-skulled brutal mentality, that prevents my warming up to ‘Necrogenesis’ entirely. Of course an album of hate anthems focused on brutality isn’t meant to warm to me and instead I fully see the inherent value in its distanced, otherworldly tones (see: “The Idea of One-ness”).

Is there enough depth in the experience for it to sit on your shelf and repeat a thousand times before you die? Yes and no. I would say between ‘Anthems to the Welkin at Dusk’ and ‘World ov Worms’ you might find this superficially reminiscent of greater depths but, folks who begin to twitch uncontrollably as Marduk slows down might find some great solace in the harried and obliterative experience within. On a physical level I can imagine how entertaining it would be to witness a performance of Nordjevel‘s latest album and I find myself unable to write it off despite the bulk of it feeling overly familiar, there is great sense and power in these guitar arrangements. Thus my recommendation is fairly torn as many listens fail to remedy the clash of cheapness and effective composition. Moderate recommendation. For preview I’d say the angular  Immortal-esque harassment and eventual Taake-ish stomp of “Sunset Glow” is a fine opening moment but, my favorite guitar work came with “Amen Whores” and “Devilery”. 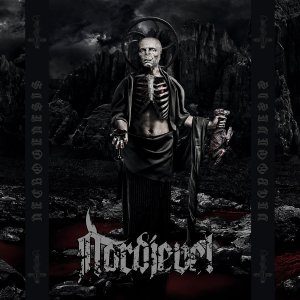