You’d have spoke too soon if you’d thought Trevor William Church had hit his stride in 2017 as doom-lords Beastmaker began to detail further ambitions, releases from Church Recordings intensified, and Haunt came into view. In hindsight he’d only just kicked the gates of inspiration open. Just looking at these first three months of 2019 we’ve already gotten debuts from speedsters Syrinx and classicists Stunner on his label, a throat-kickin’ farewell EP from Beastmaker, plus both a full-length (‘If Icarus Could Fly’) and this EP, ‘Mosaic Vision’ from Haunt. I wouldn’t blame you if you couldn’t keep up, either, as it truly feels like Church and his expanding crew have established an unholy ‘one step ahead’ momentum in focusing on the very well received classic heavy metal/hard rock project Haunt. This EP is so hot on the heels of the full-length, which I’ve planned a review around the physical release date, that it almost pains me to say ‘Mosaic Vision’ is already a ‘step up’ just a week later. Ridiculous as that may seem considering the quality of past releases, the mid-80’s Randy Rhoads-era Ozzy Osbourne shredding and mid-to-late 70’s Thin Lizzy melodies that’ve defined Haunt thus far have never been more refined.

Should you overlook ‘If Icarus Could Fly’? No way, although ‘Mosaic Vision’ is a peek into where Haunt is headed there are no major changes to Church‘s songwriting formula or sound. The one note I’d give for this EP would be that I appears their sound is increasingly focused on slick classic hard rock guitar hero -moments- while balancing that finesse with melodies that are distinctly Haunt. It works as a short experience but the structure begins to feel somewhat repetitive when compared to the arc of the full-length; This won’t matter to most folks as ‘Mosaic Vision’ is immediately evocative of radio rock greats from back when the radio was a thing and in this sense Church and crew have cracked the code that Cauldron, Skull Fist, Night Demon and more recently Pounder have been on the verge of. You can still absolutely lump Haunt in with all of those bands but, the most important thing those bands are missing is the shred-and-wail guitar work of post-’79 hard rock/heavy metal that Church really nails on each of Haunt‘s 2019 releases (so far).

What inspires me to dig into a record beyond surface level spins does admittedly come from that Rhoads-esque riffing and in particular the dual leads from Church and John Tucker (Beastmaker bassist) were valuable in the sense that they kinda inspired me one step beyond most retro metal acts in that songs like “Callouses” and “Triumph” had me exploring a bunch of nostalgic 70’s and 80’s metal records. This has often been my own personal barometer for how resonant a modern throwback heavy metal band truly is; That they can convince me to watch videos of Ozzy‘s early 80’s TV performances while I’m up in the middle of the night is a good sign that they’ve struck an obvious and effective chord in terms of sound and performance. You can make your own decisions surrounding ‘old is new again’ classic rock/metal mentality and whether or not you’re being pandered to but I personally find Haunt a step above their peers when it comes to songwriting, where it counts. For preview I’d actually recommend you not even approach ‘Mosaic Vision’ without the context of ‘If Icarus Could Fly’ if only for continuity. Otherwise, “Triumph” and “Callouses” are to date some of the best lead guitar work from the band and I’d start there. 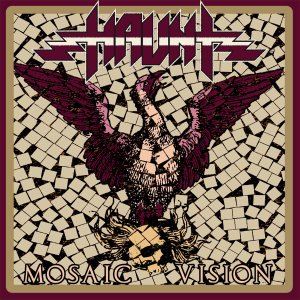