As the first gravitational singularity commissioned by the ever-expanding Roadburn Festival universe for a unique live performance six months in the writing, this union of Finnish psychedelic metal artists Oranssi Pazuzu and Dark Buddha Rising represents not an elevation of mere atmosphere but a union intended of higher-art. Posited as an explosive wastement jam session unhindered by the intentional the collaboration would soon be given clear direction, and composition, by necessity as the material shaped; It’d spray throughout the cosmos on stage for Roadburn ’18 as a resounding success witnessed by thousands. Now set into motion, spinning eternally as disc and wax, ‘Syntheosis’ captures that same dark narrative spectacle portending our Anthropocene end in its most polished, produced and equally exciting form. Herein an extreme sludge opera set in the cosmos, ‘Syntheosis’ melds deeper-still the darkness and the unique spectrum of each entire entity into a nine act, hour long battle between forces beyond the perception of man.

What united many of these artists previous is perhaps a distinctly more Finnish heavy psych influenced sludge endeavor (Atomikylä) holding a more ‘pedestrian’ form of darkness [see: ‘Erkale’ (2014)], that would likewise find its way to Roadburn in 2016. This seems a perfect point of inception in creating a spectacular event that would amount to more than commissioned effects and visual for a Circle-esque space-jamming Oranssi Pazuzu session. With his invite of Atomikylä collaborator Vesa Ajomo (Syvyys, ex-Hexvessel) and the rest of Dark Buddha Rising, Juho Vanhanen (Grave Pleasures, Kuolleet Intiaanit) not only brought in a functional collaborator but also extra tendrils of collaboration, fifteen folks in total, to swerve the proceedings into something truly special for the experimental underground rock and metal festival.

For the recording of the album resultant they’d bring in a full nine performer line-up as well as ‘Värähtelijä’ mixer Julius Mauranen for the recording and production. As a cynical person inhabiting a gloriously flawed Earth my own reservations (having not witnessed the Roadburn performance in person) figured that the compositions would likely lean towards Oranssi Pazuzu‘s extreme metal-meets-space rock sensibilities and the ritualistic bounding of Dark Buddha Rising would take a backseat. Sure enough it would seem that way as ‘Syntheosis’ presents its first few movements but, the record finds countless clever ways to fuse the unique atmospherics, rhythms, and songwriting tics of both collectives into one graceful supergiant as it progresses.

The space-rock leads and Alchemist-esque psychedelic waves Oranssi Pazuzu are legends for bringing to black metal proper were previously brought to Atomikylä by Vanhanen‘s hand though here they meet with Ajomo‘s crew of tightly-snapping rhythmic elasticity rather than wallow in predictable builds and loose atmospheric tension. Psychedelic rock guitars, ritualistic sludge rhythms, and hard-flung atmospheric blackened guitar trills are all the more stunning in the hands of two of the best rhythm sections in the psychedelic metal spectrum and thankfully the compositions holding ‘Syntheosis’ together aren’t self-indulgent in any sense. If anything the ego-death is the glue of this undertaking, the separation from all pre-concieved selves into one great collective has surely enlightened all involved and Waste of Space Orchestra is more cohesive because of the communal nature of this event. It is however, a sort of space opera in some sense and the three character narrative (four if you count feeble mankind) is the bit of ‘extra’ that ‘Syntheosis’ needed to make sure it’d be interesting as a studio recording.

The context is brilliant, the themes are inspiring, and the two collaborating bands are among my own favorite artists in their own respective genres so there is no question that a certain percentage of people similar to myself will approach Waste of Space Orchestra with open arms and voracious ears. In remaining somewhat objective as possible I could see why a fan of one band might not know the other and won’t be sure which vocalist is active at any given time given that Marko Neuman (Convocation, ex-Candy Cane), Ajomo, and Vanhanen each have quite a range of vocal capabilities between. For the folks who are less familiar with Dark Buddha Rising I’d say the second half of the record hits many of those tribal, ritualistic sludge points that might pique further interest in the last handful of releases from the band. For folks less familiar with Oranssi Pazuzu the first three tracks largely feature rhythms indicative of that bands blackened steps from ‘Kosmonument’ (2011) towards ‘Värähtelijä’ (2016) minus some of the more traditionally ‘black metal’ aspects of their songwriting. The title track and epic 13+ minute closer finds both erupting together in one great sway, a billowing unison that fades masterfully. The opener comes just as easily, so I felt this was a very successful ‘repeatable’ listen that could be looped for hours.

My first thought in analyzing ‘Syntheosis’ for recommendation placed me in a sort of bondage between celebrating the successful conjoining of forces in a dramatic, artistic fashion as they created glorious atmospherics and highlighted the major strengths of each and… dinging the experience for often amounting to mere performative spectacle. Ultimately the abstract nature of the arc is not pure spectacle, in fact there are several tracks that bear repeating in their own right outside of the context of the whole. There is repeatable value here beyond atmosphere and science fiction sludge metal quirks. In comparing the live recordings of the experience the studio production is not only a bit sharper in the obvious sense but the vocal performances are much more clear in their intent. The esoteric vocal characterizations are where I’d say the piece becomes something entirely valuable, and unique, beyond an awesome performance. There is conflict between each The Shaman, a clairvoyant in distress, The Seeker, a dimensional investigator in search of truth, and The Possessor, a source of menace and corruption in the universe; The narrative finds them in conflict but finds them in total convergence in the end, culminating in the sonic equivalency of closing track “Syntheosis”. I might be a bit jaded by a lifetime of bad prog (or power) metal concept albums but this is something akin to a spiritual fable, or creation myth for a new future.

In becoming so swept up in the vacuum of the experience, be it live or this refined version, I found myself unable to find meaningful flaw in the full listen. It brought to mind a couple of experiences that will obviously not work for many listeners: Discovering Neurosis‘ psychedelic live show in the late 90’s/early 2000’s and listening to ‘Kosmonument’ for the first time almost a decade ago. These were vital experiences in shaping my own taste in ‘modern’ music and as I believe ‘Syntheosis’ could be that self-expansion for whole new groups of extreme metal and psych-stoner music fans alike, it deserves some acclaim. Highest recommendation, an essential listen for the year 2019 and beyond. For preview I’d first suggest “Wake Up the Possessor” and “Vacuum Head” as my personal favorite tracks and then the pairing of “Void Monolith” and “The Shamanic Vision” for a proper induction into the experience. 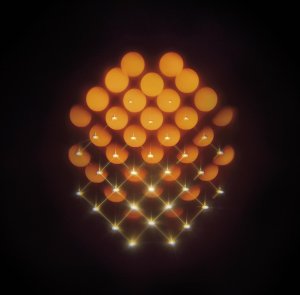