Without the context of reputation, association and cumulative identity how much do you value any new experience? The residue of experimentation as a lifestyle is so often sold as a temporary status, a question of the self and a trek towards finding who or what that might be but any artist with an inch of critical thought attached to their work understands that legacy and a ‘body of work’ is a rotten curse often met with dishonest ‘fan’ reactions when displayed in public spaces. The ‘brand’ created with a name isn’t limited to artistry though, not now that the illusory reality technology creates dominates most methods of creation and unquestionably falls victim to the hive mind that drives all things modern day. Where the artist goes when lost in the loop of modern creativity’s ‘Yes / Next’ machination amidst the nag of the ‘old days’ is ideally anonymity but, the civilian and the outward looking, reflection-void populace can neither erase themselves with anonymity nor redefine themselves in an age of records and inescapable reputation-building algorithm. To willingly commit commercial suicide in the face of the oppressive delusion of the defined ‘self’ is yet a temporary freedom as each movement away from the known unit only adds facet to the jeweled whole. There is no more apt suggestion in response to the dire fate of the oppressed than that of São Paulo, Brazil based experimental trio Deafkids who would fight fire with fire in using our vast interconnected world of mechanized corporate control in reprogramming the ‘self’, and the people, against oppression. This conflict of technology and defiant anarcho-primitivism is as much a puzzle as it is a meditative experience and they’ve called it ‘Metaprogramação’.

Deafkids have a history that makes them all the more human, though, yet I would confidently suggest that without their progression in mind you might still be thrilled to dust by the hypnotic downtempo tribal-industrial punk whirl of their third LP. They began in defiance of capitalism with the molotov flinging bash of ‘6 Heretic Anthems for the Deaf’ EP (2012) and by the time their first (very limited) full-length tape ‘I Am the Sickness’ in August of 2013 came out they hadn’t moved leaps and bounds. It’d be ‘The Upper Hand’ (2013) a few months later that would see poetic application in defiance of societal abuses. Deafkids had hit upon something visceral, an echoing psychotic crust punk and sludge riff monstrosity pressing on through the void of meaning within their caged existence; The atmospheric experimentation and harsh noise within reminded me of early ‘outside the box’ moments from Corrupted as much as it did the experimental d-beat to come out of Brazil in the last three decades as huge doomed, sludge riffs would follow on ‘Over The Days​.​.​. Somewhat Damaged’ EP (2014). This is where I kinda fell for their discography as they’d retained a sense of ‘self’ despite the obscure and experimental nature of their sound, it was deconstructed but not in a meaningless way where the conceptual ideas hadn’t overshadowed the content. Neurot Recordings would smartly grab ahold of the trio for the mind-flaying ‘Configuração do Lamento’ EP (2016) and there the bridge towards ‘Metaprogramação’ was finally constructed using experimental noise, power electronics, industrial punk, and tribal beats to create a collage yet separated by norms. With this latest release Deafkids integrate these experiments into one violent avant-mutant of noisome hypnosis.

Describing a record like ‘Metaprogramação’ in summary should tie any listener into knots as the esoteric collision of forms within occasionally reaches the level of gear-shifting you’d find in modern plunderphonics or turntablism releases. From my own perspective there is a logic here in the LeMarchand box of it all that relates to the doors opened by groups like Ministry, Big Black and Fudge Tunnel in the late 80’s and early 90’s as the more visibly deranged drum machine/industrial rock acts found an approach for the guitar (with regard to electronic music) that occasionally worked. None of this is related to the sound of what Deafkids does (possibly Ministry when the guitars do ramp up) but there is that same feeling of a threshold being crossed that actually works beyond novelty and the perceived sound collage. It is a tough thing to describe in terms of what has been done before without edging into musique concrete or referencing unrelated garbage like Death Spells but, think of it as an intentioned slurry of experimental electronics, downbeat, Latin percussion, and a bit of GNOD (circa ‘Infinity Machines’) if they had any sort of real-ass crust punk upbringing. My own value as a descriptive machine was constantly tested in approaching ‘Metaprogramação’ though its indescribable quality doesn’t suggest it is more profound or valuable without context. It is a valuable a trip that exudes massive flow however, when being entirely objective.

Does dark anarcho punk, noise, and experimental electronics make for good listening when blended and curated with style? It certainly won’t be an easy induction unless you’ve got the context of ‘Configuração do Lamento’, a couple of Ratos de Porão records, a taste for experimental music and the stated intent of the music to deprogram the modern primate man. I personally found value over time and with repetition as the 40 minute length of ‘Metaprogramação’ skims by in seemingly half that time and lends itself very well to continuous listening. It might seem formless, aimless, and minimalist as it develops its place in your mind but with familiarity comes a worthwhile meditation with an inspiring theme. Highly recommended. For preview I’d normally recommend a particular track but the interconnected nature of the experience suggests the need for a ‘block’ of listening, so I’d suggest previewing the first fifteen minutes (the first ~6 tracks or so) and giving it a chance to develop from there. 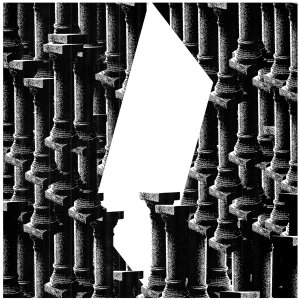