It all started when your muscles felt weaker, you’d been somewhere ancient and tropical with your shoes tied loose and your mind wandering off in the shade, you lost control when that weakness set in. A fever came (and went) for a few weeks and sure, a little numbness here and there, but maybe you slept on that arm too long. Maybe the feeling will come back and that redness under your skin will go away. That lesion isn’t a huge concern yet, it might just be a zit, are you taking showers often enough? You know how stress affects the mind, it’ll make you worry too much about nothing. Get outside, get some sun, you’ll feel great. Lymph nodes swollen? Allergies, probably. That nodule on your arm is festering? You’re losing hair? Hey, aren’t we all, right? You hit your thirties and it all collapses, eh. I don’t think leprosy even exists anymore, friend, you’re OK. I know getting older feels like you’re dying sometimes, buy hey aren’t we all? Aren’t we all slowly dissolving, sagging and squirming under the tick of our clock-rigged telomeres? The sloth of age and the dizziness of changing times strikes the complacent like the most ancient of diseases; The old bastardizations of rock are commonplace all the same and here in the now the disease of modern noise rock, a hundred generations and a thousand dead ‘scenes’ later, produces museum grade pieces. Even the most neglected musicians become capable with persistence and what a -fantastic- find they are at new peaks, if not entirely by chance. This is where I land upon Fine China Superbone, a noise rock trio that’d triangulate themselves between The Hauge, Amsterdam and Amersfoort within the Netherlands for at least two decades now.

How serious did they seem in 2002 when they’d released ‘How Long is a Chinese?’ Well, it was a fine release with an MSPaint scrawl as a cover but the music was some serious worship of the kind of noise rock that’d put labels like Skin Graft Records on the map throughout the 90’s; Essentially a jazz-skronking math rock style before it was a ‘thing’ and a sludged vibe, just short of mid 80’s Kilslug, addled that first release with nuance to gild their otherwise Unsane influenced first instance. The vocalist dropped out and Fine China Superbone would literally jam on as a four piece eventually releasing their ‘probably overlooked because it was instrumental’ second record ‘Make​-​Machine’ (2010). Though I enjoyed discovering it today, especially with some old Caspar Brötzmann reissues cropping up recently, but it wasn’t exactly fucked up enough for the Skullflower crowd and kinda begged for vocals. A guitarist left, a bassist left, a new bassist came and by 2015 we had a slimmer, older and hairier Fine China Superbone in trio form and knocking out the slick ‘Fine China Superbone’ EP in 2015 and from there they’d found the right fit, the right studio (Bear Bites Horse) and enough folks interested to make the whole thing worthwhile. Enter ‘Plaguey’, a stupefying and punched-out noise rock album with just enough ‘modern’ math rock nuance to blur the eyes of the new generation and plenty of ragged, sleazing insanity to make an old freak mouth foam.

These Dutch string-wranglers point to Dazzling Killmen first as early inspiration and I think most listeners will find the dynamic about as varied and ‘unexpected’ in its twists and turns as a record like ‘Face of Collapse’. I’d additionally recommend Tar‘s ‘Jackson’ and Unwound‘s ‘Repetition’ for an atmospheric reference, Fine China Superbone are definitely not a post-hardcore band but they’re also not as dejected or atonally stoned as a band like Colossamite, either. ‘Plaguey’ has an immediate and crooked sound that cranks discordant hits out in that bluesy, methed-up sort of fashion that you think The Jesus Lizard‘s ‘Goat’ sounded like but that’d just be the style of noise rock since; A bulbous and gorgeous bass tone pulsing and pinching through strings of anxietous, mathematical guitar skronk too clever to sound random but still wild as it hits. As with Heads. most recent record there is a sense of chill peppered throughout (see: “40 Years in the Desert”, “Somewhat Corny”) the full-listen but Fine China Superbone are ‘on’ the majority of the time, pulling out a surprisingly dense and frenetic noise rock album that should dazzle even the most diapered math rock dilettante with its guitar work. I wouldn’t say, at all, that they’ve come full circle back to the ‘How Long is a Chinese?’ days but rather resurrected all of that spirit with a thousand times more insight and ability.

If you know my dumb ass at all you’ll have gotten the sense that I don’t even bother with noise rock unless the damn bass guitar performances drive the ship in at least equal parts with the guitar strangling. Here the dynamic aptitude of bassist Joeri shines thanks to that golden ‘NoMeansNo ratio‘ that allows the bass tone to cut through and signal transitional moments and shifts in tone within these fairly complex noise rock compositions. In this sense it does feel like their engineering the production digs took some time to understand the intended Fine China Superbone sound which is gnarly, but never too messy. The moody intensity of “Mistake” paired with the fight-and-flight aura of “40 Years in the Desert” ended up being the big moment that sold me on ‘Plaguey’ in general and the rest of the album ended up being pretty golden after a couple of closer listens. In terms of the full listen I could probably do without “Fear of Heights” as it feels too similar to “Benefit and Comfort” in terms of structure but, it doesn’t drag the experience down in any sense.

Though I wouldn’t restrict my recommendation of ‘Plaguey’ to the greater noise rock fandom of the internet I would suggest a math rock fan to not jump in expecting anything too maniacal in terms of direct style, but there will be enough nuance and convolution to sate and entertain the detail oriented listener. Fine China Superbone landed in my lap in ultra-fine form on this latest record and I spun it all month hoping I’d eventually grow tired of ‘Plaguey’ but in no way did I ever develop any immunity. Highly recommended. For preview I’d say “Mistake” will suck you in, “Look For the Dry Spot” will stand out, and “40 Years in the Desert” will be the vector of infection. 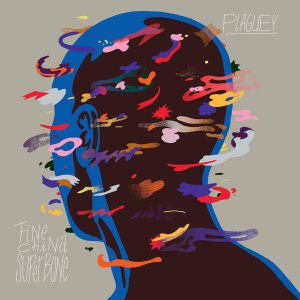