The taming of wild beasts and grand defiance of death by way of great feats of gymnast and cruelty alike is a sagging, grease-painted hole that quickly puckers and fades with the last several generations of entertainment. The circus was a sad, cretinous spectacle when I was a child in the late 80’s as I’d surely seen more vibrant fare, we all had. It wouldn’t be until horror movies, animal abuse documentaries, and a love affair with the ‘freak’ within reality television that the Circus brought its most valuable and terrifying association beyond indifference. The forceful, desperate nature of a clown is an art so terrifying to behold today because at some point it refused to evolve beyond the romance of the exaggerated entertainer and as such today it represents a sort of ‘mask’ for the disturbed and a cliche for the jilted villain who’d snap, typically in costume, resulting in great bloody massacre. How naturally this circus of ‘depravity’ would connect with the bleak world of storytelling created by Oscar Méténier, a visionary for nigh nihilistic tales of murder, providing horror entertainment for uptight late 19th century Parisienne folk packed with acid-flinging, blood spraying, eye-scooping rape and murder. In fusing his own ‘cirque macabre’ with Le Théâtre du Grand-Guignol storytelling Pensées Nocturnes mastermind Vaerohn crafts blackened chamber musique that would shock and befuddle even the most fucked up mind who’ll need to steady themselves before daring to venture within its colorful billows of insanity.

Pensées Nocturnes is a restless monster that was detailed from the start but, not defined by those details until ‘Grotesque’ (2010) where the wailing ‘suicidal’ black metal of their debut felt a dramatic sweep a clear shift outside of genre and into conceptual pieces that deftly fit their intended themes. It is a wild and atmospheric masterpiece that drove the growing fandom of French avant-garde black metal into a frenzy. Famously in protest of the circus of online piracy and the injustice of the situation (my own words) Vaerohn would release a rearranged version of ‘Grotesque’ entitled ‘Ceci est de la Musique’ (2011) and I will never forget how hilarious it was to see reviews for it from people who’d not done any research even years later. The momentum beyond that album has been stunning in terms of conceptual reinterpretation of black metal and ‘À boire et à manger’ (2016) is unquestionably a righteous highlight in the five album path towards ‘Grand Guignol Orchestra’ today. Yet you should not have expected a ‘follow up’ recording and early February greeted me with perhaps the most challenging black metal related release of the year thus far.

Pensées Nocturnes describe their music as déglingué black metal, a descriptor that suggests brokenness or ramshackle construction and on previous records I would have disagreed in some respects. Vaerohn’s compositions weren’t cobbled together but a smart deconstruction of outsider inspiration flowing into jagged bursts of black metal, on ‘Grand Guignol Orchestra’ all creatures that’d hide in the shadows arrive on stage fully lit with broken neck and shit-stained boots ready to perform their bloody dance. There is no air in this place filled with cigarette smoke and iron-scented humidity as the intense ‘chaos in unison’ of this record becomes maddening. Free jazz-esque peppering of discordant guitar wrangling and avant-cirque rhythms don’t allow a moment to breathe as if Imperial Triumphant and A Forest of Stars were performing blindfolded at some sort of themed asylum. The potential for dramatics is ousted with such a transfixing performance that ushers away all traditional black metal forms, a feat even goofs like  Carach Angren wouldn’t dare alienate with, and what is left is a bout of dirges spotted with several gorgeous flourishes of saxophone, calliope, theremin and such.

Are you insane? If not, what better trigger to set you over the edge than this glorious cacophony of hellish, jazzy blackened circus music? It is not musique concrete by and stretch of the mind but it is made savagely ugly thanks to the truly atmospheric level of discord the guitar work contributes. Absurdist and ugly, bloody and feral, the camp and horror of it all is something new and something truly different. If the aim was merely the avant-garde then ‘Grand Guignol Orchestra’ is a conceptual masterpiece that you’ll probably listen to sparingly due to its challenging, ruinous nature. Within the maelstrom you’ll need to pinch yourself, spin the top, take a break, shake it off, and eventually you will give into the anti-arrangement of Pensées Nocturnes artful sixth album and merely feel the mania as intended. It is a curious piece to recommend as it is an imposing and cruel piece to begin with that only becomes more imposing as soon as you feel comfortable enough to analyze even just the basic flow of rhythm. If you’re up for it then I’d say there are great, maddening depths to soak in. Highly recommended. For preview  “Poil de Lune” is a fine showpiece for the first few acts of the album and then to balance that impression out try the ultra-dramatic peak of “Comptine à Boire”. 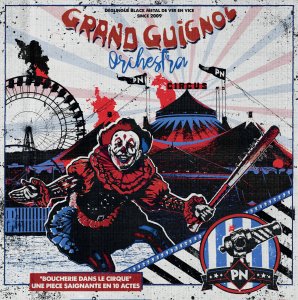