Originally self-released in November of 2017 and limited to 60 copies, the debut demo from São Paulo, Brazil warfare noise-crushers Necrogosto was too fine a work of bestial thrashing madness to leave sitting in a handful of die-hard South American collections. Though it saw reissue through Polish label Morbid Chapel in similarly limited numbers, and a compact disc through Brazil-based Resistência Underground, the Necrogosto curse hasn’t been widely available in most territories until now. Why does it still warrant mention two years later? These hooded stranglers all come from a filthy corner of São Paulo’s underground extremes with members of Nuclëar Fröst, Beastkrieg, and Whipstriker among the ranks and they know their stuff. Hey, I’m sure those name drops are pretty meaningless though, and the appeal will be more obvious once you’ve let the reverb-soaked, hardcore-punched, bestial war-thrash hell of it grab ahold of your shit.

The sound of this tape is just incredible, somewhere between the spacious clunk of early Mystifier tapes, the groaning pulse of Sarcófago‘s ‘Satanic Lust’, and the more pronounced bruised hits of Grave Desecrator. The style itself intends to resurrect the gods Sarcófago, Sextrash, Expulser, Insulter, and that whole outrageous scum-fucked blend of hardcore punk, first wave black metal, and brutal late 80’s thrash. The result is pretty close and in some ways it feels like an extreme exaggeration of those old demos that’d define bestial black metal and war metal with a heavy boot full of the thrash ‘edge’ felt on Obscurity and Messiah demos as well as ‘Bestial Devastation’. If you’re looking for that sound no doubt you’ll pick up on the intended authenticity that has justified wider release of this demo the moment you fire it up.

“Ritual and Decay” is immediate and immense in its rabid fury and moshable trill-doomed riffs that alternate into a deeply satisfying war-thrash torrent. They’ve arranged these songs to flow together like a 20 minute live set and the echoing sound of the tape puts you right there at the mouth of the crypt they’ve broken into for rehearsal. The thing sells itself with catchy, brutal riffing throughout. The full listen is seamless with the exception of “Blasphemous Upheaval” which didn’t provide much more than a break from the more intense ideas surrounding it. Spinning my way through this demo several times in a row was a rush, the same way I felt the first time I fired up ‘Oath of the Black Blood’, and ‘Under the Sign of the Black Mark’ for that matter, it took me back and had me seeking out old Death Yell and Mortem demos for contrast. ‘Necrogosto’ is a solid blast of bestial metal that doesn’t get so lost in speed or repetition as similar bands often do. The full listen never becomes rote or forgettable for my tastes and it comes very highly recommended. For preview, honestly it is only 20 minutes long so the full listen is easy enough but I’d say most folks will be sold after the first two tracks, “Intro” and “Ritual and Decay”. 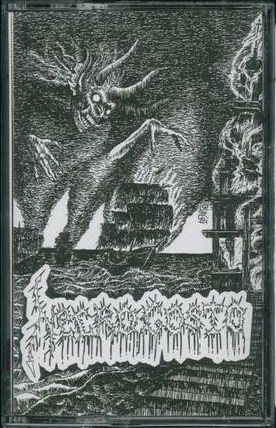