In divining the evolutionary traits of extreme metallic vastness amidst following several hundred careers over multiple decades a set of potentially imagined ‘thought lineages’ begin to reveal themselves through the murk of influence and expression. The pillar that is Swedish chaos magick planted with Tampa area seeds in the early 90’s is a world tree’s worth of patternation to expand upon; To see its applications within ‘modern’ blackened death metal of the last twenty years surely comes with a morass of pretender and hangers-on to shed before figuring any vitality subsequent. Where I begin to fully feel the ‘true’ lineage set alight with the black flame is perhaps early Necrophobic translating into a record like Runemagick‘s ‘The Supreme Force of Eternity’. Those tendrils grew and wrought slippery havoc upon Cenotaph‘s vision that’d blossom into the ultimate forms of The Chasm on ‘The Spell of Retribution’. From there several grand attestations to the dark are just slightly deeper out of view with Infinitum Obscure‘s malevolent ‘Ascension Through the Luminous Black’ and perhaps Hacavitz‘ ‘Darkness Beyond’ existent as shadowy magnifications of the craft. In keeping this tradition of semi-melodic blackened death metal alight with sinister grace Portland, Oregon atavists Ænigmatum resurrect and elevate that high-potency artform, as their forbears did, unto a wildly repeatable experience.

Though the previous paragraph entirely sums the stylistic qualities of Ænigmatum the 2017 formed project additionally cites Deathspell Omega and Death for deeper context and while this is fitting the most appropriate and direct comparison is The Chasm. To pile on even more crushing expectations when approaching this fine debut album the line-up features several accomplished death metal musicians in their own right between current and former members of Blood Freak, Diabolic Oath, and Torture Rack. Though it hadn’t been entirely polished and purged as a collective until 2017 the groups main songwriters had been at work on this set of songs going as far back as 2005. Depending on how rose-colored your memories of those days are this record might feel like a dive back into those days where brutality still reigned supreme but began to lose some footing in the greater scheme of things as several melodic gems would begin to perk above the blasting din. Anata was surely one of the first bands I’d noticed finding a sort of sacred balance of the times back then and I get some of that feeling from Ænigmatum even if I’d had to consider it an undeserved time capsule to get there.

With fluidity of rhythm provided by melodic black metal accentuated by the variation and directional nuances by way of progressive semi-melodic death metal a madness inducing meshing of climes creates a frost-bitten volcanic horror in the capable hands of Ænigmatum. It is meandering and adventurous without losing the exemplar performative ambition that Dissection would provide for so many generations beyond; I don’t believe I’ve come across anything as effective in translating these standards since ‘The Spell of Retribution’, an album I’d compare to this debut with great respect for both. The unavoidable side-effect comes with that riff-salad of arcing progressions that Corchado would become known for, and become lost in at times. Herein lies a small blockade in terms of the memorable aspects of ‘Ænigmatum’ when a piece wanders too far off into the cold and I lose the thread. This only occurred during extended listening sessions where I’d spun the album 3-4 times in a row and it became a slight blur.

Fans of Necrophobic‘s first album as well as 2000’s era The Chasm will be inspired by the guitar work within but this isn’t truly a throwback record. Seekers of modern rhythms shouldn’t fear the ‘update to the timeless’ that Ænigmatum suggests on their debut; I say this because drummer Pierce Williams is an insane talent which should have been clear on even the most casual spin of Torture Rack‘s ‘Malefic Humiliation’ last year and you’ll hear it loud and clear throughout ‘Ænigmatum’. “Lashed and Scorned” is the hook and the first masterpiece of the record and when paired with an almost ‘Terminal Spirit Disease’ attack on “Boundless” I was immediately sold on this record. With closer listens the album became even more imposing in scope and dynamic with the bulk of the most exciting riff ideas gelling into a record that flows in a brutal, intentional way highlighting several fantastic performances. This sort of record only comes along so often and I found myself immersed within Ænigmatum‘s spell for hours at a time whenever I’d put it on. Very high recommendation. For preview I think the duo of “Lashed and Scorned” and “Boundless” will be an instant sell for anyone seeking the finer lineages offered by blackened death metal. 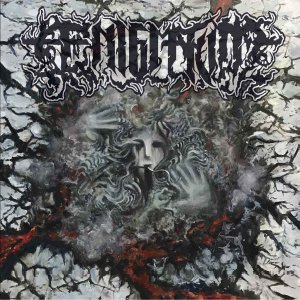