As before, as always, I approach any split release already loving one band and with little feeling for their counterparts. This time around the fates have dealt a cruel hand in the sense that I cannot lazily write off Lucifer’s Fall in favor of polishing Cardinal’s Folly‘s dagger as it is well-and-clear that they both rule. Of course Helsinki, Finland occult doom metal trio Cardinal’s Folly have quickly become one of my favorite ‘modern’ doom bands of the last five or so years thanks to a ‘Holocaust of Ecstasy & Freedom’ (2016) and ‘Deranged Pagan Sons’ (2017) not only for their twisted, psychedelic incantations but for Mikko Kääriäinen‘s increasingly distinct voice and lyrics. Is there a more formidable Finnish doom metal project kicking around today? Not for my taste and they’ve penned twenty minutes of signature sounds to make that case for a few years longer.

Now more than ever Cardinal’s Folly begin to sound like early Lord Vicar, when Chritus sounded a bit drunk and the riffs were still ultra-downtuned and fresh off of ‘III: So Long Suckers’. The growling barks don’t chime in as often as ‘Deranged Pagan Sons’ and despite the much heavier subject matter; Ariosophic priests conduct occult rituals, Nordic mysticism soaks its way into darker historical times and well, the equally historic subject of Bathory‘s ‘Hammerheart’ (see: “Sworn Through Odin’s & Satan’s Blood”) make this some of the most compelling work from the band thus far. It absolutely feels like they found themselves two records ago and they’re still ‘feeling’ themselves today in creating a unique brand of surreal, fucked-up and heavy doom metal. This is where I’d usually say that Cardinal’s Folly are the only reason to grab this split but I’ll be damned if Lucifer’s Fall don’t impress nearly on par with their side.

Adelaide, Australia isn’t a hotbed of doom metal activity by and stretch of the imagination but between his three projects (Lucifer’s Fall, Solemn Ceremony, and Dire Fate) musician Phil Howlett (ex-Rote Mare) brings a taste of the classics to everything he touches. Lucifer’s Fall has served as a sort of spiritual successor to Rote Mare in the sense that its original line-up would come from that project but they’ve been slightly amorphous since 2013. Their style of doom metal tends to borrow something truly old (Pentagram, Saint Vitus) and something slightly less old (Reverend Bizarre, new-ish?) but their material for this split sheds some of the punkish stoner-rockin’ whip that stirred things up on ‘II: Cursed & Damned’ (2016) in favor of a very Saint Vitus-esque couple of tracks with drug-induced Satanic hallucinations obscuring the way forward. I’d have liked one more song from Lucifer’s Fall here just to balance out Cardinal’s Folly slightly but I’ll take this quality over quantity for the sake of it either way.

This split is damned easy to recommend thanks to two classic-assed bands who truly compliment each other on a full listen. For a roughly 35 minute doom record the pairing of Cardinal’s Folly and Lucifer’s Fall ended up ‘going’ together better than expected, especially considering each have a hint of Reverend Bizarre in their musical influences. Highly recommended. For preview you should jump right into “Spiritual North” if you’re not already a Cardinal’s Folly fan it is a nice induction and then for Lucifer’s Fall “Die Witch Die” has a more immediate hook on their side. “Sworn Through Odin’s & Satan’s Blood” is the real piece de resistance of the whole record, though. 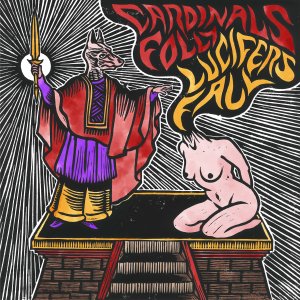