After the great fire of Nero’s Rome three glorious centuries of punishment would see Christians considered enemies of the state, the lowest of criminals, and what punishment the emperor would popularize created a trend of death by the maul of beasts. Majestatis rei committed by monotheists landed them in shreds by fang of wolf and dog to begin with but, as the state met with persistent defiance so intensified the elaborate sport of bestial torture; Tied to bulls then flung and stomped into mush, tied to posts and torn by great cat, bear and gladiator alike, the blood of the insolent would flow so regularly that the idiom ‘Christians to the lions’ held deep and violent meaning to those opposing what trash and pest would follow Christs lies. Among the unwilling bestiarii many a martyr were born in the midst of these punishments leading to political edict that would spare them soon enough citing internecine effects upon the polis. Today it wouldn’t be so outrageous to insist the flock of Christianity be culled in similar fashion, had we any beasts left to slaughter them with, with judgment for their ruinous followership and easily manipulated culture of ignorance. As the lion’s claw and wolven fang can no longer penetrate flesh so from below we must conjure the din of Satanic dominion by fire-branded word and razor-honed riff. As scarce as great predator today are those masters of the riff and the ritual therein, so lies the important potency of surviving masters of the craft Houston, Texas area death metal legends Imprecation who offer ‘Damnatio Ad Bestias’ as true violence against the cult of Christ.

Poured from the same expulsion that’d birth early 90’s United States death cultists Infester, Morpheus Descends, and Crucifier (all of whom landed in crooked alignment with the slightly elder gods of Goatlord, Immolation and Incantation) the music of Imprecation shaped rigid form from chaos abruptly and with great power after just one year of existence with their ‘Ceremony of the Nine Angles’ (1992) demo. The style of this first release was all the more exciting for the drumming of Ruben Elizondo who’d take the risky tempo experimentation of Exmortis (Maryland) and Infester then flip that intensity towards the precision of the New York death metal scene of the time. Describe it however you’d like there is a thread of urgent, blasting force running throughout the otherwise doomed pace of Imprecation‘s work that serves their legacy well with both intricate death metal interest and feral war-like classicism. This remains true today as ‘Damnatio Ad Bestias’ grinds away at a slightly different type of stone than that of their return ‘Satanae Tenebris Infinita’ (2013) without losing their classic, distinct attributes along the way.

‘Theurgia Goetia Summa’ (1995) is an odd presence in my own collection as its reissue had been an impulsive purchase in 2010 without more than the suggestion of Incantation-esque sounds and a psychotropic cover image. Fitting as those hints were at the time, Imprecation aren’t so easily compared. This is especially true when considering their two full-lengths since reforming a decade ago. The death/doom metal fan will find a righteous mid-pace expresses the most vital, intricate ideas the band come with but the distinctive traits of Imprecation come from holistic dynamism and not stylistic obsessions. Doom riffs, breaks of blasting fury, intermittent keyboard work, and the ever harrowing roar of David Herrera (Christ Dismembered, ex-Bahimiron) all contribute to this intense churning of classic death metal that pushes a few steps beyond cult reapers like ‘Barathrum: V.I.T.R.I.O.L.’ and ‘Stronger Than Passing Time’. From my perspective ‘Satanae Tenebris Infinita’ was easily one of the best releases of 2013 so the news of a follow-up came, circa 2017 or so, with some considerable hype. Why had I completely forgotten about it until it hit my inbox last month? I had nothing but confidence in the work of these musicians and ‘Damnatio Ad Bestias’ absolutely reinforces that confidence. In some ways they manage to exceed expectations.

What made ‘Ceremony of the Nine Angles’ so exciting back in 1992 absolutely lives on in this second full-length from Imprecation. That transition between blasting brutality and doomed crawl is now increasingly akin to the dynamic of ‘Realm of Chaos’ (or, ‘The Rack’ at times) rather than ‘Onward to Golgotha’ and though this isn’t a major shift for the project the influence of new guitarists since the previous album should be somewhat obvious even if the ethos of Imprecation is unchanged. “Dagger, Thurible, Altar of Death” and the rest of Side B beyond the title track start to emphasize that approach to the point of formula as the record concludes. I’m enough of a fan that this isn’t a hindrance, and there are hints of Morbid Angel and later Morpheus Descends working their way into the mid-paced ‘On the Wings of Inferno’-esque sections throughout that feel ‘fresh’ and violent enough to confidently carry the weight of Imprecation‘s past. It’d be trite to suggest that this record is ‘better’ than ‘Satanae Tenebris Infinita’ but to say that it has some improved polish (Dan Lowndes @ Resonance Sound Studio) and a more brutally achieved doom resonance would be fair.

As a fan of death metal who often sinks away from iterative modern releases towards various other metal sub-genres ‘Damnatio Ad Bestias’ is a striking reminder of the power that classic death metal ethos holds when wielded with a heavy hand. With such a focus on atmospherics, self-conscious niche filler, and post-everything fluff goddamn does it feel incredible to feel the crushing blows of a truly heavy and evil death metal project. It stands out today the same way recent records from Drawn and Quartered or Dead Congregation do, huge hulking sound and guitar work that never sounds bored with the medium for a second. Imprecation’s second album is easily one of the best death metal records so far in 2019 and it comes as one of my higher recommendations this month. Highly recommended. For preview “Beasts of the Infernal Void” really stands out for its composition and the cosmic dread of the outro but I’d also recommend “Temple of Foul Spirit” if you lean towards death/doom and “Dagger, Thurible, Altar of Death” for a classic-assed ripping Imprecation song. 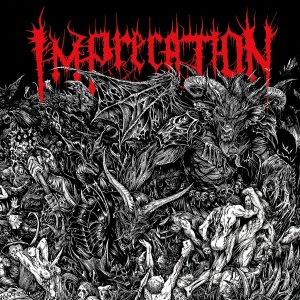