If you’d been lucky enough to reach young adulthood within the last thirty or so years no doubt the age of the ‘internet bubble’ prior to the Orwellian monopolization of the internet, and subsequently todays era of discontent, gave you so many ‘red pill’ moments to swallow you’re still shitting out the capsules in 2019. The internet was the ultimate tool of information even at one hundredth of todays speed and for intrepid teens in the late 90’s and early 00’s such as myself absolutely anything and everything was a click away. Curious about drugs? Erowid was full of pre-teens and old weirdos telling you to kill yourself with salvia divinorum. Curious about horrible fetishes? Murder? Savage torture? Bestiality? Gore? How about straight up fuckin’ horrible death metal music? A thousand times yes, you could have it all. It is easy to forget that although those things exist in every corner of the internet today the massively monetized social media user base no longer steers where they cannot be catered to. The truly shocking and depraved things that’d shock a kid off their tablet is widely considered unmarketable and lets face it, most folks aren’t going to bother with todays ultra-censored internet culture if they aren’t making money. Bullshit, right? Toss an album cover like ‘Posthumous Humiliation’ on Facebook or Twitter and the kids go frickin’ bonkers for the artfully hanging jumble of a mans face after he’d been splattered forehead first by a truck. The kids these days, they’re hungry for more than blood anymore they want to chew the bones and fry the organs. It turns out they want Pissgrave bad and as it turns out this Philadelphia, Pennsylvania quartet aren’t fucking around pandering to anyone. ‘Posthumous Humiliation’ is as heavy, raw and brutally inaccessible as a death metal album can be without completely losing resemblance of the style at all and it might be considered a triumph just for that fact because no doubt established fans will only find ‘more of the same’ therein.

The art of brutal death metal that had developed beyond early Cannibal Corpse and Suffocation among others in the late 90’s to the point that it became truly ridiculous extreme music worthy of parody and a source of anguish for folks who’d seen the artform ‘peak’ tastefully in the middle of the decade. The righteous and clangorous abandon of the music became an incredible movement that sought a deeper-still tunnel beyond chugging riffs, tin can snare drums, pitch-shifted puke vocals and gory art and many would argue the briefly fruitful existence of goregrind was a good sign everyone had gone one step too far. What am I getting at? In many ways the music of Pissgrave is contemptuously tame compared to what came before it and that folks would be shocked by a car accident photo and some cavernous Infester influenced war metal is silly as fuck. From their first demo in 2014 you could hear the thrashing rip of classic death metal a la ‘To The Depths in Degradation’, Immortal Fate, early Deicide, and even a hint of that ultra-Corpse sound that Desecration is still desperately peddling in the music of Pissgrave but, it’d be more natural to place them alongside the filthiest releases from Triumvir Foul, Pig’s Blood, and Ascended Dead in consideration for atmospheric value and brutality.

‘Suicide Euphoria’ (2015) was a fine debut that simply made good on what their self-titled demo would promise, a raw and gnashing hit of war metal intensity and stripped down ‘old school’ death metal ethos. There is a pure, uninterrupted wall of static intensity crowning that debut to such a degree that it almost sounds ridiculously lo-fi and anti-music. This is where the actual extremity of the songwriting is implied rather than forced, hence the war metal tag, and this despite Pissgrave featuring a very active set of guitarists who are relentless. All of this can also be said for the follow-up ‘Posthumous Humiliation’ but this time around they’ve pulled in a sliver more late 90’s brutal death metal into the actual guitar riffs. I’d say the difference between Infester and Deeds of Flesh‘s ‘Path of the Weakening’ influence is obvious enough that tracks like “Canticle of Ripping Flesh” should be a great point of interest for the initiated but none of the material will offer anything unheard of. Where Pissgrave do stand out comes when they slow down a bit and grind out some Incantation-esque moments (see: “Funereal Inversion” through “Into the Deceased”) along the way. This should come as less of a surprise considering the shared history among members largely focuses on doom metal variations (Oak, Serpent Throne, Otesanek, The Body, etc.) but they do bring yet another admirable throng of grinding death riffs all the same.

The classic death metal riffs are here from front to back and although they’re often as messy as the contractually obligated ‘In Torment in Hell’ era of Deicide most of Tim Mellon and Demian Fenton‘s work on ‘Posthumous Humiliation’ hits its intended mark of savagery. I’d say this is meant for the death metal fan and though I’ve suggested war metal as an adjunct descriptor there is no ‘scene’ or devout aspect within; A similarly brutal attack is expressed with a blackened feeling that comes from both the dual vocal layers and what I’d consider ‘atmospheric’ riff sections that provide respite from brutality. I suppose my only complaint is that they’ve only just clarified the production value of their sound enough that each instrument is audible and this had me wondering if their whole concept might not work if not for the veil of brutal fidelity; The riffs say otherwise but I’d like to see them work with the full capabilities of a producer like Arthur Rizk. Although I’d initially written off this record as somewhat pointless and merely iterative a closer look at the guitar work revealed a much more thoughtful Pissgrave, a sickening experience that was meant to repulse and depress. In hitting that mark head-on I feel like I can recommend a full listen but I doubt this is a death metal album for the ages. For what it is, I can give moderately high recommendation of ‘Posthumous Humiliation’. For preview I would go for “Funeral Inversion” as I think it brings something new and then “Canticle of Ripping Flesh” for a one-upping of their prior work. 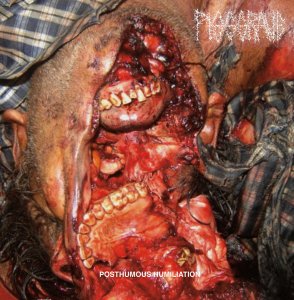