For those of us who would spend our lives digging through every record store encountered, and likewise scouring the internet, endlessly in search of the forgotten beauty that the various trends and surges that obscure metal universe provides globally, a band like Mustan Kuun Lapset presents an exciting point of interest. Decidedly regional in terms of only using the Finnish language, and entirely local in their intended reach, the melodic black (and later dark) metal style of these lesser known Hollola legends has persisted since the band would form in 1993 as Häiriö. By 1995 they would become Mustan Kuun Lapset, roughly translated as “Children of the Black Moon”, and that Mark I line-up would largely hold fast until their first grand funeral in 2007; Having reached glorious heights in terms of thoughtful and intricate throngs of melodic guitar leads it is a wonder they are yet remembered with as much heraldry as even far less active (or interesting) groups like Black Swan or Thy Serpent. Resurrected in 2010 and now humbly releasing their sixth full-length, ‘Valo’, Mustan Kuun Lapset appear as timelessly dour and distinctly Finnish as they ever were. Still happily frozen in an era a thousand times more romantically demonstrative than today, it is a joy to receive the meditative gloom of ‘Valo’ in 2019.

In digging through piles resultant of my An Exhaustive Study: Melodic Black Metal feature these last couple of years I would eventually reach Mustan Kuun Lapset‘s first two demos ‘…kunnes loppuu yö’ (1996) and ‘Varjomaa’ (1997) with some great enthusiasm as early Finnish melodic black metal tended to be poorly conceived and unimaginative (see: Catamenia) in the mid-90’s when so many me-too melodic metal bands had sprung up across southern Finland. The band would have a solid four album run in the 2000’s and in my quest to secure them all I found the one that resonated with me most, ‘Kauniinhauta’ (2003), was difficult to find and import in its original form. The month it took me to secure a copy of that album helped establish my own fandom for this somewhat obscure Finnish band but if you’re less dedicated to that sort of detail it is easier to find copies of ‘Suruntuoja’ (2002) and ‘Talvenranta’ (2005) and either record should suffice in communicating why Mustan Kuun Lapset are interesting beyond your average melodic Finnish extreme metal band; Much of that will come from guitar work that is relevant to their regional melodic extreme metal style but with an emphasis on early Scandinavian melodic black and death metal along with some intermittent thrash influences. I might be overselling the actual aggression of the music, though, as the core appeal of Mustan Kuun Lapset comes from not-so-saccharine melodic lead guitar driven melodies that hold the same sort of appeal that made late 90’s Rotting Christ and post-’96 Amorphis something special and lasting, apply a bit of early Moonsorrow to that and you’re in the right neighborhood.

Sole original member Pete Lehtinen (vocals, guitars, keyboards) is an incredibly consistent composer in the sense that his own combination of highly melodic black metal and accessible ‘dark metal’ atmosphere is distinguished with a certain musical personality across each Mustan Kuun Lapset record. The style on each album is adaptive to changing tastes and interests and could lean towards melodic death, black metal, or otherwise without losing sight of the projects own heartbeat; A fan that loved ‘Suruntuoja’ could easily recognize and appreciate ‘Valo’ and/or ‘Saatto’ (2017) today though each record has its own feeling and set of themes. If ‘Saatto’ was a procession then ‘Valo’ is the long walk towards the light, wherever it might lead. This sixth record from Lehtinen and crew doesn’t lose sight of their signature melancholia, darkness, whatever you’d like to call it but there is a more mature touch handling ‘Valo’ since reformation. Some of runoff from Lehtinen‘s work in folk side project Talvenranta accentuates the generally diversified range of ‘Valo’ in the form of some acoustic passages throughout as well as the grand entrance that “Kuninkaan Uni” provides. “Eksyneet” is the most proper comfort zone to duck back into and ensures that this is still very much as Mustan Kuun Lapset record only with freshly sprouted and ever-stretching wings that age and wisdom provided. That’d be the most meaningful takeaway after a closer look at the progression of this project, that an artist who’d know thyself is less likely to get lost in absurdism along the way.

Of course this is catchy, melodramatic dark metal with a fair dose of 90’s Scandinavian extreme metal sensibility attached so the ‘absurd’ is surely relative. As such, the hooks come fast and with an unusually ethereal bit of forestry attached, especially on the single “Kohti Valoa” which serves as exemplar capture of earthen, existential, and mournfully rich melodic fair that both Finland and Mustan Kuun Lapset are known for. “Ikaros” is perhaps the most direct ‘hook’ here but each song has something worth returning to even the chuggy jog of “Nostalgia”. For my own taste I found “Tropaenum” a nice surprise towards the end of the album with its ‘Talvenranta’-esque approach and what I’d consider some classic Amorphis influence as it progresses; In fact any chance they get to use Ville Pelkonen‘s (Letheria) vocals tends to work out quite well.

‘Valo’ increases in value with familiarity and thrives within its revolving fire of catchy and stoic moments. It is a listening experience that’d suggest a more reflective experience and encourages the listener to appreciate the moment both as it comes and as it fades. I can recommend it highly, perhaps more highly than I’d expected, due to some value beyond nostalgia and previously established style. Moderately high recommendation for dark metal and melodic black metal fans. For preview I’d say the clincher for sentimental fandom will be “Ikaros”, the enlightenment will seep from “Kohti Valoa”, and new fans will be won between “Eksyneet” and “Tropaenum”. 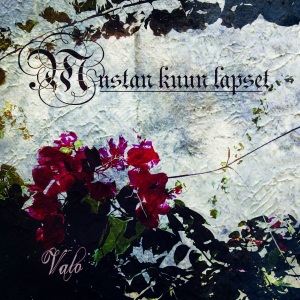