Pittsburgh, Pennsylvania death metal upstarts Riparian make a slickly brutal first impression with their self-titled debut EP just a couple of years after formation. Comprised of key members of blackened death-grinders Wrought Iron, Riparian would expand to a five-piece with the addition of guitarist Dan Martin (ex-Vrolok) and former Grisly Amputation vocalist Rob in 2018. Though black metal fans might recognize Vrolok and Pittsburgh brutalists might have a whiff of those other long standing groups, no doubt only the mention of Wrought Iron will resonate with the style of Riparian thanks to the brutal style of drummer Nick Tupi. Their approach is deceptively simplistic thanks to a drum-forward, bass heavy mix that invokes a heavily polished jolt of brutal death with very mild grind and sludge influences.

That sharp first impression will immediately resonate with the ‘old school’ brutal death head who fiends for the bro-grooves of ‘Trading Pieces’ era Deeds of Flesh, early Gutted, slightly more modern slammers like Gorerotted (see: ‘Only Tools and Corpses’) or early Aborted, and the technical wrists of Reciprocal. What distinguishes Riparian from a head-first old school focused local bruiser like Scorched comes with their laser focus on the groove of post-‘Souls to Deny’ brutal death and the semi-technical ambition that comes by proxy. It is almost entirely a groove based experience, hence the deathgrind feeling of it all, and not such a ‘riff’ focused experience that it begins to feel anxietous or too self-conscious in achieving heaviness. If anything I get the feeling that Riparian are almost too balanced and meticulous in their approach to the craft.

I’m consistently impressed with the clean, sub-genre appropriate production values that the in-house production team at Grimoire Records brings. The adaptive capabilities shown even in the last three very different releases (Myopic, Yatra, Riparian) are impressive in the sense that they show a full understanding of what each band is about and how they’d best show on record. I know this would seem to contradict my earlier statement that Riparian feels overly ‘honed’ and left without enough of a rough edge but that comes down to tightly wound Suffocation-esque compositions rather than any gnarl that could be applied to the guitar or drum sounds within. The modern death metal formula becomes slightly faceless when the goal is to balance melody, brutality, technicality, old school, new school, etc. and that comes down to one’s taste for the slight absurdity that helps extreme metal projects stand out. “Event Horizon of Artificial Existence” is a great example where too many fantastic things are happening underneath the thrust of the drums leaving a really fine bass performance for those who might crank the record up to unhealthy volumes. It’ll be most effective cranked either way.

At the end of the day I could probably recommend Riparian for their brutal drumming and incredible cover art alone and still please about sixty percent of death metal fandom with a random spin. It does have a sort of thugged-out bassy groove that’ll draw in ‘old school’ brutal death fans (Everlasting Spew fans, especially) headfirst but, ‘Riparian’ makes such a professional and inoffensive first strike for a new band that I can hardly fault the EP for being the guy most likely to puke in the mosh pit. Moderate recommendation. For preview I think “Metrics Distortion” is the best track here and the aforementioned “Event Horizon of Artificial Existence” has the hook that will pique the average listeners ear most. 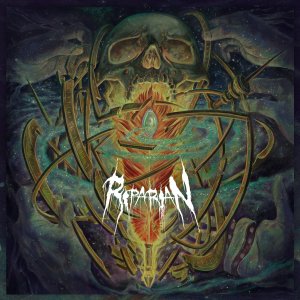