Here I present a ten album sampler of some of the best blackened hardcore and/or extreme metal punk hybrids from early 2019. Consider it a soundtrack to accompany the underlying panic felt throughout the working class as freedoms slip through swollen hands, to tired to grasp opportunity as it flits by. Most of these albums made it here to Ten From the Tomb because I couldn’t manage the time for a long-form review or because I really didn’t have more than a paragraph or two worth of insight beyond banal description. If you’re not into the selection this week, relax! This’ll be back every 7 days with 10 more albums from different styles, genres, themes, etc.

Hey! Don’t dive in thinking this will all be shit just because I am not doing full reviews for these releases! I always have some quality control in mind and looked for expressive, meaningful or just damn heavy releases that hold value without gimmickry or bland plagiarism. This weeks picks come from Patreon Patrons who vote on the subject of this feature every two weeks, thanks guys! I am eternally grateful for the support of readers and appreciate the friendly and positive interactions I’ve had with all thus far. Think my opinions are trash and that I suck? Want to totally tell me off, bro? Click away and let’s all live more sensible lives full of meaningful interactions. I’m too old and bored with people to care.

Still hot coming off of their debut full-length ‘Pora umierać’ last year Polish black metal/punk hybrid Truchło Strzygi have quickly reminded anyone lucky enough to come across them that they still rule. This quick and effective blast of three songs finds the band stripped down and pushed back a bit, allowing some of their more subtle black metal style to breathe. ‘Pora umierać’ was very abrupt, brash and raw whereas there is slightly more texture here along with a pensive, frustrated atmosphere. If you love classic European hardcore’s weirder side that avoids too much of the Scandinavian trappings then I think ‘Nad Którymi Nie Czuwa Żaden Stróż’ will have you clawing to listen to the rest of Truchło Strzygi‘s discography. The vocalist here was the original drummer when Bariel reformed Imperator in 2018, interestingly enough.

As freshly baked as NOLA sludge/death/crust mutants Romasa are, having formed in 2017, they’ve already got everything going for them. ‘Cheering Death’ is the sort of record that has me wringing my hands with anticipation for every burly growl and chuggy 90’s hardcore punch, and their approach has a certain filth-ridden burst you might expect from a band like Body Void but with their own crusty presence, a gnarled approach to noise and aggressive statement. Fans of Ilsa and Fister will both find things to love about ‘Cheering Death’ between Romasa‘s crust-sludge and deathly hardcore influences. I’m surprised there aren’t more bands going for the Hightower + Audiosiege treatment because thier combined touch on this one really slaps on serious muck without losing a bit of heaviness. 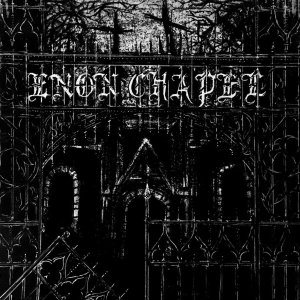 I am always excited to see what Acephale Winter is releasing next as they’ve been steadfast in their commitment to unique atmosphere in terms of black metal from the start; Enon Chapel absolutely met those expectations. A conjoined fetus, sewn between the skulls of Meghan Wood (Crown of Asteria, Iarnvidgur) and Balan (Palace of Worms, Botanist, Ordo Obsidium) this debut from Enon Chapel is a raw bastard child of atmospheric unrest a la Ophidian Forest and the dust-kicking primal hell of Volahn. It rides a harrowing wave of black metal guitar work, twisted in complex and circular rhythm that never depends on dissonance for ‘easy’ interest and instead pulls in exotic scale and melody for ambiguity. Wood‘s vocals are coughed and growled as a beast possessed and wounded, aided in their wretched puking curses by guitar work that evokes d-beat more often than it does Darkthrone. Having just played through Vampyr a few months ago, I found the theme of Victorian era London and the horror (real and literary) of the age is well expressed here. Of course this leans into pure black metal more often than not but the kicks into blackened hardcore/punk and thrashing moments will feel like black ‘n roll at its most effective.

A collage of neocrust, classic Swedish hardcore, and top-notch production gives Snake Tongue more of a ‘Linköping sound’ than I had expected. They are not a self-conscious band when it comes to style or resemblance and though you could easily compare them to Martyrdöd, Parasight and earlier Agrimonia they’re actually far more straight-forward than anything I’d compare them to. A couple of the songs on here almost kick into a ‘metal’ Totalitär sort of sound that I enjoyed but I felt they were simplifying their approach for the sake of a more melodic style. Snake Tongue could really go hard and wild if they cranked up the grindcore (see: ‘Raptor’s Breath’) or leaned into their ‘Elddop’-esque sound even further. ‘No Escape No Excuses’ seems headed in that direction naturally and I figure their next full-length looks promising from the angle this EP provides.

A definite challenge to sum up in a few sentences Denver, Colorado band The Munsens pull together influences from several pockets of sludge, doom, post-metal and even a hit of hardcore punk here and there. The style is pervasively sludge metal (a la Thou) in any given moment but the ‘Blessed Black Wings’-esque title track on ‘Unhanded’ gave me good enough reason to slip them on this list. Their niche is most definitely underground sludge metal and the post-doom metal ilk but ‘Unhanded’ contains a fair number of surprises as it plays to be worth recommending.

Thetan hail from Nashville, Tennessee and perform lo-fi, hard-assed powerviolence as a duo featuring a bassist/vocalist and drummer. These guys hit everything hard and fast with quick hardcore bursts of distorted bass and frantic drumming. It isn’t a goofy Lightning Bolt blast ‘o crayola noise-rock fun but instead a dark, dissonant shred that’ll have early powerviolence fans most excited. Brutal, wretched, dysphoric and ultimately very satisfying for the inner punk bassist ‘Abysmal’ is pretty hot shit overall. The listening experience will feel a lot like a live powerviolence/grindcore set list from 1998 with the guitar channel muted. Definitely the kind of band where I’m not sure I love their record but I’d definitely pay to see them live anytime they’re around.

Blood Cult were the drug-addicted, stillborn, Appalachian rape baby of Decatur, Illinois area experimental black metal impiety upon conception. Self-described at various stages in their career as ‘blackened punk’, ‘black n’ roll’, and ‘redneck black metal’ Blood Cult first appeared in the mid-90’s from the mind of musician J.R. Preston (Angelust, Bloodwoods, Lord of Depression, Tjolgtjar) and his noisome, raw experimentation on this compilation arrives bare and rotten worm-infested flesh. This is not a complete collection of Blood Cult’s demos but a selection of the more listenable ones with ‘Kill and Kill’ (1996), ‘Blood Incantation’ (1998), ‘Blood Cult’ (2000) the rawest ones largely featuring Preston solo and a small jump in quality is felt with the Japanese black metal influenced ‘Ayohuhisdi’ (2001) demo rounding out disc one. The second disc features ‘We Who Walk Behind the Rows’ (2004), ‘Goat Riders In The Sky’ (2004) and ‘We Are The Cult of the Plains’ (2008) demos and the progression from that point should be more listenable as you catch glimpses of the work surrounding Blood Cult‘s two full-lengths. ‘Chronicle of the Cornfield Cult’ is for the USBM fanatic, folks who are waist deep in the experimental excess that comes with the raw, fanatical side of the states. If you’re already familiar with Preston‘s work in Tjolgtjar and the insanity of bands like Enbilulugugal then you might be uniquely geared towards enjoying a compilation like this. Without a meaningful connection to this music I wasn’t really on board until the second disc, though I would suggest ‘Ayohuhisdi’ is generally the best full listen on here.

Pennsylvania crust-grinders Split/Cross fire off their debut LP with the spirit of sludgy hardcore greats like Dystopia and Deviated Instinct informing their attack. Their sound reminds me of Eyehategod as much as it does Disrupt and I ended up really enjoying ‘Rise of Discontent’ almost solely because of the furious depravity constantly spewing from its spin. Sluggish, chugging, screaming, and defiant to a point of excess I’d say Split/Cross would have blown my head off back in the late 90’s but they’re a fairly average event today. I don’t mean that as a knock, though, as it takes me back to a time when this sort of music really was the cutting edge of heaviness. The trio do a great job of it and I think if they embraced both hardcore and sludge extremes slightly more they’d be onto something mind-bending.

This Toldeo, Ohio based quartet features members of death metallers Mutilatred and doom/sludge band Hung from the Rising Sun though their style is deeply rooted in second wave black metal and primitive death metal. “War” is the main reason why I wanted to put this band on this list as its blackened hardcore dryness is a step between classic Darkthrone and the psychotropic bender of Inquisition. ‘Ending My Life to Destroy Yours’ is abstract and spacious with a regal feeling yet there is a dark primitive quality that will appeal to fans of Amebix and Hellhammer influenced black metal.

And lastly something entirely different. Influenced by unequal parts Scandinavian punk, sludge and doom metal this second full-length from Rovaniemi, Finland project Vallihauta is an out of body experience, a dipole in raging flux, a madness rising from the Earth and gurgling out a hex of death. ‘II’ feels unhinged and raw beyond their self-titled debut which was not far from the punkish, unpredictable doom of early Caskets Open but, also not as typically ‘doom’ in feeling. That this trio seamlessly integrates sludge, doom, and hardcore punk influences into their own fluid sound suggests a heavier hand than is actually employed and it almost feels like a clandestine atmospheric sludge record from the mid-to-late 90’s as it unfolds. I get the feeling that I am listening to a particularly heavy art rock trio thanks to the bare naked live recording that emphasizes a singular rhythmic tantalean ebb in and out of torturous anxiety that occasionally rests within the freedom of isolated gloom. Yep, post-metal early Celtic Frost? Maybe. Harrowing beyond expectation and far more clever than it lets on.