Born in 2016 with intent towards inspired, transitive sub-genre blending San Salvador, El Salvador extreme metal musicians Witchgöat would innately channel the meaningful correlations between the extreme thrash metal of the mid-to-late 1980’s that’d fuel the escalating ambitions of the 90’s most favorably remembered black, death and thrash metal servitors. Their debut, ‘Egregors of the Black Faith’, is entirely appropriate as titular representation of the modus employed within as they connect the lineage from Point A (Kreator, Sarcófago, Destruction) to Point B (Nifelheim, Dissection, Aura Noir); A clear influential legacy of intricacy and beyond-violent blackened wrath informs the high-speed, riff driven attack of Witchgöat as a result. Though blackened thrash metal exists today in a major glut of well-worn imagery and dulled stylistic production design the art of composition is rarely representative of the ferocity of the old ways. Rote imitation has long and doubly cheapened the great works of old. From their first release, the ‘Umbra Regit’ (2018) demo, these Salvadorans have emphasized a classic extreme thrash informed sense of composition that aims for parity with (rather than imitation of) the classics and the quality of work is immediately evident. To so purely invoke Merciless‘ earliest works and with a hint of the unassuming complexity of Mutilator (Brazil) had my head spinning but, that demo did little to prepare for the full span of Witchgöat‘s sound on their debut.

Demo or full-length considered, “Emanations of the Underworld” in either fidelity expresses the core ethos of Witchgöat in less than three minutes as the moderately technical, hard-riffed guitar work of Teutonic thrash metal collides with the rasping, blackened and pulsating focus of early Necrophobic; For my own taste it is “Proliferation of Dark Souls”, with its Absu-meets-‘Terrible Certainty’ progression that succinctly communicates what these songwriters do with satisfying and inspired rhythm beyond that of many peer. That they would build upon legacy rather than imitate its facade indicates a powerful faith in the effective thrash riff and an understanding of what remains so freshly inspirational about the formative extreme metal produced in the 80’s and early 90’s. At this level of aptitude and appreciation Witchgöat nigh effortlessly achieve the spirit of classic central and south american metal on ‘Egregors of the Black Faith’. What is in it for the unprepared or uninformed listener? The distinction comes with the combination rather than the approach. What will read as old school extreme thrash metal colliding with their first wave black metal relatives does eventually stretch into second wave black metal refineries.

It’d be less obstructive to point where the riffs aren’t effective on this debut than it would to fawn over the great successes of ‘Egregors of the Black Faith’. Spirited moments of greatness ultimately outweigh the merely average details of the record where the sheer genius of “Beyond the Soil of the Dead” or “Emanations From the Underworld” tower over the expected chops of “Putrefaction of Souls”. Not every inspirational moment has its counterweight and the full listen does smear itself into one great mass of punched-up riff, where I think Witchgöat earn a few stripes comes with those unexpected moments where they string late 80’s and mid-90’s exuberance together; These pieces speak to the long-term metal fandom within as they sum the appeal of a handful of powerful ‘scene’ or stylistic movement into a four or five minute song. Where I become mildly skeptical of this conglomeration of dark souls comes with some repetition. I’d begun to wonder where the project could go next after I’d satisfied my curiosity for the details of these compositions. They’ve captured my curiosity at the very least, and I’d likely be satisfied whether they kept it true like Desaster or repeatedly morphed like so many others.

What comes next matters little in the realm of objective thought and what I can say is that this is an inspired undertaking that invokes the rawest of bestial thrashing the world over and injects a high-brained sense of melodic deconstruction to avoid pure meathead thrash syndrome. ‘Egregors of the Black Faith’ is a raw blackened thrash record that doesn’t waste a moment fumbling around, feigning ineptitude for the sake of barbarism; Instead Witchgöat offer spiked bludgeon to swing just inches from the skulls of their terrorized victim, the rapt listener. As such I can recommend this debut with some reasonable enthusiasm but, with the small caveat that this is one for the ‘true’ and the deranged thrash head. If that is you, the rest of Morbid Skull Records‘ output should satisfy your barbarism as well. 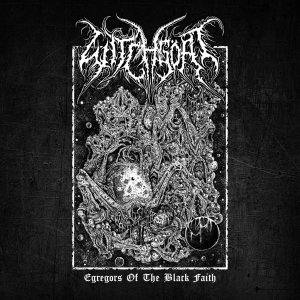