As the Pacific Northwest’s feigned greater social conscience begins to force its own hand in treating their vagrant and homeless populations as human beings, and less like an infestation of garbage piling rats to be stomped and shoveled, a little digging around quickly shows reasonable statistical correlation between increasing homelessness and severe cuts to federal mental health funding over the last twenty years. Public psychiatric hospitals began to teem with violence over the last three years in such an egregious fashion that a spotlight upon underfunded and understaffed locations briefly lifted the heart of the issue into public view: Effective long-term mental health treatment is not truly available to the socioeconomically vulnerable among us and this cruelly damns thousands of complexly afflicted community members as detritus and monstrosity among the callous. To grow up surrounded by the insane, the addicted, and a persistent criminal element might reasonably dilute a persons capacity for compassion for strangers but, at what point does your own complacent community involvement become so irrational that you’d believe a dog-eat-dog shuttering of the disturbed out in the cold won’t ever catch up with you? Seattle, Washington powerviolent grinders Endorphins Lost have been popping veins since 2009 in screaming, blasting and firing back the inherently absurd dysfunctional reality of not only society but existence itself.

Fascinated with psychological anomaly and in reflection of the growing violence of every day life the world over the sheer hardcore attack of this band has been undeniable since the release of their debut ‘Blood Pact’ in 2013. In the space of three years Endorphins Lost would better define their stature as a powerviolence band with ‘Choose Your Way’ (2016) and this thanks in no small part to their partnership with Earhammer Studios. The crust and hardcore punk influences were prominent in the same way that classics from Capitalist Casualties and Lack of Interest are but that fastcore-ish vibe would give way to sludgy late 90’s grindcore ideas as they worked their way up to this full-length with a split with OSK last year. I really liked that split and had a chance to see them live in Seattle last year where I’d say their live sound/performance is somewhere between classic Infest updated to the fidelity of a group like Iron Lung; ‘Seclusions’ captures that feeling pretty well as the band returns to Greg Wilkinson‘s studio for a second go at a full-length.

The full listen is about standard for a hardcore record at just over twenty minutes and Endorphins Lost are able to pack a thousand ideas into that brief and hard run. What impressed me most was their sense of ‘groove’ in tracks like “Nothing Beyond the Fire” and “Caduceus Rising”. I dunno if ‘old school’ powerviolence makes sense as a descriptor, it is genre about as re-definable as war metal, but I do feel like if it were ’98 this record would fly off the shelves under Slap-a-Ham or even Relapse thanks to its clear and present attack. ‘Seclusions’ shines at its best on tracks that teeter right on the edge of three minutes (“Seclusions”, “Two Minutes Hate”) where they show a reasonable knack for balancing brazen hardcore with discordant, hammered grooves. My own tastes do admittedly lean on the catchier 80’s hardcore influenced edge of fastcore but I find Endorphins Lost effortlessly speak to the spectrum of hardcore, classic powerviolence, fastcore and sludged-up grindcore sensibilities. Moderately high recommendation. For preview I’d say go with “Nothing But the Fire” and “Two Minutes Hate” and then gauge further interest with the duo of “Human Shield” and “Cold”. 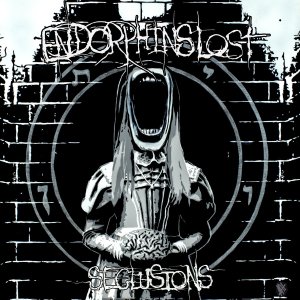