Whether you’ve worked too hard to no end, or partied your cluttered mind to shit, in an effort to stave off whatever latent dissatisfaction with life creeps into your thoughts every night there’s no mistaking the moment when you’ve woken up smacked with the fog of the consequence; A brief muttering lift of whatever denial sustains you. Strung out on life and reaching is an all too familiar feeling for generations of Southern California garage rock, stoner metal and punk music from the clap-happy surf punk of The Crowd and the buzz of The Zeros all the way up to Agent Orange‘s hardcore existential dread. Where it would collide with the garage-fuzz psych of Thee Oh Sees or the burly road-ready roar of Fu Manchu exists a very small clutch of lost minds, if any. So what sort of rumbling hell produced Warish? They point fingers towards the radiation-soaked clangor of ‘Static Age’ Misfits and grunge-era Melvins but I’d say the Oceanside, California trio have a bit of desert rock driving the van, too, as they inadvertently create a spooky hangover hell on their self-titled debut EP.

There are few holdouts from my teen years in the 90’s that’ve followed me unto today but my subscription to Thrasher magazine basically followed me anywhere I went and persisted far beyond countless punk and metal magazines who’ve folded hard in the last two decades. Anyhow, I would’ve never bought ‘Black Dots’ without that magazine and that loyalty stands along with a love for skate videos. So, I know well enough who Riley Hawk is and any/all of his videos show a skilled and creative street skater but, that legacy doesn’t really inform Warish in any meaningful way outside of the fact that skateboard folks tend to have varied and active taste in music across the board. This more or less comes across on ‘Warish’ where horror punk, surf rock, stoner metal all add up to a distinct psychedelic punk freakout that scrapes ass in 1-3 minute intervals. “Bones” two part jam more or less lives up to the promise of ‘Static Age’ fuzzed out horror but as the EP progresses through its 11 minute spin you’ll get equal hints of Kyuss‘ ‘Wretch’. That mixture of punk structures and bounding stoner rock at biker speed proves itself sound concept and really does recall the era of wry underground stoner music that’d follow the souring of mainstream grunge.

Sure enough this may feel like pure novelty to the addicted stoner rock/metal fandom but, I think folks who love the crossover between garage psych and esoteric punk rock will find this particularly heavy and energetic. The effects-laden sound is compelling for my own tastes and I think this shines the most on “Voices”. The songwriting is basic by design and while I feel where the groove is going Warish could spend more time fussing over the transitions and breaks that end up defining short punk rock songs over time. I’m giving a moderate recommendation for this because I’d written ‘Warish’ off as trivial at first listen then found myself coming back to a couple of the earworms here several times. Moderate recommendation. For preview “Voices” and “Shivers” were my favorites but the Wipers-esque riff that kicks off “Bones” should generate fast interest. 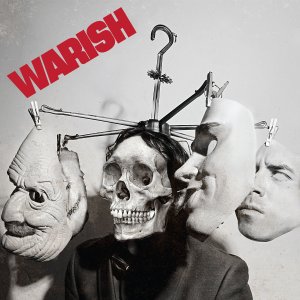