Though the Irish Christianisation of Scotland, and assumed conglomeration with the Gaels, would prove a greater detriment to the cultural traditions throughout the region later on, the ‘Pictish’ folk of the late Iron Age would band together as an unnamed but collaborative confederation of peoples in new medieval times to spite the growing invasion of Rome throughout the continent. Seven Pictish kingdoms sported warriors, said to have been tattooed or painted, who would engage and wear down every Roman campaign with what amounts to guerrilla warfare as they’d come. Septimius Severus most famously lead one of the bloodiest with his invasion of Caledonia (Scotland) between 208-210 CE. Severus and his son would eventually turn to genocide, eliminating entire clans that would not submit; Perhaps by some stroke of luck the political pressure from the sudden sickness and eventual death of Severus would inadvertently call off any further invasion or massacre. The early history of Scotland is no less trampled upon by invaders who often cruelly erased their artistic and cultural past through punitive expedition and conquest. A proud people, defined by necessary resistance, faced with centuries of callousness appear yet empowered by their land even today where the short-sighted homogenization of humanity appears just as Romanesque as it did thousands of years ago. Moved by ancient history and the scars left upon the land today Àrsaidh formed from Glasgow musician Andy Marshall‘s deep appreciation for the intertwining of his own heritage and the natural beauty of Scotland herself.

With the shift from Àrsaidh (Archaic) to Saor (Freedom) Marshall struck upon a genius balance of then-brimming atmospheric black metal instrumentation and Celtic folk melodicism with his second full-length ‘Aura’ (2014) with some additional boost in notoriety thanks to the employ of musician Austin Lunn (Panopticon, Seidr) on session drums. It seemed to be a new height for naturalist atmospheric/folk metal that’d arisen with influence from the Cascadian black metal and neofolk movements but looking back what lasting effect it carries comes from the use of indigenous melody and instrumentation. Folk metal surely carries a comical reputation among the less invested due to the jocular affect of many Norse hitmakers of the early 2000’s but ‘Aura’ used that folk instrumentation to heighten the atmospheric value of the modern, cinematic black metal style employed. In this sense both ‘Aura’ and the phenomenal follow-up ‘Guardians’ (2016) were equally indebted to violinist John Becker (Panopticon, Waldgeflüster, Austaras) and whomever worked in the use of tin flute lead melody. For my own taste ‘Guardians’ represented a triumph over the generally lacking musical value of atmospheric black metal’s post-rock influenced movements and as such I’ve retained that interest in Saor in anticipation of ‘Forgotten Paths’.

The fourth full-length from Saor comes bearing new performers in legacy-strengthening collaboration that will inevitably begin to feel all too brief for the expectant fan. At less than 40 minutes, the arc of the record appears as if haunted by a phantom limb. Where the respite of Gloria Lyr and Mirko Albanese ‘s instrumental “Exile” would normally give way to one last grand epic closer, ‘Forgotten Paths’ simply ends in quietude. For my own personal taste this brevity is actually a point of gratitude, though I loved the immersive quality of ‘Guardians’, as the record plays on a much more successful loop for those of us who must let the entire album unfold in one sitting. The title track is more of a triumph than expected as it should remind the listener of ‘Roots’ more than the two albums previous. The poetry of Neil Munro‘s more serious side (also featured on “Bròn”) is fitting for the rising post-rock progression set atop a more succinct and refined atmospheric black metal treatment. The inclusion of Niege (ex-Amesoeurs, Alcest) on this opener is neither here nor there for me as I do not find his vocal work distinct but, I do appreciate the subtle clean vocals as they appear. With three 10+ minute tracks comprising majority of the listening experience there is a bit too much pressure put on an average track like “Monadh” and the album would feel a bit mediocre if not for the grand sorrowful epic of “Bròn”. There is a feeling of writers block, or perhaps some bit of personal duress, that clouds ‘Forgotten Paths’ and as such I felt it more of a curation of ideas rather than a powerful execution of concept, at least compared to previous works.

As an embodiment of spiritual, naturalist atmospheric black metal I think ‘Guardians’ still stands as the main event in Saor‘s history but, I’d almost recommend ‘Forgotten Paths’ more enthusiastically to newcomers and folks who never paid close attention to the project before. It is a fantastic and impressive introduction that almost doesn’t stick around long enough once you’re familiar with the level of immersion that’d come prior. On a purely objective level there is an uncanny sensitivity among the grandeur of ‘Forgotten Paths’ that should offer some wide appeal beyond folks such as myself, who are inherently attracted to the melody and sorrow of their own highland heritage. My recommendation comes a bit lower than expected and not for lack of quality but for the thirst it leaves me with. Moderate recommendation. For preview I’d suggest the title track or simply watch the gorgeous video for “Bròn”. 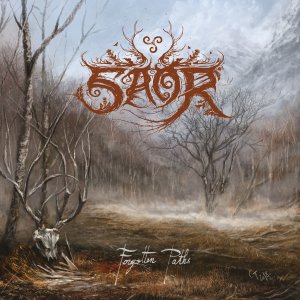