Anymore I think of the modern day punk rock record as I would an essay from Juan José Arreola, where the deeper I dig into the assumed meaning of absurdist mastery the more I reveal my own feckless naivete. As a teenaged asshole hating every option I’d ever been given in life, fuckin’ music for that matter, it was the 20 minute hardcore 12″ that finally had me pissing up a rope trying to write about music that excited me. What the hell ever mattered to me at that point, jerking off or getting high (or both), died screaming as soon as I’d picked up a few shitty Portland-assed 90’s zines and a Bad Brains record. As in El Guardagujas, the more time I let the artform (the punk rock record) spin a new and more fantastic yarn in my ear the sooner I’d realize how the inspirational anthems of punk music fed some horrified idealist empathy that I was expected to phase out of as I became an adult. In fact Dick Lucas‘ lyrics on Subhumans “No”, defiantly parroting that I’d grow up and I’d calm down, was frightening as a fully bought-in teenaged cultural fashion victim thinking he’d found a way out of the fucking cage; I’d follow the story from there to Citizen Fish where I dunno, he slowed down himself and by then I’d probably gotten laid for wearing an Operation Ivy shirt my parents had bought for me at some Hot Topic equivalent. We’d all given up by the time the late 90’s had finished spawning double-donged entrepreneurs cashing raw checks off of kidded teens feigned anarchy. Today the futility of growing up and not calming down is probably some kind of cosmic torture, somehow even worse than listening to Pleasants-era Suicidal Tendencies, yet I feel like less of a worthless heel in firing up Oakland, California punks Kicker‘s third full-length ‘Pure Drivel’. Not because they ‘get’ it or because they’ve re-lit that old idealism in my failing mind but, because they’ve finally shoved that pretense off a three story building and popped my skull like a melon.

You’re getting all that old straight-forward anarcho-punk spirit with some ’79 Oi! from the jocularly outrage of Pete the Roadie whose ‘fuck, whatever’ Micky Fitz-esque jawing lends a classic UK punk retch to Kicker‘s evolved form of post-and-pre-Gilman East Bay punk rock. Though Pete‘s presence was a big deal from the start I don’t feel like he made it a big stink until the band’s second album, ‘Rendered Obsolete’ (2016), despite how memorable the single for “Innit” was on the debut; There he and bassist Dave Edwardson (Neurosis) would trade off once in a while but Kicker wouldn’t truly feel like a ‘classic’ band until Pete‘d get weirder with his snot. Specific punk nostalgia is messy thing to work with because it can be a sore reminder that nothing was as it ever was; The twisted looks on my face after disproving any reminiscing over similarities with classic Conflict and Aus Rotten must have been priceless. I wouldn’t say Matt Parrillo (Dystopia, Mindrot) cranks far outside of the box on ‘Pure Drivel’ but this is a clean, composed and tightly wound record clearly not whipped out by drug-addled teenagers. That precision is even more pronounced throughout ‘Pure Drivel’ as drummer Dave Mello (Operation Ivy, Schlong) has a style that feels a bit more effortless than drummers previous. If you want to see the album as any kind of ‘throwback’ beyond its songwriting, flick on a pair of deeply rose-colored glasses and pretend this isn’t a professional record from way old pros.

That old feeling and this new fidelity is the knife that the war-disturbed veteran would use to slit their wet-nurse’s throat before escape and it is a glorious sort of violence when it works. My favorite example might be the return of Discharge circa 2002 but, it is all the more exciting when those names we know crank out a new original, so I appreciate that this certifiable ‘supergroup’ don’t appear to be screaming ‘remember us, you fucking cunts?’ at any point. What I love about ‘Pure Drivel’ is that you’re getting a raw point of view, a personality and an attitude that persists by ‘classic’ means but isn’t a forced chunk of worship. The tracklist is a minefield for the overly serious listener and a few key moments will diffuse anyone who’d show up to a Kicker album looking for a call to arms or revolution; Instead Pete‘s a storyteller, a man of many gripes who’ll have just as many jokes to tell, and this comes up front with the Biafra-esque “Mrs. Arnold” and doesn’t let up ’til the excessive end of “Goodnight and Fuck Off”. That mix of California hardcore punk and UK ’82 should feel like some sort of long forgotten mid-80’s record that has been remastered for 2019 and I’m grateful they haven’t phoned in the songwriting.

I’m still an irritable shit, though, and there were a couple tracks here that I’d ended up skipping over beyond the tenth or so spin (“Goodnight and Fuck Off”, “Wankers on the Bus”). The strongest points of interest for my own taste came when Kicker were at their most straight forward, “Down in the Bunker” is so pure I had to check if it was a cover, “Can’t Sleep” could very well be my theme song for the last few years, and I really liked “TL: DR” if only because I got more Edwardson circa ‘Pain of Mind’ (with a brief Blatz-like progression on the side) thanks to his shouts. Again, “Mrs. Arnold” is a centerpiece that comes after the almost melodic hardcore intro track, it resonated with me a bit like The Business circa ’97 when they’d comeback from the flop of ‘Keep the Faith’ going a bit harder. I could go on but each of these songs has its own appeal, some better than others, and the overall “Fuck off” of the experience resonates longer than any of the catchy punk songs within. I had fun with ‘Pure Drivel’ and I’d give moderately high recommendation of it to the punk inclined. For preview I’d say “Pure Drivel” or “Oxycontin and Vodka Pills” are good introductions to their sound and “Down to the Bunker” is my favorite but, “Mrs. Arnold” makes the most compelling first impression. 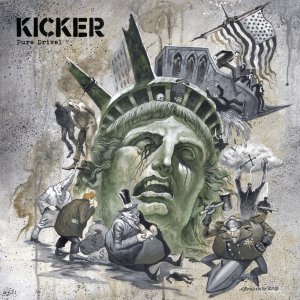