Paris, France melodic death/doom project Monolithe have undergone notable transformation over the course of the last four years. From the ungodly sheen of their first decade as a funeral doom duo unto the synth draped pulses of modern melodic death/doom beyond, the conceptual prowess of Monolithe evolved with impressive form through greater musical ambition and nigh sludge toned listenability. There is no expectation of stable live performance ingrained into the extreme doom metal project of today solely because many of these types of projects are solo or hobbyist works. Monolithe were always a grand production but I’d assumed a studio only venture for whatever reason. Their greatly layered sound surely had some potential but when presented with a live performance I’d wondered how it’d translate into a live recording. ‘From Equinox to Solstice: Live at Beltane’ expresses with plenty of impact and carries over most, if not all, of the dynamic quality that their full-lengths are known for.

Recorded in March of 2018 as a private live performance during Les Feux de Beltane, a weekend music and beer festival, ‘From Equinox to Solstice: Live at Beltane’ is all the more impressive as a death/doom live recording thanks to clear and present fidelity. The recording appears well-engineered in the first place and there doesn’t appear to be a ton of post-recording tweaking necessary. The lush effects present on several tracks from Monolithe‘s 2018 full-length ‘Nebula Septem’ are fully audible and thankfully not left weak. A good majority of the tracklist features material from that most recent record and acts as a solid arrangement of highlights. A lightly redacted version of “Ecumenopolis” from ‘Zeta Reticuli’ (2016) and a 12+ minute rendition of the 52 minute ‘Monolithe I’ (2003) offer both stark and moderate contrast to the set list, the desolation that had warmed over into the twisted movements of ‘Nebula Septem’ does a great job of suggesting the full range of Monolithe‘s oeuvre without the need for a three hour concert.

If you are not familiar with the melodic death/doom side of Monolithe I would consider it among distant relative of Skepticism and Shape of Despair in terms of tone and presence but, modernized with a glowing fusion of atmospheric sludge metal and lightly progressive death/doom metal influences. I am such a fan of ‘Nebula Septem’ that I am still moved by the progression of “Engineering the Rip” and “Coil Shaped Volutions” even after listening to that record for most of 2018. The cosmic doom of Monolithe captured as a live performance never suffers from any sonic thinness or awkward stutters and as such I can recommend it, even if just as a primer for their impressive discography thus far. A live album presents a challenge in preview so, I’d recommend the intro and “Coil Shaped Volutions” to gauge general interest. 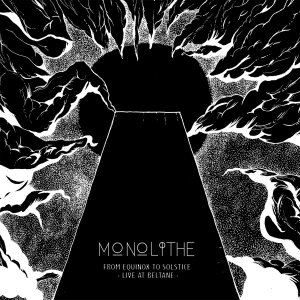