The great pulse of radiation emanating from the Los Angeles, California area is distinct in its depraved opportunism, where thoughtless determination herds shit-eating mice by way of rats well buffered from the greater suffering of others. The closer you move towards the heart of the city the more clear its stratum of constant redefinition and failed compartmentalization show, unveiling both the city’s age and unnatural, tumorous rate of growth. Greed and power provide best for their ilk and offspring under blatantly corrupt regulation; The pervasive belief among United States citizens that opportunity presents itself most often in greatly diverse and concentrated populations is inherently dehumanizing to those who live meagerly on the fringes of great metropolis by their own persistent wills. Yet without this scurrilous dystopic competition among men we would not have the skateboard, the laser, or the electric guitar. Serious achievements aside, the great fucked-up on drugs traditions of hard rock n’ roll are still alive within that radioactive, heavily polluted soil of desperation; The proof is in the retro-heavy rock pouring from every subdivision of LA. Those who refuse to be grounded by the modern public damnation of rock n’ roll have long persisted, as they erupt in concurrent waves that align the gradual decriminalization of incredibly potent medical grade marijuana within southern California. This new obtuse sense of freedom spreads now across the states as the old ways of heavy psychedelic rock spike most-high ears within fantastically underground sect; Heavy rock is something special again in newly freed skulls and this greater boon quickly becomes too much of a flood for the inferior ocean drainage systems in old corroded Los Angeles to handle. Case in point would be the monitor-stomping flurry of proto-doomed ‘heroin’ hard psychedelic rock by way of musician TJ Lemiuex and the rest of this Deathchant crew.

From the inside looking out this type of music is no cosmic revelation but an inadvertent riff upon the spooky post-Sabbath clangor of Ningen Isu [人間椅子] and the wailing, noisome ruckus of early High Rise given four generations worth of Orange Goblin-nization and topped off with a blast of Sasquatch-esque production values. The major difference is that Deathchant propels this excess through an unforgettable slinging of early heavy metal’s dark rhythms. The bad trips of mid-to-late 70’s heavy psych achieve skull-spinning rebirth in the glossy-eyed, blues-fed groan of this intricate and absorptive guitar rock album. It isn’t a spooky rehashing of Pentagram or Sir Lord Baltimore so much as it is a true honing in upon the chaos of blues-breaking psych rock and the heavier, updated rhythms of our current twenty-first century post-Kyuss / post-Electric Wizard buzzing. ‘Deathchant’ is bounding and restless, confident in its push for something ‘bigger’; This struck me in the same way that made debut records from The Atomic Bitchwax and Slo Burn special and/or memorable in their day.

So much ‘stoner’ music today so heavily relies on a ‘stay cool’ delivery, a sort of transcendental flatline, suggesting sunglasses at night levels of ‘we got this, bruh’ and that flaccid, geekish confidence is impossibly tired in 2019. Deathchant appears howling, wailing, and riffing harder than thou whilst amping their level of in-your-face deathly heavy rock on this debut to the point of surreal fixation. I warmed to its black magic the moment Lemiuex’ dark soul began to spiral into chaos halfway through “Pessimist” only to snap back into the groove. Each track has its point of interest be it the Windhand-esque doom of “Control” to the soulful mid-70’s Sabbath (alternately early 90’s Trouble) grind of “Hex” and those moments typically feature fine and highly memorable dual lead guitar work. These leads beautifully extend the life of an otherwise memorable-but-average heavy rock record that relies on clever leads, straight-forward song structures, and a huge set of balls to stick within the mind.

My experience with this record left me consistently without words for roughly three weeks after the initial listening sessions. Surreal and heavy as it were, the ‘Deathchant’ angle won’t seem so shockingly dark if held next to the suggested proto-doom of yesterday nor will it be as blissfully stoned as the stoner/heavy psych of today. Too heavy to fit into a box but not extreme enough to scare off the stoned ICU crowd’s positive mental attitude, I only wish all modern psychedelic heavy rock had such a way with atmospheric darkness whilst retaining a god-like grip upon guitar tone and licks alike. Highly recommended listening to fans of psychedelic rock, stoner variants of doom metal, and retro-doom/heavy psych vibes. For preview I’d suggest “Control” because it hooked me so hard but also “Trigger” to get the rest of the picture. 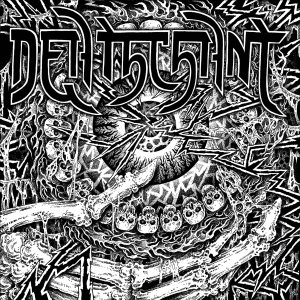