The Zoroastrian faith circa 500 BCE considered all bodily refuse beyond the soul as nesu, rotten filth that could not touch the sacred flame or the Earth without process. Excarnation of dead bodies, stripping them of flesh by way of vulture and drying for up to a year in the sun, was preferable to burning or burying. In great circular coliseums, dakhma, bodies lie arranged in three rings (men, women, children) exposed to the sun. As stripped and dried bone their skeletons served a central pit of lime that would slowly return them to the soil. What traditional appeal this practice held in the drying and grinding of the dead into dust might’ve served tradition longer than it did public health; As cities expanded nearby, the stench would quickly melt away those old ways in all but a few displaced Parsi (Persian) communities in India who still maintain these structures today despite mass carrion bird depopulation. The colonial British government of India would famously refer to them as “towers of silence” but today we might see them from afar as functional construction, rudimentary circular buildings serving as great treatment plants for human waste rimmed with vulture shit and carrying the stench of human decay downwind. If this rings as true desecration let it be morbid primer for the world of decorum (Sedlec) and disinterment (Douaumont) in the grand tradition of the Roman Catholic ossuary, where the bones of the unnamed dead exist today as spectacularly arranged tourism. What notions of sacred remains or ‘divine meat’ we leave behind upon death surely manifests from self-obsessed lunacy perpetuated by forceful monotheistic traditions today yet the grand graveyards, tombs, and monuments to the ancient dead remain as the most lasting and fantastic architectural accomplishments of man. The bricks laid in erecting Portland, Oregon death/doom metal band Ossuarium‘s debut ‘Living Tomb’ may carry a mere thirty years of rough death metal tradition but the structure itself resonates as an ancient towering monument.

Formed between musicians Ryan Koger (drummer for Portland doom lords Troll) and Daniel Kelley (guitarist for snarling OSDM mutants Grave Dust, and ex-Dragkhar bassist) in 2016 where the goal was exploration of old and lasting death metal pathology. In this sense Ossuarium have always been in good company as their ‘Calcified Trophies of Violence’ demo in 2017 saw the line-up filled out with by members of Portland black/doom metal projects Lowered and Hreinn. That demo was a goddamn beast that impressed enough to warrant Blood Harvest‘s release of both a pro tape license and a digipack in mid 2018. I might’ve been hooked in by the intro to “Chapel of Bone” as it lightly recalled Gorement‘s “Vale of Tears” and had my brain spinning with the possibilities. Where the bands highly atmospheric sound could go from there surely relied on the chance that they’d somehow keep that muddy burliness alive; To be clear they’ve kept some, not all, of that scrawled edge to please the general Spectral Voice, Innumerable Forms, and Desecresy fandom. ‘Living Tomb’ is more bravely ambitious than a big, shiny debut full-length -should- be and this immediately inflates their stature and echelon outside of the presupposed niche I’d placed them in beyond their demo tape.

Though it does initially appear as a panopticon view of cherry-picked death and doomed moments from the oldest Scandinavian spawning pools up to todays modern day underground reclamation, ‘Living Tomb’ busies itself with the journey it presents rather than dodging the vast influences Ossuarium boasts. Are they yet the Skeletal Remains of refurbished death/doom anew? Not exactly, but the Pacific Northwest quartet make a great case for a high taste level and general capability that’ll no doubt rake in renown for similar reasons. The most clear resemblance here is Ceremonium, as ‘Living Tomb’ specifically resembles their ‘Nightfall in Heaven’ EP, though Ossuarium include flits of modern Finnish obscurities (see: early Ascended) and the calmer moments from Dusk‘s ‘Majestic Thou in Ruins’ (see: “Vomiting Black Death”) which might also translate from modern psych-death influences. At no point does the spectrum of death and death/doom unblur in their hands as Ossuarium shapes riff-and-roar into eight separate pieces, each a finely-ground dust of ancient bone and fresh sacrificial blood.

One of two earlier reveals, “Corrosive Hallucinations” is a prime example of the bands modus as they juggle the jogging torment of God Macabre with the intricacy of ‘Lost Paradise’ era Paradise Lost unto a wailing end that Hooded Menace might’ve left back in 2010. How Ossuarium differentiates their underlying style from comparable sounding acts comes with their capable embrace of death metal rhythms just slightly outside of Scandinavian influence. You’ll want to reference groups like Spectral Voice or Disembowelment with initiate listens but the whole of ‘Living Tomb’ paces itself with far greater variation, dead-on with records like ‘The Ending Quest’ one moment (see: “End of Life Dreams and Visions” parts 1 & 2) and then ‘Onward to Golgotha’ the next (see: “Malicious Equivalence”). This keeps Ossuarium from sounding like a band all too obsessed with one take or style; The experience is surely still sub-genre worship but, built from multiple foundations rather than drip-fed plagiarism. Now, sonically speaking, ‘Living Tomb’ is a piece of art and no doubt Earhammer studios took their time tweaking the sound of this record so that the ambitious stylistic goals of the band could really sing on record. It is unmercifully thick but able to transition into atmospheric instrumentation, almost as if ‘Antithesis of Light’ were played at triple speed.

As a devoted fan of death/doom this is an easy album to toss around on the tongue and savor for several listens. The overall package is beautiful, though I prefer full color from Dan Seagrave, the ‘gold on black and grey’ effect is appropriate. Beyond the obvious appeal of this record I am equally impressed that a band like Ossuarium has a chance to put their best foot forward on their debut and to be frank there are few labels giving newcomers such a confident boost with stellar production, artwork, etc. ‘Living Tomb’ is the work of a thriving conception and it is made just as memorable for the fact. That said I think Ossuarium have bigger goals in mind and greater death and doom to curse the world over with. What they’ve come up with between their demo’s conceptual sound and the slick roll of ‘Living Tomb’ shows no lack of inspiration though in the scope of greater potential this debut is likely mere fruits of formative thought. Highly recommended. Previews won’t easily translate the full scope of the record but, “Corrosive Hallucinations” paired with “Writhing in Emptiness” will be instantly gratifying and “End of Life Dreams and Visions Pt. 1” should enthuse extreme doom fandom towards the full listen. 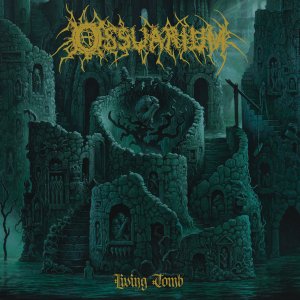