In worshiping mayhemic thrash metal altars, in giving themselves unto rapid-fire riff and nuclear howl alike Dunkirk, France based death/thrashers Mortal Scepter sought and achieved the dark recesses that connect Destruction‘s primal Teutonic rhythms and Quorthon‘s earliest envenomed speed metal hell just two years after forming in 2012. Their first demo in 2014 had such an impressive presence between echoing, puked vocals and classic death/thrash riffs enough to overlook the rough nature of the drumming. Those ‘Eternal Devastation’ by way of demo era Quo Vadis (Poland)  beginnings were already worthy of the thrash elite but by the time the band fired off their ‘As Time Sharpens the Sentence’ (2015) EP their ‘Pleasure to Kill’ era Kreator and early Sepultura influences had begun to express more vividly with slightly more advanced compositions; This short leap in overall quality signaled a band thirsty for classic death/thrash bloodshed and just about ready to achieve parity with the ’89-’91 explosion of death and thrash metal convergence. With ‘Where Light Suffocates’ the band achieves an authentic ‘period’ sound through a battery of savage extreme thrash riffs far too relentless to deny as they incorporate classic French death/thrash influences more overtly into their sound.

It may be considered a ‘niche’ sound to many at this point but for folks in love with thrash metal bands that crossed over into death metal extremity towards the end of the 80’s that period in the history of French heavy metal is vital footnote for grey area shared between both sub-genres. From early Slayer–ized thrash from Agressor and Loudblast to the murderous Death and Kreator influenced rage of Massacra many of the best death/thrash riffs ever written were achieved within a transitional point of France’s extreme metal evolution. To say that Mortal Scepter successfully emulate that scene and sound is clear but, not the full story as both guitarists remain dedicated to rhythms of albums like ‘Sentence of Death’, this inherent primitivism helps keep ‘Where Light Suffocates’ from coming across as full-on parody or imitation. Although Massacra‘s ‘Final Holocaust’ is a good starting point in terms of describing Mortal Scepter‘s attack and overall approach, nods to Loudblast‘s ‘Sensorial Treatment’ era along with a semblance to the self-titled debut from the aforementioned Quo Vadis are likewise relevant; Though the comparison isn’t necessarily 1:1 in terms of sheer aggression, there is great accomplishment in making a solid death/thrash metal album that fits so easily beside the  legendary bands I’ve mentioned thus far all while not sounding like a carbon copy of anyone else. No, it isn’t ‘original’ but it is exemplar of the power of evil ‘old school’ thrash metal.

Decades of ancient thrash obsession predestines my personal enjoyment of ‘Where Light Suffocates’ and this makes it difficult to describe why one band might get the classic death/thrash sound ‘right’ whereas others don’t. It comes down to the multitude of riffs authored and whether or not they are strung together into memorable guitar-focused intensity. To be driven by clever or stunning compositions is vital to the success of any death/thrash record, it is even more important than production quality or guitar tone. I point to ‘Final Holocaust’ or its forbear ‘Pleasure to Kill’ as the necessary balance of ‘roughness’ and precision that acts as an implication of greater extremity without particularly great speed or studio trickery; Imperfect ‘raw’ sound that expresses incredibly well because of its structure. That isn’t to say that you’re getting a Demolition Hammer-esque blast fest, though as these folks aren’t fully married to the death/thrash spectrum in that sense; You can hear nods to classic speed/thrash metal bands like Razor (see: “Spear and Fang”) throughout and the moments you’ll remember most vividly are the big riffs of rippers like “Lust Spells” or the standout title track. My own tastes in death/trash really begin with bands like Insanity and Sepultura then quickly work towards Massacra, Messiah and beyond so, Mortal Scepter‘s debut was more or less a perfect fit from the moment the intro track began to play.

How much nostalgia fuels your interest in heavy metal might affect your interest in a band like Mortal Scepter. ‘Where Light Suffocates’ can absolutely serve as a gateway to ancient European death/thrash metal or merely resuscitate the weary listeners interest in the primal forms of the sub-genre; What this band does not do is reinvent or build upon the old ways as they achieve greater honed riffcraft and throwback atmospheric values. There will definitely be some crossover appeal to fans of ‘blackened’ thrash a la early Merciless (alternately, Vomitor) as well if only because of the albums raw-skulled sound and echoing shouts. The albums tracklist is well balanced, songs transition well with great distinction, and the full listen comes with ease for those inclined towards thrash metal guitar albums that express frantically rather than cerebrally. Because this is a heavy metal language that I am dedicated to, I rate it a bit higher than average out of sheer fandom and with an understanding of how the guitar work will express over years of listening. ‘Where Light Suffocates’ is complete and dramatically dark enough to sustain as a memorable and perfectly realized debut, I can easily recommend it. For preview the duo of “A Ray of Despair” and the title track are reason enough to buy the record but I would say toss in “Swallow Your Tongue” if your brain can’t see how blackened teutonic thrash and French death/thrash could possibly fit together on the same album. 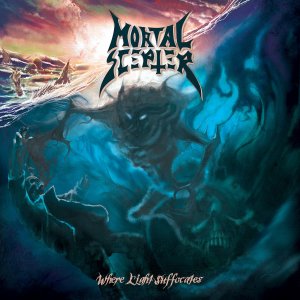