In chronicling the timeline of ‘creation’ unto anno 1241 Albericus Trium Fontium‘s ‘Chronica Albrici Monachi Trium Fontium’ sourced its information from Biblical text, medieval ‘epic’ poetry and the white monk’s own experiences. One such personal account came as he witnessed the defenestration of the Knights Templar, which he described as an “order of bearded brethren”. The Poor Fellow-Soldiers of Christ and of the Temple of Solomon were demons to the Muslim and paganistic world and murderous saints to the dominant forces of Roman Catholic rule throughout Europe. In hindsight it is inspirational to see common folk banding together and creating empire from naught but this order was comprised of opportunists, supremacists, and mass murderers that committed incredible crimes against humanity and culture throughout Europe and Mediterranean lands for roughly two centuries. These soldiers would be pivotal and essential forces throughout the Crusades, becoming just short of the first multi-national military corporation, endorsed emphatically by the papacy before their downfall by the hand of their debtor King Philip IV of France. This fight for the ‘holy land’ was so atrocious, so sickening in its cruelty on both sides, that it cannot be remembered as anything less than a darkest hour for organized monotheistic religion. As it turns out this historical aggrandizement of the medieval Christian holy warrior is just heroic enough in its bloody sword n’ shield zealotry to inspire a litany of fantastic ‘epic’ heavy metal records and Evangelist‘s third full-length, ‘Deus Vult’, is among the finest.

Formed a decade ago out of Cracow, Poland Evangelist can be taken as epic doom metal at face value based on their general discography; As much as I’d like to point towards ‘Tales of Creation’ and the finer hours of Messiah‘s presence in Candlemass the band’s style has evolved towards something closer to early Solitude Aeturnus (see: ‘Through the Darkest Hour’ and the first two). With ‘Deus Vult’ that ‘epic doom’ approach sees revelation through lessons learned in related project Monasterium but also further emphasizes their 80’s power metal influences. Vocalist Michał Strzelecki is a major part of this shift towards ‘cleaner’ epic heavy metal with a distinct tonality he’d developed fully on ‘Monasterium’ (2016) that continues to evoke the finest ‘true’ metal without going full on squawking 80’s heavy metal warrior. Ready established fans will quickly note that Strzelecki‘s presence on record comes with increasingly confident leadership and marked improvement in harmonization and cadence. The guitar work is surely just as important by virtue of this style of music but this tale wouldn’t be worth telling without his beguiling narrative.

Though the band’s main songwriters have been decidedly focused on medieval Christian themes beyond ‘In Partibus Infidelium’ (2011), which took from Robert E. Howard‘s ‘Conan the Barbarian’ and H.P. Lovecraft themes, ‘Deus Vult’ appears almost penant in delving into the mind and heart of a devout Knight Templar. “God wills it…” is first pious in tone, then menacing in context, and nearly ironic from my own point of view. It is such a challenging read in terms of meaning until the -actual- context of this narrative became more obvious. Evangelist are certainly a fantasy metal band that are toned dark by their swords of doom and the banners they carry offer lyric poetry that characterizes the zealot warrior, men driven by God to kill for religion. I felt this was really more in line with the 80’s heavy metal they’re obsessed with rather than a direct political statement. Death, glory, blood, iron, steel, etc. This is an epic doom metal record for the ‘true’ heavy metal fandom and as such finds a brilliant tonal balance between the epic heavy metal heroics of battle and the sorrowful doom of religiously justified killing. As conceptual narrative and inspired performance ‘Deus Vult’ is masterfully achieved.

Taken as a slow-motion old school power/heavy metal record, ‘Deus Vult’ is particularly memorable despite its belabored pacing. The first half hour of Evangelist‘s third record appears elevated, in terms of songwriting, above comparable efforts from bands like Altar of Oblivion and Crypt Sermon. They don’t edge out into the gothic realms of say, late 90’s While Heaven Wept, but the rather 80’s styled cadence of Scald‘s sole album. The only reasonable comparison might be The Temple‘s ‘Forevermourn’ if less focused on Solstice-esque riffs and more focused on Grand Magus style heavy metal. Evangelist stand in serious vestments among contemporaries without getting lost in the crowd, at least in terms of ‘Deus Vult’.

I took my time to enjoy this record and let it speak for itself across a handful of listens before I found myself reasonably obsessed with the first four tracks on the album, particularly “Memento Homo Memori” both for its soaring chorus and what I’d consider some of the best guitar work on the album. Everything comes together so well on the first two thirds of the record that I tended to be completely satisfied by the end of “Prophecy”. The last handful of songs on the record offer more structural variety as the first half features six minute epics all centered around rousing chorales a top big heavy/doom riffs. This is where the comparison to early Solitude Aeturnus comes in but also the more recent works of Grand Magus and Altar of Oblivion. Each produce albums that are epic, moving, grand, and devoutly heavy metal that go on for a bit too long by virtue of overstating one beautiful idea one too many times. With that in mind I can fully recommend ‘Deus Vult’ (as well as Monasterium‘s album) for fans of epic heavy and epic doom metal alike, it is a brilliant crossover of forms that leads with a pure heavy metal spirit. For preview I’d suggest “Memento Homo Memori” to start and then “Prophecy” if you showed up primarily for the Candlemass influenced glory of it all. 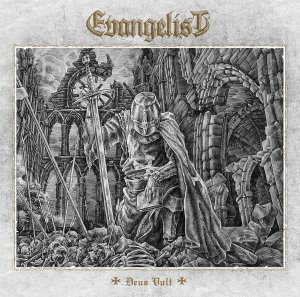