The fabled Ponaturi live in great cities beneath the sea only appearing above water in the night to snatch away the bones of Māori heroic lineage. With spells cast upon the ‘father’s bones’ they can manipulate time and space with presumably ill intent, though in Māori mythology these ‘sea goblins’ are little more than insidious gremlins easily defeated by exposure to sunlight. Whether they are referencing non-troll related mythos or specific venemous stonefishes I’m not sure but Norwegian atmo-crust fiends Nag are pretty up front about a pact with some kind of insidious ancient creature of the sea in the incantation of their shotgunned hardcore riff ‘n scream sophomore album ‘Nagged to Death’.

Nag may or may not ring a bell with blackened hardcore fans who may or may not have associated them with the uptick of that sort of band post-Kvelertak uprising. Having been nominated for a Norwegian Grammy for their first album the pressure to crank out a catchier and more accessible record doesn’t seem to have affected the outcome of ‘Nagged to Death’. If anything they’ve gone in a faster, harder, louder direction in fusing the pulse of Scandinavian metallic crust with their own homage to Discharge‘s ‘Why?’ era of noisome furor. You’ll get a slight waft of that first banging Kvelertak debut on a few tracks (see: “Fatherbrand”, “Who Will Save Us From Rock ‘n Roll”) but even then Nag lean into their harsh delivery as if possessed by a nascent All Pigs Must Die (or Massgrav contemporary). It is a pure, skin-ripping hardcore record with a load of extreme noise dressing up a pretty simple set of songs; Devoid of any major or overt exploration the verve of ‘Nagged to Death’ has far more in common with Septic Tank than it does say, Baptists.

There is no shortage of Scandinavian bands finding interesting extremist takes on Discharge but few offer more than cranked imitation of the generations since. Nag express their points of view with some genuinely spirited riffs as ‘Nagged to Death’ comes from a distinctly frustrated place but, also from a group of guys who seem legitimately enthralled with the possibilities of classic hardcore extremism. The big sound, buzzing guitar tone, echoing vocal, and death-like bursts of brutality (see: “Nagged to Death”) all point in a solid direction for the band but for all of that enormity I’d hoped for more clever riff craft and bass tone to create hooks that’d encourage me to spend more time with Nag; At the very least a few more “No Rest For the Blessed” moments to dig the claws in a bit.

No doubt I’m a fan of this stuff but it took a few spins to not see Nag‘s second album as a merely average and hardly memorable outing. I’m not saying it blew me away in the long run but I appreciated ‘Nagged to Death’ more once I’d figured out the pros and cons of the tracklist. I can recommend this record for its sharper, catchier moments but those never really stack up neatly on either the blackened hardcore or crustlord sides of their fence. They could have swung into the ‘n roll side of things harder but ultimately I appreciate that they just went hard and put out a ripping hardcore record. For preview I would recommend “Fatherbrand”, “No Rest For the Blessed” and if you make it to “The Story of My People” you’ll probably be geared up for the whole spin. 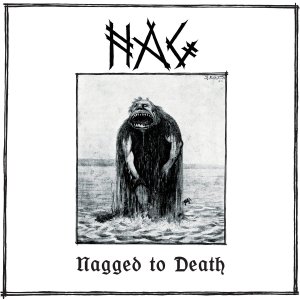