The average human being tied down to the sludge factory hell of their moderately dependable employment, low-balled wages, and severely dependent personal relationships is spiraling out of control as we speak. Amidst consistently failing public mental health the lowest ‘rock bottom’ any privileged asshole can hope to bump with their bent-ass tailbone is not getting enough attention on their goddamned social media accounts. Further damned by the corporate machinations that ease us all into our incontestable uselessness unto the future of mechanized life, warfare, and robotic sexual gratification mankind’s doom is a meme perpetuated not by human ignorance but by consistent selfish fucking fixations on the proverbial smell of their own ass. If you’re not crippled by a random mass shooting, dead due to an inability to crowd-fund your goddamned insulin, or isolated towards your slow mental death in for-profit prisons you’re not a real goddamned American anymore. There is mania in every day life for those of us both surrounded by idiots and incapable of realizing that we’re one and the same. Chances are you’re one of millions of unchallenged, unthinking creeps living a ham-strung ‘always online’ life defined by nature’s cruelest point of defeat: Snark.

There is a great point of desperation where consistently honed parody of idiots becomes a precision skill and resistant infidels produce an ass-like braying that begins to resemble all to much of the reality we’re all trying to escape. At some greater point of escalation it just clicks in your head; You either care too much and become an extremist or you stop caring and you become a pristine little shithead snacking on the bones of whoever’s neck you slashed to get ahead in life. And for all of the crazed, mildly paranoid, perhaps not sexual enough raving I could do as a lunatic who is locked in protest and defiance of the moderate stupidity of man I’m nowhere near the artfully absurdist wig-snatching ‘n cum-flinging of Intercourse‘s maniac frontman Tarek, who drives their New Haven, Connecticut hardcore/noise rock blender with one arm hanging out of the driver’s side window. But hey, who needs arms when you’ve got a guitarist like Jay whatever-his-name-is who found this eruptive left hand path between the full blast of ‘We Are the Romans’ gnarly intensity and early 90’s noise rock clangor (see: Unsane, Jesus Lizard) and that same era of hardcore. I’d initially described ‘Everything is Pornography When You Have an Imagination’ as a powerviolence band covering Helmet‘s debut with shouter who could out-puke Pissed Jeans in a give-me-a-headache contest but I’d thrown in some early mathcore influence as well.

The beauty of Intercourse comes in the intermingling fluids of tightly wound hardcore variations, precise noise rock tangents, and how they all work with the ranting and raving vocal style. It takes me back to my years spent obsessing over mid-80’s Black Flag records like ‘In My Head’ and the similar revelation of The Jesus Lizard‘s noise rock/post-hardcore genius on ‘Head’ but all of this comes with an extreme metal level of immensity; That sound isn’t old school but it is hardcore, but it isn’t traditional hardcore and it isn’t mathcore but it has equal measures of mathcore and noise rock included. I’m sure other bands could work out a mixture of these elements but, few whip it together as good as these guys. They pack so much into this half hour record that Intercourse do well to flex their hardcore punk informed sensibilities and fuck off quick, too. I love a hardcore record that knows when to duck out and it make jumping in and out of Intercourse‘s hole of frustration a breeze.

From absurdist humor to its sexually frank rants a dripping, outraged sardonic parody defines the mood of ‘Everything is Pornography When You Have an Imagination’ that feels all the more unhinged and irascible thanks to the sharp clank of Intercourse’s sound. This is a fair leap from the band’s earliest recordings which felt more post-hardcore a la those first two messy Converge albums if they’d been listening to some Drowningman here and there. With the new guitarist it feels like Intercourse are bringing their best material and making a grand, notable statement with this first full-length. Even the jump from ‘Pissing in the Abyss’ 7″ from 2016 is pretty damn admirable where they seemed to be hitting a wall of slacking inspiration. I’m not saying they sucked but this record is just a leap beyond expectations stemming from their past.

I’m as surprised as anyone else is that this is among my absolute favorite noise rock and hardcore releases of 2018. Not because I need a big name or a fancy nostalgia pill to be sated but because Intercourse dropped in my lap and ground out a damn fine hardcore lapdance before I knew what’d happened. It helps a great deal that I received the vinyl for review because I had weeks to marvel over its packaging. I am a covetous, pretentious collector-creature and although it isn’t a gatefold the glossy insert and lyrics for ‘Everything is Pornography When You Have an Imagination’ really adds to an already beautiful thing. This is one of my highest recommendations of 2018 and in the top twenty releases of the year for my own taste, not just for the noise rock/hardcore style but all of the crazy shit they do with it. For preview I’d say where you start depends on your comfort with non-traditional hardcore guitar work “Piles” sucked me in immediately and the closer “Cum Kind of Monster” really serves as the saliva that’ll work the record up your throat and into the brain. 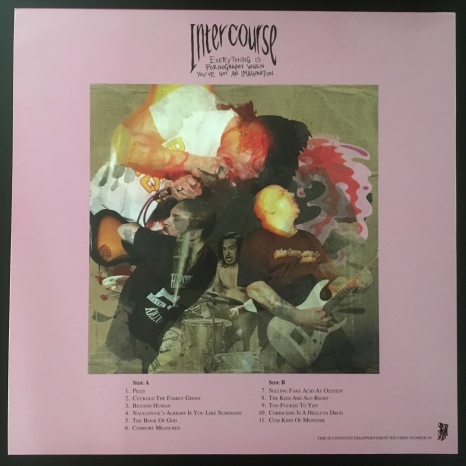