In love with the first wave of black metal and resembling its concurrent influence upon Teutonic thrash metal scenes, German blackened speed/thrashers Witching Hour notably describe their sound as ‘ancient black metal’. This indicates a certain intention they’d most obviously fulfilled back in 2009 with their debut full-length ‘Rise of the Desecrated’ with its ‘Endless Pain’ black/thrash style. From that point on they’d grow restless of that typical, and several generations deep, imitative style and begin to swerve from a ‘Show No Mercy’ style of riff unto epic heavy metal influenced thrash that verges on the fringes of progressive-isms beyond ‘Past Midnight…’ (2011). ‘…And Silent Grief Shadows the Passing Moon’ continues the thread the band had first established on ‘Where Pale Winds Take Them High…’ back in 2014 as their blackened thrash sound evolves into a style that is increasingly all their own.

For a seemingly rote retro black/thrash project out of Rehlingen, Germany to develop so steadily into their own thing deserves some mention as their combination of epic heavy metal, progressive thrash, and fleeting black metal influences are no less ‘retro’ but all the more unique among peers. Blackened heavy metal is no rarity the world over but ‘…And Silent Grief Shadows the Passing Moon’ represents a grey area of modernity and old school heavy metal somewhere between the first wave blackened death rock experimentation of Crucifyre and the sort of heavy rock influenced groove of Chapel of Disease in 2018. The rocking kicks of early Venom are still in the back of their minds but Witching Hour begin to venture unto an elevated form of epic heavy/speed metal a la up-and-coming groups like Chevalier that is moderately comparable (but better than) to long developing Bewitched-esque bands like Skelator and Manzer.

In evaluating a retro focused band’s departure from typical beginnings it is initially difficult to see ‘…And Silent Grief Shadows the Passing Moon’ as a retro or modernist affair. At face value it is a slick and very successfully -grooving- mix of semi-melodic thrash guitar work that acts as a full extension of the guitar ideas touched upon ‘Where Pale Winds Take Them High…’; This is about as far as Witching Hour can take that sound without becoming an entirely different band and thankfully they’ve not lost the black/speed metal feeling introduced on their second full-length. When considered as a ‘retro’ project the record feels obscure but not particularly ancient in the mix; If taken at face value without any pre-concieved notions of inspiration and/or generational worship Witching Hour have put together one of the more successful modern thrash records of 2018.

The 10+ minute opener “…And Silent Grief Shadows the Passing Moon / Once Lost Souls Return” essentially begins as some kind of black/speed metal take on The Chasm with a gloriously epic intro and a building traditional heavy metal lead-in that evolves into a set of side-bars and tangential riffs typical to records like ‘Farseeing the Paranormal Abysm’. I don’t believe Witching Hour are aiming for pure riff salad but the similar tone and techniques create an album that doesn’t differentiate vastly from song to song. Vocalist Jan Hirtz modifies his expression this time around from old snarls to listless existential wails among dark fantasy lyrics and in turn embraces the change felt within guitar compositions. Though I would call this sound ‘epic blackened speed metal’ in lieu of the non-specific nature of ‘ancient black metal’ the mystic quality of ‘…And Silent Grief Shadows the Passing Moon’ allows either interpretation to work. It grew on me slowly and soon proved itself as one of the finer releases from December this year and as such I can highly recommend Witching Hour‘s latest. This’ll be a tough one to preview as a lot of its best qualities reveal through variations on a theme rather than ‘singles’. I’d recommend starting with either the two part opener or jumping directly into “Behold Those Distant Skies” with the understanding that most of the album builds up to that point with several peaks. 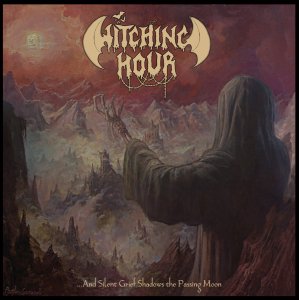